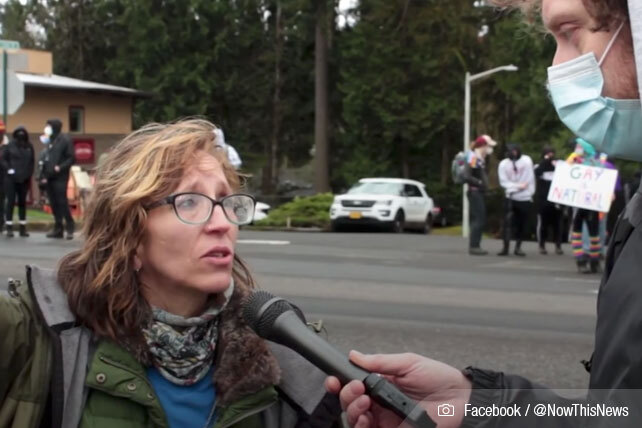 They said it was hate speech. But if this is hate speech, then what can Christians say? Check out what people at the rally sponsored by Rivers of Living Water United Pentecostal Church in Sandy, Oregon, on March 20, 2021, had to say. The “Prayer, Faith & Freedom Rally to Celebrate the Natural Heterosexual Family” involved LGBTQ protesters, the Portland Proud Boys, and a YouTuber who stopped by to interview all who were involved.

A report by Portland, Oregon’s Willamette Week described the scene driving down Pioneer Boulevard in the town of Sandy that Saturday. There was a church rally celebrating the natural heterosexual family on one side of the street and on the other side a party/peaceful protest called “Have a Gay Day” attended by the town’s LGBTQ community.

Rivers of Living Water United Pentecostal Church’s pastor Russell Collier, who has been a pastor for over 20 years, wore a sweatshirt that read “Living Faith in Jesus.” He held an American flag while he prayed and then spoke about biblical sexuality, abortion, and freedom at the rally. Collier was accompanied by members of the Portland Proud Boys. Although the pastor didn’t invite the Proud Boys, he said he “appreciated their support for our right to freedom of speech.”

Collier shared during his speech that the church invited the LGBTQ community to an open discussion with them a month ago and no one showed up. He said no one came “because they hate the light.”

“I believe that the natural family is under attack,” Collier said. The pastor shared that he had a phone conversation with a current family member who is struggling with homosexuality and told him that his purpose isn’t being gay; “it’s your potential, but it’s not your purpose.” He said the young man’s purpose is to grow up and become a husband and father.

YouTube journalist Jake Silberman showed up at the rally and asked a woman from the church’s side of the street if she thought that being gay was a choice? “It is a choice. I believe that firmly,” she responded. She told the journalist that she “had some bisexual interactions” at one time in her life. But she said, “I have repented from those sins because I know they’re wrong…If you don’t accept Jesus Christ as your Lord and Savior, you will go to hell.”

Sliberman asked another church rally attender: “When you see a happy gay couple, do you think that they need to find a straight partner?” The lady paused for a moment, then told the journalist, “I think they need to find Jesus.”

When interviewing one of the protesters supporting the LGBTQ community about what she saw as hate speech, the girl shared that she “was taught that Jesus loves everybody regardless of who you are.” Questioning the church rally across the street standing for heterosexual family, she said, “So when I see Christians out here saying, spouting, like hate messages, like, ‘You’re not natural if you’re gay,’ it’s really hurtful and I just hope that we can teach our youth that, you know, Jesus loves you no matter who you are.”

A young man who is involved with the Students Advocating for Equality (SAFE) interviewed by Silberman called the church’s event a rally that displays hate. The SAFE advocate and LGBTQ supporter said he is there to show “people that aren’t necessarily native to this town, that are going to be passing through, that there’s more support for equality than there is for hate.”

Portland Proud Boy’s Vice President ‘Flip’ Todd told Silberman they showed their presence and support because the church “felt that there might be some threat as they tried to express their first amendment rights and that there might be a counter protest.” After the journalist explained that some of the Portland Proud Boys tried to intimidate him, Todd told Silberman, “We hate the media. I can’t stand the media.”

Witnessed from the interviews by Silberman and the rally’s video from their Facebook page, the church appears to only speak about their beliefs from the Bible and to those who gathered near their tent. Apart from the Portland Proud Boy’s spouting foul language and hand gestures, everything remained peaceful.

Pastor Collier’s speech at the rally can be watched on Facebook here.