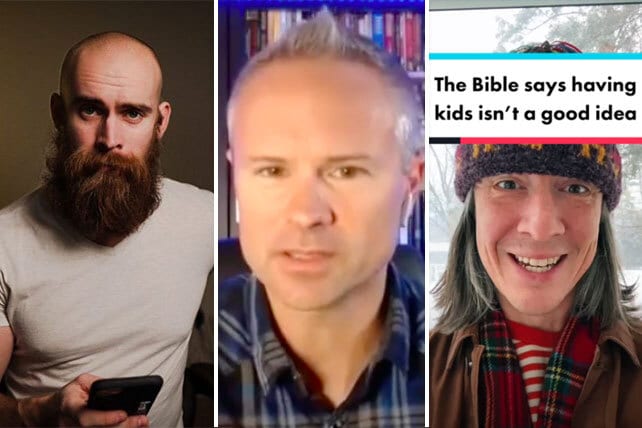 “Deconstructing,” a term often used to mean “leaving Christianity,” has become a hot topic in the wake of renunciations by people such as Paul Maxwell, Josh Harris, Marty Sampson, Jon Steingard and Abraham Piper. In an interview with Faithwire this week, apologist and author Sean McDowell, a professor at Biola University, offers insight and advice for Christians who feel shaken by those headlines—and who want to know how to react to the apparent rash of prominent Christians leaving the fold.

People rejecting Jesus isn’t new, says Sean McDowell, but lately that phenomenon is being framed differently—as a “cultural moment” of declining religious identification. Not only does social media now provide a platform for people to share and access deconstruction stories, but American culture promotes self-expression and being true to oneself.

Media coverage also plays a role, McDowell says, noting that it’s “more salacious” for the press to cover John Piper’s son who criticizes and debunks Christianity than his son who follows God and conducts ministry. Likewise, McDowell adds, it’s more of a journalistic scoop when a prominent leader’s offspring breaks away from the faith (such as Tony Campolo’s son Bart) than when a prominent leader’s offspring follows in his or her steps (such as Josh McDowell’s son Sean).

America’s heated political climate might be another factor, McDowell says, because Millennials and Generation Z tend to be turned off by the conflation that you must be a registered Republican to be a follower of Jesus. “That doesn’t mean we’re not supposed to engage politics with our faith,” however, he adds.

It’s normal to feel “emotionally rocked” when people leave Christianity, McDowell says, but that also should motivate us to work on our own faith—which can’t be rooted in emotions. We need to ask ourselves why we believe, if that faith is our own or merely our family’s, who we think God and Jesus are, whether we consider the Bible to be true, and so on.

The next step, he says, is to apply that faith to our daily life and live it out in this fallen world. We’ll be “less tempted to jettison our faith because we have a good biblical theology,” he notes, “namely the sinfulness of human nature and our capacity for deception.”

McDowell, whose books include A New Kind of Apologist, reminds Christians that doubting is okay and is not the opposite of belief. Instead, as Jude 1:22 says, we should show mercy to people who doubt.

Questions are acceptable too, adds McDowell, and they offer opportunities to be curious and to dive deeper into our faith. “If there’s any religion that’s okay with questions,” he tells Faithwire, “it should be Christianity, because it’s actually true, and we have a powerful history of brilliant thinkers…offering thoughtful answers.”

How Christians Can Respond

Regarding how to proceed when loved ones deconstruct, McDowell advises Christians to “keep the main thing the main thing” and to focus on issues that are essential for salvation. For example, “You can be a Christian and not believe in [biblical] inerrancy,” he says. “You can know Jesus rose from the dead historically through a book that has some errors.”

“For me, the heart of the issue is who is Jesus,” says McDowell. And when that serves as your foundation, doubts and non-essentials won’t cause your faith to collapse. By contrast, people who have grown up hearing that the KJV Bible “dropped from heaven” without a single error are prone to having their “entire faith come crumbling down” when they encounter a sticking point.

Welcoming people’s doubts and letting them know you’ll “love them no matter what” is vital in today’s churches, McDowell says. “People don’t feel relationally safe, and that has devastating consequences.” Many people who leave Christianity suffer “emotional wounds” because of how they’ve been treated in church, he notes, so “relational healing” is often necessary before they’re ready to engage in faith-related conversations.