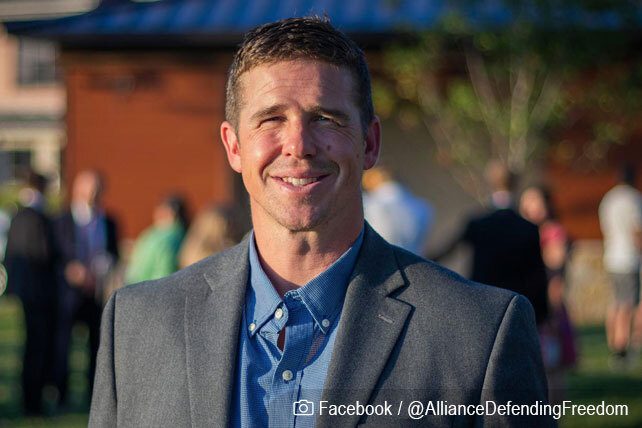 UPDATED Sept. 2, 2021: Tanner Cross, a Christian P.E. teacher in Virginia suspended for comments about his school district’s “gender-expansive” policy, has won another victory. The Supreme Court of Virginia upheld the ruling of a lower court judge that Cross’ suspension was “unnecessary and vindictive.”

“Teachers shouldn’t be forced to promote ideologies that are harmful to their students and that they believe are false,” said Tyson Langhofer, senior counsel for Alliance Defending Freedom, which represented Cross, “nor should they be silenced for commenting at a public meeting.” Langhofer continued:

The lower court’s decision was a well-reasoned application of the facts to clearly established law, as the Virginia Supreme Court found. But because Loudoun County Public Schools is now requiring all teachers and students to deny truths about what it means to be male and female and compelling them to call students by their chosen pronouns or face punishment, we have moved to amend our lawsuit to challenge that policy on behalf of multiple faculty members. Public employees cannot be forced to contradict their core beliefs just to keep a job.

When Virginia P.E. teacher Tanner Cross spoke out against his school district’s proposed “gender-expansive” policy, he did so as a citizen with protected speech rights. That was Tuesday’s ruling from Judge James Plowman Jr., who ordered Loudoun County Public Schools to immediately reinstate Cross.

The district had suspended Cross days after a May 25 board meeting at which the teacher said, “It’s against my religion” to “affirm that a biological boy can be a girl and vice versa.” The suspension, the judge said, was “unnecessary and vindictive.”

The policy under discussion would require school staff and students to use a student’s preferred name and pronouns, “regardless of the name and gender recorded in the student’s permanent educational record.”

During the public comment portion of the board meeting, Cross said, “I am speaking out of love for those who suffer with gender dysphoria. I love all of my students, but I will never lie to them, regardless of the consequences.” He added, “I’m a teacher, but I serve God first.” Cross also mentioned a 60 Minutes report about young people who started transitioning but later regretted it.

The school district defended its action, saying the teacher’s comments were disruptive. But according to Tuesday’s ruling, only six parents called the school to complain. Five requested that their students be removed from Cross’ class.

The Alliance Defending Freedom (ADF), which filed the lawsuit on behalf of Cross, calls his reinstatement “a massive victory for freedom of speech.” ADF founder Michael Farris says, “Nobody should be punished for expressing concern about a proposed government policy, especially when the government invites comment on that policy.” He adds, “Educators are just like everybody else. They have ideas and opinions that they should be free to express.”

Judge Plowman agreed that Cross was “speaking as a citizen, not in his official capacity” and in “a forum where public comment was invited.” The subject under discussion “can only be described as a ‘matter of public concern,’” the judge added.

Loudon County community members are split—and vocal—about the gender policy, as well as Critical Race Theory. Rallies are being held, and some school board members have even received death threats.

After Tanner Cross was suspended, parent Beverly McCauley said, “I’m outraged, I’m furious, that a teacher who loves his job and his students is not teaching.” Another parent, Monica Gill, told the school board, “We will not let you have our souls or the souls of our children.”

But Cris Candace Tuck, a transgender parent, fears “hateful rhetoric” and describes having heartbroken children. “[My kids] know what the effects of things like misgendering and dead-naming can be,” says Tuck. “They’re really upset today.” Tuck plans to write to the school principal to seek P.E. exemptions.

The lawsuit emphasized that Cross “does not believe that every student or teacher in [the county] should have to accept his view. But he also believes that teachers should not be compelled to say things that they do not believe to be true.”