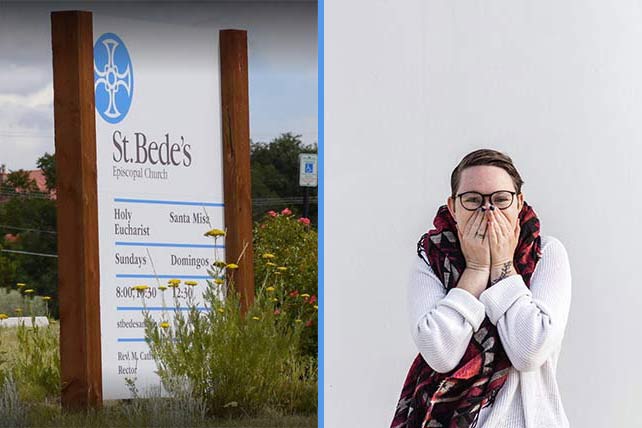 “I don’t know if this parish has ever funded a program with such a great impact. We were able to do it because every week we set aside 10% of donations to the church for outreach. Prioritizing service to others is our gospel imperative,” Rev. Catherine Volland said.

By partnering with the nonprofit RIP Medical Debt, St. Bede’s raised over $1.3 million that paid off the entire state of New Mexico’s household medical debt and even a few Arizona counties’ medical debt. The nonprofit buys debt for a fraction of the cost and pays it off with the help of donations, similar to a collection agency. RIP Medical Debt also contacts credit agencies after paying off debts which clears the credit history of those in debt.

The debtors will receive a letter letting them know that St. Bede’s donation helped erase their medical debt with no strings attached.

“I was having a hard time trying to figure out how I was going to pay all this amount of money and it’s not been easy finding a job especially when you have two kids and with this pandemic going on,” a recipient of the church’s generosity responded after receiving the paid-in-full letter. “It has really been a very hard year for me and for everyone. I would love to thank personally that special person that helped me with my account. I am so thankful and I just want to say God bless you always.”

St. Bede’s is a church that’s known for taking care of its community. One of the church’s regular attenders said, “It’s great to know that we do more with our donations than just serve our own church. We reach out to our local community and all over the world.  In a time when so many are struggling with medical concerns and costs, this partnership with RIP Medical Debt seems so in tune with our mission to ‘Celebrate God’s Love for All.’ ”

The church is hoping its example encourages other churches to do the same.

Other churches like St. Bede have partnered with RIP Medical Debt to help pay off people’s in their community and state medical debts. Covenant Presbyterian Church in Austin, Texas, helped erase $10 million of medical debt for people in the area. Crossroads Church in Cincinnati, Ohio, erased 45,000 families’ medical debts after paying off $46.5 million. Grand Rapids First in Wyoming, Michigan, used $15,000 to pay off over 1,800 people’s medical debt. And $15,000 from a Maryland church, Revolution Annapolis, freed 900 people from their medical debts. Covenant Church in Carrollton, Texas, paid $100,000 covering almost 5,000 families’ medical debts. An evangelical Presbyterian congregation in Columbia, Missouri, The Crossing, wiped out $43 million in medical debt for thousands of people throughout their state. These are just a few stories of this effort in recent years.