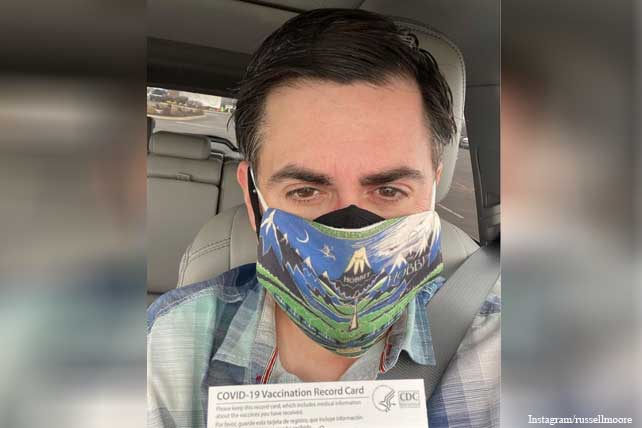 (RNS) — Russell Moore, Southern Baptist ethicist-turned-public theologian, said that knowing people who became seriously ill or died from COVID-19 may be causing some vaccine-hesitant individuals to change their minds.

“One of the things, I think, that is moving the needle a little bit, more than anything else, is the experience of seeing great suffering,” he said Tuesday (Aug. 10) in a Washington Post Live interview.

“Sadly, many people are seeing people that believed themselves to be invulnerable getting sick or dying,” he continued. “And there’s a great deal of concern about that so, that, I think, is having more of a motivating factor than even all of the public service announcements and information that we can give.”

Moore resigned as the president of the Southern Baptist Convention’s Ethics and Religious Liberty Commission in May and has become a minister in residence of a Nashville, Tennessee, church that is not affiliated with the SBC. He is the new director of Christianity Today magazine’s Public Theology Project.

In a discussion with Washington Post senior writer Frances Stead Sellers, Moore said some people in certain sectors of evangelicalism — particularly Pentecostalism — may say, “God will protect me, I don’t need a vaccine” but, he said, it is primarily misinformation that’s driving the hesitancy to access vaccines.

“I hear from pastors often, who are saying, ‘I’m trying to encourage my people to be vaccinated, showing them all the things that we can do together if we are,’” he said. “But there’s a great deal of misinformation that comes through on social media feeds and sometimes cable news networks, and that simply is much more time in the week than an hour or two hours on Sunday.”

A recent survey by Public Religion Research Institute found vaccine hesitancy has fallen among all religious groups. But the trend was less pronounced among white evangelicals, whose acceptance rate increased from 45% to 56% between March and June. That religious group remained the one with the highest percentage of vaccine refusers: 24% (compared to 26% in March).

Related article: Franklin Graham Encourages All Pastors to Inform Their Congregations Where to Get the COVID Vaccine

Moore added that conspiracy theories and uncertainty, rather than pastors, are driving the evangelical hesitancy or refusal to get the vaccine. Pastors, he said, are often encouraging vaccinations and ministering to those who are sick.

“I don’t encounter many people in evangelical life — at least who are churchgoers — who are anti-vaxxers,” Moore said. “But I do encounter a lot who are just wondering, who do I trust and what do I believe? And so sometimes that takes a long time.”

Moore also said he rarely hears someone say “I’m a supporter of QAnon” but the conspiracy theories spread by QAnon and similar groups are reaching people who may not know their source.

According to Moore, a concerning and growing issue is the number of younger evangelicals who are seeking advice on how to educate their parents who have bought into these kinds of theories.

“They’re worried about them and want to know how to connect with them,” Moore said. “That’s almost a mirror image of the conversations I would have been having 10 years ago, when parents would be saying, ‘Help me to know how to talk and connect to my children.’”

Moore was also asked about his decision to leave the Southern Baptist Convention, a move that was followed by the release of leaked correspondence in which he bemoaned racism within the institution and accused some SBC leaders of trying to delay attempts to address sexual abuse allegations.

“I think the decision was more about how best to carry out the calling that I think God has put on my life,” he responded. “In a time when institutions are often not trusted, not just because of the cultural moment but because in many cases those institutions have failed, we can do without some institutions. But we cannot do without the church of Jesus Christ, in my view. So that’s going to require some new ways of connecting and being together.”