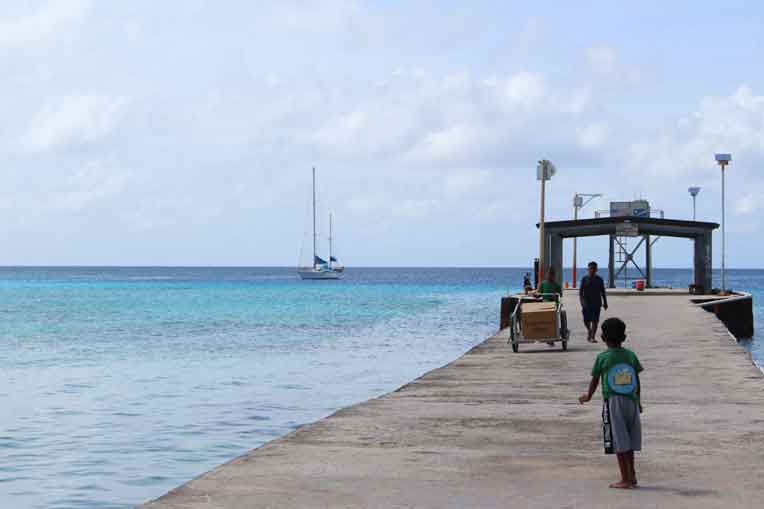 The small island of Enubirr has no electrical power or airport. Located in the central
Pacific between the Philippines and Hawaii, Enubirr is part of the Republic of the
Marshall Islands and home to just over 1,000 people.

In December 2020, Scott and Katie, a husband-wife missionary team to the Marshall Islands, and two others set sail for Enubirr aboard Cloud Nine, a 57-foot sailboat filled with 30 cartons of Operation Christmas Child shoebox gifts. For six-and-a-half hours,
the boat rocked across the sea until the team traversed 40 miles to meet local church representatives for an Operation Christmas Child outreach event.

Though it was 85 degrees and extremely humid, 293 children gathered under a covered
patio and waited patiently while parents huddled around the edges.

The team began with some Marshallese songs and then performed a skit before
presenting the Gospel of Jesus Christ to the eager crowd using colorful posters supplied
by Samaritan’s Purse. Next, the shoebox gifts were handed out, along with The Greatest Gift Gospel booklets.

One boy at the event was Randy, a 12-year-old who loves to play soccer. He
desperately wanted a soccer ball of his own. But the most popular sports throughout the
Marshall Islands are basketball and volleyball. His mother had diligently searched for a
soccer ball to buy for him, but she

was unable to find one. But God knew the desire of Randy’s heart. When he lifted the lid of his shoebox gift, Randy was thrilled to find a soccer ball and pump of his very own!

“One of the local pastors, Antonio, said that this shoebox, for many, is the first gift that
these kids have received that is just theirs,” Scott said. “They don’t have to share—that is a big deal!”

But as delighted as the outreach team was to see the children enjoying their gifts, they
were even more thankful to God for the spiritual fruit that came a short time later. “At the
end of the program,” Katie said, “we did an altar call where 131 kids accepted Christ!”
Samaritan’s Purse has provided the partnering churches on Enubirr with resources to teach The Greatest Journey discipleship course specifically designed for shoebox recipients. The congregations are excited to use and distribute the materials—especially the Bibles that are given to children when they graduate from the 12-lesson course

“Operation Christmas Child is not just a ‘give a gift’ kind of program; it offers the gift of
salvation, which we have seen over and over again impacts a whole community,” Katie
said.

In 2019, Samaritan’s Purse President Franklin Graham launched a Pacific Islands
Initiative to bring shoebox gifts and the Gospel to remote places like Enubirr. So far,
more than 283,000 children on hundreds of islands have received a shoebox packed full
of toys, school supplies, and hygiene items—and the opportunity to hear the Good
News of Jesus Christ!