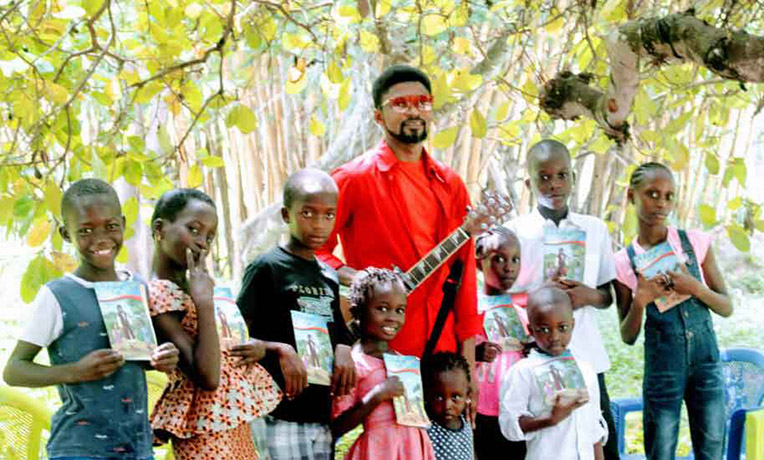 Johnjames, a missionary in Gambia, took his five-year-old son with him as he shared the Gospel in the town of Banjul, singing praise songs to God on his guitar.

They distributed 75 Operation Christmas Child shoebox gifts to children ages 2 to 14. His son named Unique was helping give out the gifts, so he was surprised that there was one for him, too! Then, Johnjames invited the shoebox recipients to participate in the 12-lesson discipleship program called The Greatest Journey. Sadly, none of them returned.

“After about a week, Unique insisted that The Greatest Journey should start with him,” said Johnjames. He was reluctant to begin the class for only his son, but since he hoped others would join soon, he began to teach his son the Bible lessons in faith.

The day after they finished the first lesson about God the Creator, two neighborhood boys named Mendy and Musa saw Unique playing with the soccer ball that he had received as part of his shoebox gift. Unique told them about Operation Christmas Child and The Greatest Journey, inviting them to study God’s Word with him. Excited, he asked his father if they could get shoebox gifts, too.

The additional shoeboxes enabled Johnjames to reach a whole new group of children, including the two boys who soon joined The Greatest Journey class alongside Unique.

During the next lesson, Mendy told them that his younger sisters wanted to join them, increasing the class to six. Musa also brought three of his friends. The class continued to grow as the boys and girls told friends about Jesus, resulting in Johnjames teaching two different groups three days a week.

“Seven children received Christ as Lord,” said Johnjames. “The parents were joyful for what their children learned through The Greatest Journey, and for the positive behavioral changes they witnessed. From just one child, we had 21 kids attending the class consistently until graduation.”

During one of their morning devotional times, Unique asked his father, “Are there only 12 stories in the Bible?” Johnjames promptly told him no. “Let’s call everyone back then, so you can teach us all the stories,” Unique said.

Not long afterward, Mendy’s mother also suggested that he continue teaching the children. Now, Johnjames hosts a Bible club named in honor of his son that meets two hours on Saturdays.

“The aim of The Unique Bible Club is to help the kids increase their knowledge of the Word and to stir up a passion to love, know, and serve God wholeheartedly,” Johnjames said.

The class studies The Greatest Journey lessons in greater depth. They memorize Scriptures, pray, sing and act out Bible stories. The classes also have helped the children learn to read and write.

“Thank you, Operation Christmas Child, for the great opportunity to reach out to kids,” Johnjames said. “My involvement with the Samaritan’s Purse project has really encouraged my ministry in Gambia. It enables me to reach out to children and their families and share the Gospel.”