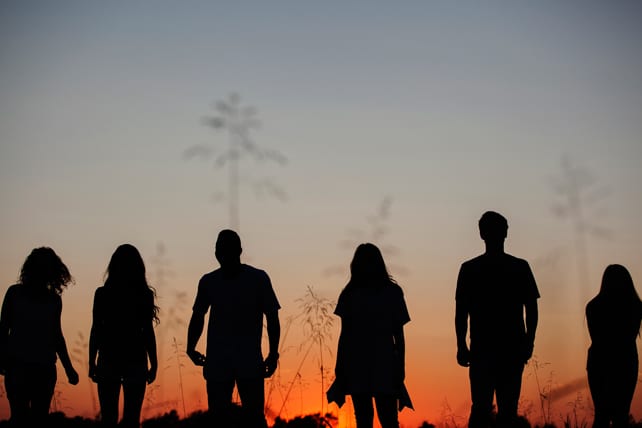 I recently overheard two women discussing their delusional fantasy boyfriends over coffee. They were chatting about their favorite “celebs,” analyzing their hotness, what they love about them, why they would make amazing boyfriends, and how wonderful it would be to meet them face-to-face, or—better yet—to date them.

Another time, I listened to reporters on the news praise a pubescent teenager for asking his Sports Illustrated supermodel crush to come with him to prom. How brave and courageous of him, they said. What an honorable thing to do in stepping out of his comfort zone and taking risks to engage his fantasies, they praised.

There is something safe about keeping people at a distance, obsessing over them from behind the sturdy walls of fantasy. There is something appealing about the unknown that makes it attractive, something about the mysterious that is seductive. Whether it’s the supermodel on the cover of a magazine or that guy at work that you’ve never actually talked to, keeping people at a distance makes us desire them even more.

Keeping people at a distance is never messy. Loving from far away is never hard. It isn’t mixed with the reality of pain, vulnerability, and selflessness; nor does it know the sacrifices of forgiveness and grace. But to really love, as C.S. Lewis says, is to be vulnerable: “There is no safe investment. To love at all is to be vulnerable. Love anything, and your heart will certainly be wrung and possibly be broken.” Real relationships with real people will always come with an element of mess.

This isn’t just about crushing on Hollywood celebs, because delusional fantasy can permeate many other parts of our life. Fantasy is living in what is not, rather than living in the reality of what actually is. In pornography, affairs, and toxic relationships, you will find men and women imprisoned within the confines of a dream. The married man glances at the beautiful office secretary, mentally engaging in a relationship with her, all the while forgetting her flaws and neglecting her deficits. The single woman analyzes and obsesses over a man she has hardly talked to, imagining what life could be if and when, only to have her heart broken by his lack of interest. The housewife is trapped in the delusional fantasy and excitement of her romance novels, leaving her own reality behind instead of dealing with it. The young woman is stuck in an abusive marriage, making excuses and living for the dream of who he could be rather than acknowledging who he actually is and taking steps toward safety. The lonely young man spends hours every evening trapped by the pornographic images on his computer screen, growing numb to the beauty of real women and of real life. They are stuck in a life they make up with people who don’t really exist. They have succumbed to a life fueled by fantasy rather than being grounded in reality. When fantasy becomes our reality, we may find we’ve fallen in love with a dream, fallen in love with an idea, but ultimately, fallen in love with a lie.

One of the keys to protecting ourselves from unhealthy emotional connections is to protect our minds by learning to live in reality. While there may be something provocative about living in a dream, there is something even more paralyzing about it.

When we live in a dream, we lose sight of what’s real. We exchange our realities for something that can never actually exist. We live for what could be and end up missing what is. And in the end, we are led into disappointment, disillusionment, and destruction. We set ourselves up for failure by seeking to find a thing that doesn’t actually exist, setting expectations that cannot be met by ourselves, much less anyone else.

When we live in a dream, we stop really living.

Though they might not be as easy as Hollywood romance, real life and real relationships are well worth the investment. With the help of God’s grace and our deliberate decisions, our real-life relationships can flourish into far greater than a simple dream because they can become our glorious reality.

If your reality is not what you had hoped it would be, it is time to make a change. Challenge yourself to learn and to grow, to forgive and mature, to heal and confess. Deal with things in your past, face the things in your present, and become the person you want to be. Don’t live a passive life, but instead create a reality that you can be proud of by learning to build emotional ties with healthy people in healthy ways. The web of emotional connection is in your control.

Choose to connect with people who bring life, and protect yourself from all the others. And watch as your reality becomes even richer than your delusional fantasy.

This article is an excerpt from Debra’s new book, Love In Every Season: Understanding the Four Stages of Every Healthy Relationship, and is used with permission.

ORDER LOVE IN EVERY SEASON TODAY