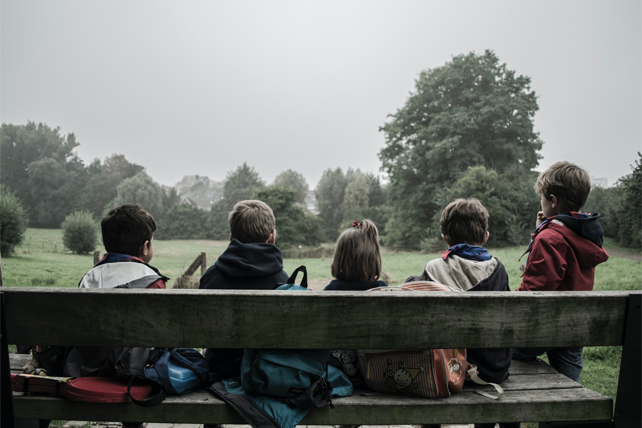 When I was preparing to become a pastor, I was offered an internship at a local church. The pastor in charge asked me what area of ministry interested me most. I told him I would do pretty much anything—teaching, adult discipleship, student ministry, missional living, worship and liturgy, or polishing the pastor’s shoes and being his errand-boy—whatever the church needed me to do would be fine. There was just one group that I told the pastor I wasn’t interested in working with – little children.

Looking back, part of me thinks that the pastor should have, on the basis of my response, rescind the offer to give me an internship. Instead, he did me a favor.

Two days later, the pastor met with me to go over the terms of my internship. The first words out of his mouth were, “Scott, we have decided to assign you to the children’s ministry.”

I left the meeting feeling disrespected and not listened to. And yet, over the next couple of years serving in this internship, I realized that it was I, not the pastor, who had been disrespectful and had not been listening.

Now they were bringing even infants to [Jesus] that he might touch them. And when the disciples saw it, they rebuked them. But Jesus called them to him, saying, “Let the children come to me, and do not hinder them, for to such belongs the kingdom of God.” (Luke 18:15-16)

CS Lewis once said, “I do not enjoy the society of small children. I recognize this as a defect in myself.”

Because little children, just like the poor, offer us the best shot at understanding what it means to live inside God’s kingdom.

One time Patti and I were both flattened by the flu. It was one of those illnesses that made it very difficult to get out of bed to do anything, and both of us had it…for an entire week. On day three, one of our daughters entered our bedroom, woke Patti up, and boldly declared that her parents having the flu was unfair and it was getting really hard for her. Then, she proceeded to invite Patti – her completely fatigued and flattened-out, flu-sacked mother – to rub her feet.

This—the bold and unfiltered honesty, the utter lack of situational awareness—it is both irritating and refreshing, yes?

By being the same in every environment, little children invite us, too, to remove our masks and live authentically. Children, like no one else, invite us to cry out and ask for comfort. They remind us that we, just like them, are safe to be ourselves instead of putting on masks and trying to become a fake imitation of somebody else. We are safe because, just like them, we live every moment of our lives in the presence of and beneath the gaze of a Parent whose love, approval and favor can be assumed at all times. This Parent never grows weary, and he never slumbers or sleeps. Our Father in heaven – who loves us as we are, loves us where we are, and also, like the best parents, refuses to allow us to stay as there – this Father is there with the ever-faithful and healing reminder that we are at all times HIS beloved.

Though my father and my mother have forsaken me, but the LORD will take me in…Can a woman forget her nursing child, that she should have no compassion on the son of her womb? Even these may forget, yet I will not forget you. Behold, I have engraved you on the palms of my hands. (Psalm 27:10; Isaiah 49:15-16)

How long, O LORD? Will you forget me forever?…But I have trusted in your steadfast love; my heart shall rejoice in your salvation. I will sing to the LORD, because he has dealt bountifully with me. (Psalm 13:1, 5-6)

Calling Out the Best in Us

Children also provide us with a necessary gut check. In simply being who they are, they challenge the distorted value systems that neuter our own progress in the virtues that matter most—the virtues associated with love. The costs and inconveniences associated with loving messy children are not costs and inconveniences. Rather, they are God-given reminders of life as it’s meant to be.

Don’t hinder the little children. Let them come to me.

Jesus’ invitation to escort children into his embrace is also an invitation—no, it’s a command – to receive the children unto ours as well.

Our friends Mike and Allie (names changed for their daughters’ sake) did something amazing just a few years ago when their opportunity to adopt a little girl from Uganda was put at risk. After they had met the little girl and the adoption process was underway, Mike and Allie discovered that, based on Ugandan law, their unique situation would require them to live in Uganda for two years before the adoption could be completed. This would mean relocating with their three children to the other side of the world. It would also mean turning down Mike’s dream job that had just been offered to him—a job serving as headmaster to one of Nashville’s thriving K-12 schools.

As Mike and Allie wrestled with the potential implications, they began to ask, “What if one of our biological children were stuck in Uganda, and the only way to get the child back was to move to Uganda for two years?” They concluded that they would do whatever it took. They would move to Uganda for two years or twenty if necessary, if that was what it took to bring their child back home. So Mike and Allie decided that if the Ugandan courts wouldn’t grant them an exception (which then ended up doing after all, but that’s beside the point)…they would pack up, leave home and family and friends and career behind, and move to Uganda for the little girl who, just like the other three, in their minds was already theirs.

Exposing the Need in Us

Truly I say to you, whoever does not receive the kingdom of God like a child shall not enter it. (Luke 18:17)

One of the greatest privileges I have is being pastor to a church that treasures its many young people who also have special needs.

I think of Katie, who has Down syndrome. She has the biggest smile and gives the longest and strongest hugs. I think of how she lights up when I tell her she is beautiful and how she sweetly reminds me that I need to tell her she is beautiful on those rare occasions when I forget. I think of how she hands me pictures that she has drawn—pictures that represent her profoundly simple yet simply profound interpretations of my sermons.

I also think of William, who has Down syndrome and autism. William’s parents are stretched fully with this beautiful and animated young man, working together as they live life alongside him. And yet they never stop telling us the ways that God reveals himself to them through William. Amid days that can feel like a nonstop, full-court press, William will surprise them in wonderful ways. Not long ago, William got ahold of his father’s cell phone and began texting random people on his father’s contact list. Each text William sent contained two simple words, and nothing more: Love you.

For the remainder of the evening and into the next day, his father received responses to the “Love you” text from family, friends, professional colleagues, and also a handful of mild acquaintances. Some responses were affectionate and, as you might imagine, others quite humorous. Each of these exchanges was triggered by a spontaneous, non-discriminating love note, delivered via the thumbs of a young man with an endearingly unique sense of humor. William is also a hard worker, with a steady job. He is a member of our church, and an all star in our community.

As the hymn says, “Sometimes a light surprises…” and these lovely lights have been God’s instruments of surprise time and time again.

We all need little children just like Jesus’ disciples did. We all need Katie and William. We need these masterpieces because they help us see God, and also ourselves, with greater clarity and awe.

“Let the children come to me,” Jesus said. “And do not hinder them. For to such belongs the kingdom of heaven.”