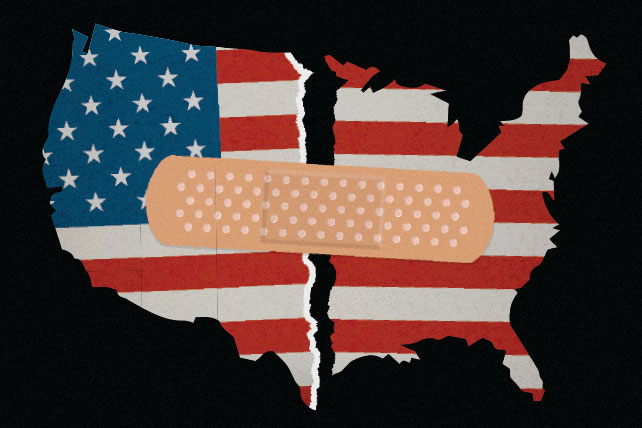 Following the 2020 election and the subsequent attack on the U.S. Capitol last week it is clear that the church in America is more divided than it’s been since the Civil War. Christians seem to be on every side of every issue, pointing fingers and calling names. Where I see the most destruction is within churches and families. Pastors are being attacked from all sides for everything they say or do not say, and this morning I heard about several families who are not speaking to each other because of the political divide that has grown into a gaping chasm over the past several months. The impending end of the Trump presidency will not heal the pain, suspicion and acrimony of the past few months. I believe there is only one path to reconciliation and restoration, and it does not involve politicians, elections or courts.

The “what about…” argument is simply an outgrowth of the common elementary school retort “He started it”. It is a refusal to take responsibility for my part in the problem, and that is a dead end street. The first thing I learned about counseling in college is that in every relationship breakdown each side has a part to play. The second thing I learned is that no healing can take place until each party owns their own stuff. Focusing on “What about all the bad stuff your side does” never leads to healing, reconciliation and health. It will exasperates the problem.

Another unproductive path is the “I told you so” stream of thought. Several prominent Christian thinkers and writers have shared versions of the idea that if we’d only listened to their warnings over the past few months and years we wouldn’t be in the mess we are in today. I am not entirely sure why they think the people who haven’t listened to them up until this point are going to listen to them now, no matter how eloquent or persuasive their words. Remember how effective your parent’s admissions of “I told you this would happen” were when you were a child? It turns out it’s no more effective now that we are adults.

A third wrong turn is the “let bygones be bygones” path. Some are saying that we should just hug and make up. Surely we can put our differences aside and just move forward. Actually, we can’t. The wounds we’ve inflicted on each other are too deep and too hurtful to think we can just put on a bandage and pretend everything is ok. The true path to healing involves understanding the pain we’ve caused and experienced on both sides of issues. We have to address the underlying issues of how to love each other and live in true community.

That brings me to what I believe is the only path toward becoming a healthy, vibrant church. It is the path God prescribed to Solomon at the dedication of the Temple recorded in 2 Chronicles 7:14: ‘Then if my people who are called by my name will humble themselves and pray and seek my face and turn from their wicked ways, I will hear from heaven and will forgive their sins and restore their land. ‘ 2 Chronicles 7:14 (NLT)

The path begins with humbling myself and owning my part of the divisions in the church. How have I contributed, either by my action or inaction, to the hurt and confusion? Are there things I’ve said, posts I’ve shared or comments I’ve made that have been hurtful rather helpful? This isn’t about who is right or wrong, this is about how I’ve made things worse. Healing begins by humbly confessing my sin to those I’ve hurt.

This morning I read a beautiful article by a preacher who confessed that what he’d said was wrong and how sorry he was for misleading his followers. That is a great first step. Healing will not come from continuing to point out the sins of others, proving where I’ve been right, or trying to just move on. Healing begins when I confess my part in the mess we are in.

I’ll start with me. I have remained on the sidelines. I have not spoken up when I’ve seen people attacking others. I have not had one-on-one conversations with people when I disagree with the message or their method. I have not offered wisdom or insight, choosing instead to hide behind the mantra, “I don’t want to get into politics.” The truth is I didn’t want to deal with the fallout of speaking up. I’m not talking about speaking up about how wrong the “other side” is. I’m talking about speaking up for love, joy, peace, patience, kindness, goodness, gentleness and self-control. And that’s just the beginning of my sin. I’m asking God to search me and point all the ways I have made things worse. I’ll let you know as I turn up more evidence.