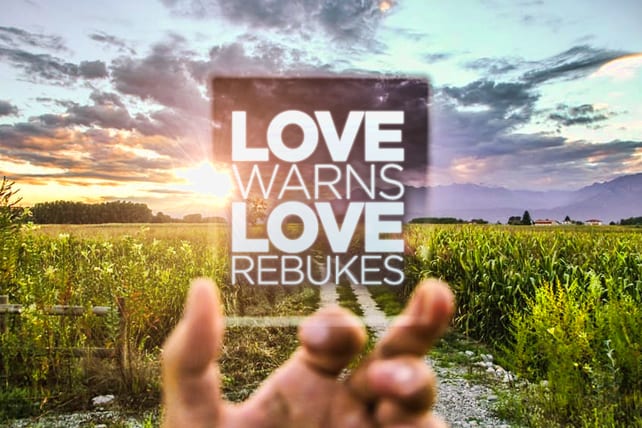 I really wasn’t very thankful and I should have been.  My mom was very consistent and persistent in doing two things with me again and again; warning and rebuke. Again and again, as I was getting ready to leave the house as a teenager, mom would warn me about the dangers and temptations of life in a fallen world. I didn’t really appreciate her moral mini-lectures. I would stand there impatiently or remind her that she had said the same thing to me many times. I saw these times as an imposition, a hassle that stood between me and the planned activity of the evening.

She was also very committed to rebuke. The word itself doesn’t sound very kind. But it is. Rebuke is meant to help you see yourself with accuracy. When I had failed or been disobedient, mom was very faithful in getting me to consider why I had done what I had done and what I could have done instead. I those moments I often saw her as picky and judgmental. I would argue with her; activating my inner lawyer and rising to my defense. I often refused to look at myself with accurate eyes.

I look back on those moments now and understand what mom was doing. She was loving me. It was love the motivated those many warnings and love that propelled her to want me to learn from my errors. If she had stood by before and after and been silent, it would have been sure evidence that she did not have a heart of affection for me. There are many instances of divine warning in the Bible and as many instances of divine rebuke, all motivated by faithful, gracious, redemptive affection. I want to look at one of the most startling with you for a moment.

Mark 9:14-29 records Jesus coming down from the mountain of his transfiguration. There before Peter, James and John his humanity is peeled back and his divinity is revealed in stunning glory. His roll in God’s plan of redemption is also revealed as he stands with Moses and Elijah as the ultimate fulfillment of all of the visions of the prophets and of every requirement of the law. Immediately as Jesus comes down from this moment of high holiness, he is greeted with shocking, distorting, destructive evil. A father has sought the help of Jesus for his son who is under the control of an unclean spirit which is doing everything it can to destroy the boy.

I am deeply persuaded that these graphic descriptions of someone who is under the control of evil are meant to sit in the Bible as concrete and specific warnings to us of the life-distorting, destructive evil of evil. You see, here is our problem; we don’t always see evil as evil. There are times when evil looks downright attractive and beautiful to us. A man lusting at the mall doesn’t see dangerous, destructive evil. No, he sees beauty. Someone gossiping on the phone doesn’t experience the danger of evil, but rather the excitement of being in possession of secret knowledge. The child who has taken the cookie he was instructed not to eat doesn’t feel the danger, but is taken up with the flavor of his purloined treat.

So, we need to see the destructive evil of evil again and again. We need to understand that evil is never good. It never produces life. It never leads you toward what is good, right and true. It is always dangerous. It is always destructive. It always leads to death. Because of the ability of what is very bad to present itself as very good, we need to be warned again and again.

At the bottom of the mountain Jesus walks into an argument and when he asks what the argument is about, the father of the boy with the unclean spirit says, “I asked your disciples to cast out this spirit and they were not able.” Later in the passage Jesus tells us why; the disciples actually tried to deliver this poor little boy without praying. Let it sink in. They didn’t pray! You read it right, they didn’t pray! They tried to defeat the powerfully destructive evil that had taken over this boy in their own strength. Did they really think they the had that kind of independent power over evil? It’s shocking!

Jesus’ rebuke is brief, but stinging. He is essentially saying, “When will you realize that you have no independent, self-sufficient ability to defeat evil on your own; none whatsoever? This is exactly why you need the powerful grace and glory that was revealed on the mountain just a few hours ago.”

Now, don’t be too quick to condemn the disciples. I think there is a whole lot of prayerless Christianity in the church of Jesus Christ. I think we often try to defeat, in our own strength, things that we have no capacity whatsoever to defeat. We attempt to do, in our own power, things that we have no ability to do without empowering grace. A husband and wife will attempt a difficult conversation without prayer. A dad will attempt to have a constructive talk with his rebellious teenage son, but it never hits him that he should pray first. A student tries to matriculate his way through a secular university without prayer. When we face temptation we try to muster up the strength we need not to give in, instead of running in weakness to our gracious and powerful Savior.

You see, if you had the ability to defeat evil on your own, Jesus would wouldn’t have had to come to live and die for your sake. So, prayer remembers the lesson of his coming and calls you to abandon your reliance on you and rest in the power of the One who invaded your weakness with his grace. And it is important to remember that the evil which most often troubles and defeats you is not the evil outside of you, but the evil inside of you. If the evil inside is your biggest problem, then you need to pray for rescue again and again and again because you have no ability at all to escape you! The rebuke for prayerless self-reliance is one each of us needs again and again.

So, because we don’t always see evil as evil and because we try to defeat it again and again in our own strength, your Lord will come to you again and again with warning and rebuke. His gracious warning and rebuke are for your protection and your rescue. Anytime your Lord opens your eyes to see evil for what it is, and anytime he exposes your self-sufficiency for what it is, he is wrapping arms of faithful redemptive love around you. Love warns, love rebukes. Each expresses the fatherly grace of your faithful and persistent Savior.