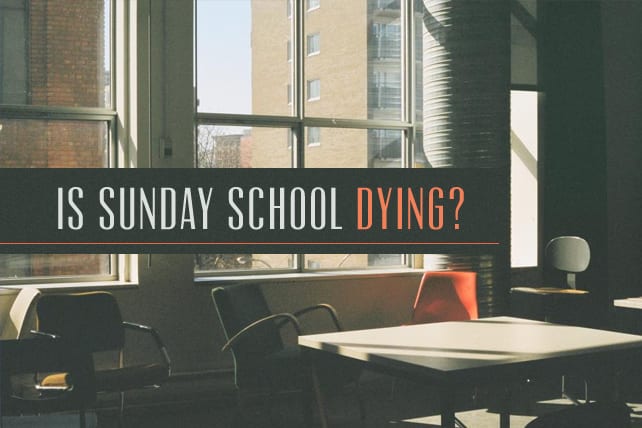 Sunday School. Some churches still use this term for their Bible study hour at church. But a large percentage of church leaders would say the term is an ancient relic that has been lost in the progressions of change.

Is Sunday School an ancient term? Well, it is over 230 years old. It originated in Britain in the 1780s. During this time of the Industrial Revolution, many children spent six days a week working in factories, which resulted in them being illiterate. Christian leaders of the day wanted to do something to change that. Sunday was the only available time for these children to gain some education. Robert Raikes, an English Anglican evangelical, was a key leader in starting the Sunday School movement. The first “Sunday Schools” were literally schools. They were places where poor children could learn to read.

Soon Sunday School spread to America. Churches everywhere began to create Sunday Schools and the movement became so popular that by the mid 19th century, Sunday School attendance was part of most children’s lives. Even parents who did not regularly attend church themselves sent their children to Sunday School. Although Sunday School started as a way to educate illiterate children, religious education was, of course, always an important part of it. The Bible was the textbook used for learning to read. Children also learned to write by writing out Bible passages.

As child labor laws grew and children started going to school during the week, Sunday School shifted toward being totally about religious education. Sunday School also became an evangelistic tool for reaching children with the Gospel.

Many churches have replaced the description with names like “Life Groups” or “Bible Fellowship” or “Connection Groups” or “Small Groups.” I don’t think it is a negative think that the term “Sunday School” is being used less. The word “school” is not appealing to most kids and the last place they want to go on a Sunday is where they have been all week.

The important thing is not that the name “Sunday School” is dying. The important thing is that kids and parents are taught the Word of God, are part of a smaller group of believers where they are known and cared for and have the opportunity to engage in discussion about God’s Word. These are key components that you just can’t get in a large group only format. Whatever you call it, we must provide an opportunity for kids to be part of these elements that are a vital part of discipleship. Discipleship happens through relationships and that doesn’t happen staring at the back of the person sitting in the pew in front of you.

Your turn. Do you still use the term “Sunday School?” If not, what do you call your discipleship opportunities for kids and families?