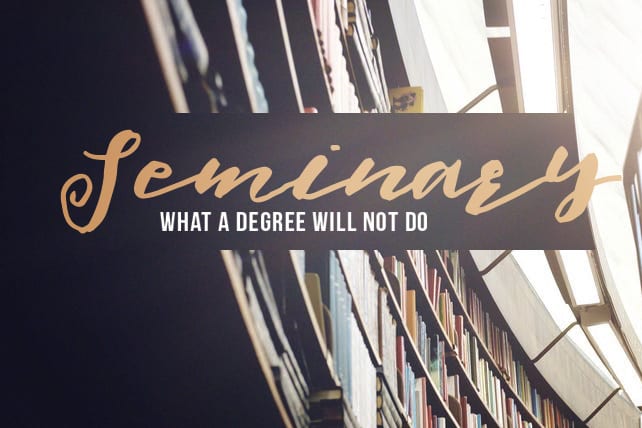 Consider this a love note to some unemployed preachers.

Not all, mind you (I’m trying to stave off a ton of irate letters). Just some.

“I have all this education and training. Why won’t churches call me as pastor?”

He was angry at God, at all churches and at the system. He sported a college degree and two diplomas from seminary, the last entitling him to call himself “Doctor.”

And yet he was unemployed.

His resume shows two years each at several churches. Not a good record.

“The old churches are blackballing me,” he said. “I’m thinking of suing them.”

At one point he said, “I’m giving up on the organized church.”

Now, a casual observer may think I’m betraying a confidence here. I might be, except for one overriding thing: I’ve heard this same complaint, in one form or other, at least a half-dozen times over the years.

There’s a lot of this going around.

This complaint is based on a few false assumptions…

–that a seminary degree proves you know something.

I have known men with advanced degrees who are functionally illiterate, who never read a book or have a creative thought, and whose sermons are a repetition of every stale cliche’ in the book.  Read their writings and you come away shaking your head, that an educated person would not know that subjects and verbs must agree, that spelling is not only a good idea but imperative.

Having a seminary degree, even several of them, to our everlasting shame, does not prove you are educated.

–that a seminary degree entitles you to a job.

No one owes you a job, least of all the church of the Lord Jesus Christ. So, unemployed preacher, turn your anger in some other direction. Better yet, get over it. Get out there and find a job, even if it’s flipping burgers. If nothing else opens up, you can preach on the streets, ask the nursing home for permission to hold services there, or visit the jails. Someone out there will listen to you. But that degree does not obligate anyone to pay you a salary.

–that a seminary degree puts you ahead of others in the job market.

Sorry, Charlie. That degree does not prove you are smarter than the guy without one, more capable than the fellow with the high school education laboring away at his bi-vocational calling, or even that you are qualified for anything.

There was a time, perhaps a generation ago, when doctorates suddenly became more plentiful, that search committees were impressed by degrees and thought “Doctor” before a name would guarantee quality, effectiveness, dedication. But those days are over, ruined forever by shoddy preaching done by shallow preachers certified by sick seminaries.

And that’s not all bad. No search committee should call a minister because of his degrees or bypass one due to the lack of them.

–that a seminary degree proves your dedication, your spirituality, your competence.

It doesn’t. Seminary diplomas should carry fine print at the bottom saying something like: No guarantee is made by said seminary that the possessor has attained spiritual maturity, knows his Bible or lives by faith. Anyone hiring this candidate assumes full responsibility for checking into the background, doctrine and capabilities of same.

So, what good is a seminary education then, if it doesn’t prove your qualifications or guarantee you a job?

A few years spent on the campus of a good sound theological seminary when done properly—by which we mean the student studies conscientiously, does classroom preparation faithfully, fulfills the expectations of the professor, etc.—will do a great many things…

–It will enlarge the mind and heart of the student.

–It will inform him/her of the world of biblical history, language, culture, content and such.

–It will connect the student with professors, the denomination, various agencies, ministers far and wide, and colleagues (i.e., students), all of which will be invaluable to a lifetime of service to the Lord through His church.

–It will teach the student some skills. In seminary, I learned the Hebrew and Greek languages, took a series of classes covering both the Old and New Testaments, took some intensives on certain books of the Bible, and took classes on Christian ethics and social considerations. The classes on church history—I must have taken a dozen of these—opened my eyes to the heroes and heresies of the past, something everyone who would open God’s word to preach should know. I loved the classes on biblical archaeology and have read a dozen books on that subject over the years.

Seminary did me a world of good. It gave me a huge group of friends, many of whom are still in harness and still getting it done, after more than 50 years. I treasure the friendships made in classrooms, in the hallways before and after class, and on campus as we got to know each other in our homes.

And, it will do one huge thing more: A seminary education, while it will not prepare the student for everything that arises in his future ministry, will give him/her the tools for dealing with whatever challenges arise in the future. He will know how to look up a word, how to study the history of some movement, and where to find some essential information.

I do love New Orleans Baptist Theological Seminary. They get a check from me every year, and I pray for President Chuck Kelley, his amazing wife, Dr. Rhonda Kelley, and a ton of faculty and administrators there. Some of them have been close friends of mine for a half century. A couple of them I taught in Sunday School when they were in college.

Go to seminary. Work at it. Get the degrees. But don’t expect it to be the lord of your life afterward. Of the Lord alone was it said, “He is my Shepherd; I shall not want.” Don’t expect your diplomas to get you into anything. They’ll not even get you a discount at McDonald’s. What they will do is give you a leg up on doing the ministry God called you to do.