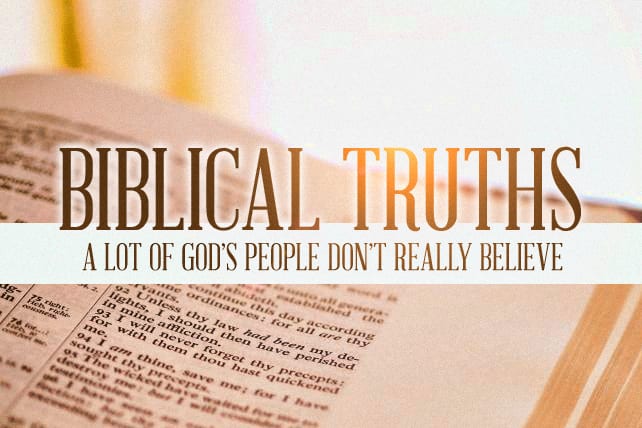 From the beginning, the Lord’s people talk a better game than we live.

So many biblical truths look good on paper and sound great when we’re spouting them. And yet, judging by the way we live, the Lord’s people probably do not believe the following…

One. God sends the pastor to the church.

Churches survey their congregation to find the kind of pastor everyone wants in the next guy. People lobby for a candidate they like and rally against one they don’t. And they vote on the recommendation of their committee. And after he arrives, when some turn against him, they send him on his way.

Do we really believe God sends pastors to churches? They are God’s undershepherds (see I Peter 5:1-4) and appointed by the Holy Spirit as overseers of the church (Acts 20:28).

In the typical congregation, what percentage of the people are serious about their prayer life?

If we believed that God hears, cares, and answers, we would be praying over every detail of our lives. “Pray without ceasing” (I Thessalonians 5:17) would define our very existence.

Three. It is more blessed to give than to receive.

God wants His people to be givers, generous in every area of life. As a member of the church, He wants us to be sacrificial givers (see I Corinthians 8:1ff).

Think how hard it is to get God’s people to turn loose of the almighty dollar. I know pastors who no longer preach on giving because they cannot take the criticism (Acts 20:35, Luke 6:38, and Matthew 6:19-20).

Four. We will stand before the Lord and give account of all we have done.

If we believed that, imagine how differently we would live. A lot of church leaders would deal with their pastors a lot more carefully than they do now. The tyrants who rule their churches clearly do not know, believe or care that they will be brought into judgement for their actions (see Matthew 12:36, Romans 14:12 and I Peter 4:5.)

Five. God’s people are to obey their leaders.

The very idea, I can hear some saying. Even if they know Hebrews 13:17, they conveniently ignore it. They do so to their own detriment.

The fact is our members obey their leaders so long as they agree with them. But let the leader ask of them something they don’t want to do, and they bail out.

Six. Pastors will give account to the Lord for their members.

That’s Hebrews 13:17 also. If pastors genuinely believed they would be called to account for every member, they would do a lot of things differently. They would work at knowing each person, would be monitoring the spiritual development of each member, and planning ways to grow disciples and put them to work. They would develop accountability methodologies, mentoring programs and such. And I guarantee you, most would be hoping for smaller congregations.

Seven. Whoever would be great, let him be the servant.

Jesus said a ton of things about service, including, “I am among you as One who serves.” He said the path to greatness is through service. And He said it’s the way of the unsaved world to want to dominate people and lord it over them. And yet, only a tiny fraction of His people believe that. We still want to be elected to leadership positions without having to do the hard work of serving. And when we do elect people to serve—we call them deacons—in most cases, they quickly grow bored serving and want to rule and start giving the pastors headaches (see Luke 22:24ff).

Eight. Turn the other cheek. Go the second mile. And unrealistic stuff like that.

Jesus didn’t hesitate to lay down rules that (ahem) real-world people scoff at. Such as turning the other cheek when someone hits you, giving them your shirt when they steal your coat, loving your enemies. That’s all found in Luke 6:27ff and several other places.

That’s for the super spiritual, the typical church member insists. And since I could never be super spiritual, I’m going to retaliate when someone does me wrong. In so doing, our role model becomes more Clint Eastwood (“Go ahead; make my day!”) than the Man of Galilee (“Father, forgive them; they know not what they do”).

Nine. Rather than taking one another to court, God’s people should endure wrong.

It says it right there in I Corinthians 6:7. “But I have my rights,” insists the church member. Clearly, the honor of Christ and the glory of God matter far less than getting even with someone who has done us wrong.

Ten. Worship is about God, about bringing ourselves and our offerings to Him, and not about us.

The deacon prays before the sermon, “Lord, help us get something out of this service today.” After church, people heading to the parking lot remark on whether they “got anything out of that.” One church member was heard to say, “A 20 minute sermon? For that, I got dressed up and drove 15 miles?”

Our people seem not to have a clue that worship is about the Lord and not them. They actually do believe that it’s to meet their needs, to give them warm feelings inside, and to prepare them for the week ahead. Yet, there is not a single word in Scripture to indicate this.

Want a text? Try the entire 150 Psalms for starters. But start with Psalm 96:8, “Ascribe to the Lord the glory of His name; bring an offering and come into His court.”

We have so far to go to become Christlike, spiritual, scriptural and mature.

The person Christ is making us into is light years beyond the carnal, immature, self-centered persons we are at this moment.

The first step toward becoming what God wants us to be is acknowledging how far short we fall. I fear we are more like the Pharisee of Luke 18:9-14 whose prayer was thanking the Lord for all the achievements he had accomplished, when we should pray like the publican who said, “God, be merciful to me the sinner.”

Start there. Lord, your ways are not mine, and I say that to my shame. As the heavens are higher than the earth, your ways are beyond mine (Isaiah 55).