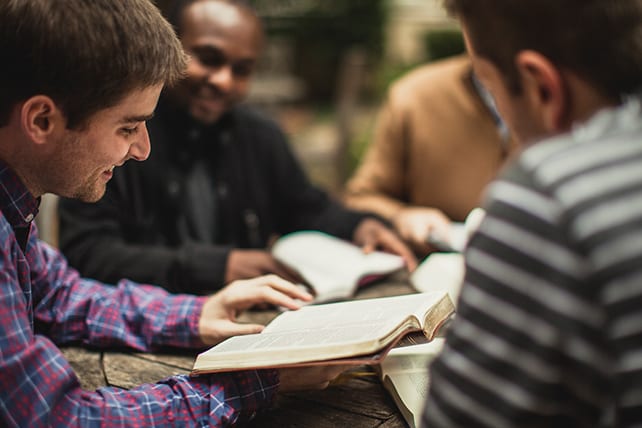 Hardly any pastors are totally satisfied with what’s happening when it comes to their men’s ministry. It seems the women’s ministry runs circles around the men. It’s not necessarily a budget thing either. It’s just this sense that there could be more. More participation, more depth, more passion, more commitment is possible.

The Importance of Men’s Ministry

Before we jump into the how, let’s talk about the why. Churches need leaders…strong leaders. Male and female. But especially male because when a man goes all-in for Jesus, his influence reverberates through to his wife, his kids, his workplace, his community, and his church. He becomes a disciple-maker if only through the sermon of his life. He’ll become a more generous giver, both of his time and his treasure. He’ll draw other men to Jesus. Over time, his friends will be attracted to what he has and how he lives. Men in the church will respect and follow him.

HELP FOR THE PASTOR

As a pastor, about the only thing you can do all by yourself is prepare and preach sermons. You can visit the sick, do funerals and weddings, but the work of the church requires the effort of others. The first place you turn for help is your staff, but that resource gets exhausted pretty quickly. Depending on the size and budget of the church, you may have a few or a few hundred. One of the three largest churches in America has 400 staff people. You think, “Shoot, I could move mountains with that many people.” But imagine trying to minister to 50,000 people with 400 staffers. No way. At some point, you have to depend on lay people…on volunteers…on men who are willing and able to roll up their sleeves and help. That large church has almost 5,000 volunteers who are the ‘hands and feet’ of Christ to its attendees. The larger the circle of committed volunteers you can count on, the more you can do to lead people to Christ and minister to them.

Which brings us back to the criticality of a vibrant men’s ministry.

Here’s what we know. Men’s ministries tend to be event driven. There’s usually one guy who spearheads everything. He pulls together an ad hoc team to make events happen. Outsiders are always welcome but rarely come. There’s always fellowship, food and some sort of speaker or program. When it’s over, the room is cleaned up and everyone goes their way until the next event. In some churches, there are men’s Bible studies and ongoing programs like Men’s Fraternity, Man in the Mirror or CLC. But those tend to draw only the most faithful. They’re more curriculum-based than relational and the commitment level in terms of study time is significant. So, most men’s ministries are bifurcated…events for the masses, intensive Bible study and training for the few, and no system for consistently producing the leaders your church needs.

We believe the best way to start (or restart) a men’s ministry is through small group mentoring. Why? Because that’s how Jesus did it. The Scriptures give us a good picture of how Jesus started His men’s ministry…

Since every one of Jesus’ guys had been taught the Law from birth, this was not about information transfer. It wasn’t about content, it was about application. Jesus modeled a small group process that led to total commitment on the part of the guys and from that group, the church began.

About 15 years ago, I began mentoring in what I now know to be a modern-day version of Jesus’ model…a system that can be used to launch a vibrant men’s ministry. It begins with you…the Senior Pastor. It begins with your commitment to seeing the men of your church go all-in for Jesus. You don’t have to do it personally, although we know pastors who’ll tell you that making disciples using this system brought huge new energy to them personally. But you must be committed to the process, leveraging your leadership position and personal influence to help get it launched.

Here’s the vision. Lay leaders of your church, each sitting at the end of their dining room table, pouring out their cups into the lives of six to eight younger men at a time for nine months to a year. Helping them find and follow Jesus…making disciple-makers a few at a time.

When Brian Moore, the Lead Pastor at Crosspointe Church in Anaheim, California, tells his story, one can see and hear the impact of following Jesus’ model for re-launching ministries. Brian took over a church in disarray. Two previous pastors under indictment for misusing church funds. Membership dropping below 100. Budget woes like you wouldn’t believe. Desperate for leaders, Brian heard about the Radical Mentoring model and decided to give it a shot. He handpicked four lay leaders and four staff folks (all he had!) and began this process. At the end of a year, four of the eight were ready to lead another generation of potential leaders. At the end of that next year, he had about 20 leaders ready to go. Now approaching 1,000 members and attenders, Brian is now surrounded by motivated, all-in lay leaders. Forty people have now led groups of their own and 140 leaders have been developed through the process over four years.

Here’s a fly-by of the system we’ve distilled from Jesus’ model. It’s adapted to 21st-century culture, using tools that didn’t exist 2,000 years ago.

It begins with one leader. One spiritually, emotionally and relationally mature man, handpicked by you. It can be a staff person or even yourself, but it has to be someone the men of your church look up to and respect. He has to be an on-purpose guy who loves Jesus and takes seriously the God-centric life. He is signing up to spend three hours with a group of six to eight guys in his home once a month.