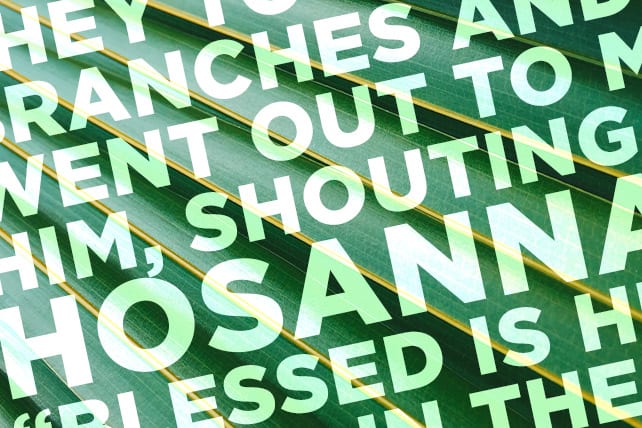 Palm Sunday is quickly approaching and with it, the Palm Sunday service. We often view this time as Jesus’s triumphant entry into Jerusalem (and it was!) but it was also something so much more than a surface-level victory march. The palm fronds, the massive crowd, the fact that Jesus wept, all pointed to a more complex meaning than we often realize. Considering that a few short days later what we assume would be the same general crowd that welcomed Jesus into Jerusalem with a hero’s welcome would cry out for his crucifixion tells us something more complicated was going on in their Palm Sunday praise.

We’ve gathered the best quotes we could find from Palm Sunday sermons on SermonCentral.com to help you think through that Palm Sunday message and how this historic event applies to us today.

We will never know, this side of heaven, what terrible struggles took place in the spiritual world between Palm Sunday and Easter morning. Rodney Buchanan in The Lion Is A Lamb: The Humility Of God.

Corrie ten Boom was once asked if it were difficult for her to remain humble. Her reply was simple. “When Jesus rode into Jerusalem on Palm Sunday on the back of a donkey, and everyone was waving palm branches and throwing garments onto the road, and singing praises, do you think that for one moment it ever entered the head of that donkey that any of that was for him?” She continued, “If I can be the donkey on which Jesus Christ rides in his glory, I give him all the praise and all the honor.” Mark Schaeufele in A Messiah Who Serves.

For much of Jesus’ ministry He urged people to be quiet about who He was. When He healed he told people not to say anything, when He confronted demons who recognized Him as the Son of God He told them to shut up. That’s because it wasn’t time for Him to declare Himself as the Messiah. On Palm Sunday the time had come. Tom Fuller in The Significance Of Palm Sunday.

Billboards were not around. Telephones were not invented. The only way that they could have known that Jesus was coming was by word of mouth. That is impressive if you had all those people coming without our modern day advertisement ideas. Dan Borchert in Palm Sunday.

He came in peace to give the people peace. They preferred salvation from taxation to salvation of their souls – and so in a few days they would prefer Barabbas to be freed instead of Jesus. Jesus could see that this was their mindset, and so in the midst of this praise, with people waving the palm branches like a national flag, Jesus wept. Paul Wallace in Palm Sunday.

If Jesus knew that a donkey was waiting for him in the next town, he certainly knows what’s down the road for you. You may not know how that medical test is going to turn out but Jesus does. Nor may you know whether or not there will be any decent jobs for you when you get done with your education but Jesus already has in mind how he plans to provide for you. Understanding that Jesus knows all things gives us confidence to follow his directions. Though Satan would have us believe otherwise, living by Jesus’ words will never send you on a fool’s errand. Daniel Habban in Ponder The Palm Sunday Paradox.

Our lives, the roads we walk lead us to either follow behind Christ, singing his praises, or going before him, laying palm branches and cloaks. Missionaries go ahead, paving the way as Jesus rides in to hearts by His gospel. Then pastors, teachers, and congregations follow behind, praising God for his kingdom that has come. Edward Frey in The Pathway of Palm Sunday.

We like control; God, it seems, loves vulnerability. If we haven’t touched and united with the vulnerable place within us, we’re normally projecting seeming invulnerability outside and judging others for their weakness. Paul Andrew in Palm Sunday And Good Friday.

He is at once, a righteous God and a Savior. He is full of grace and truth. God is the just one, who justifies those who have faith in Jesus. Do you see the holy love of God? Were God merely holy, we would have been destroyed. Were God merely love, the lack of discipline would destroy us. A holy God cannot disregard wanton rebellion and a loving God cannot disregard His children. But a God of holy love will do what no one can imagine. Michael Deutsch in The Road To The Cross!

At the heart of Palm Sunday is Jesus’ desire to bring peace into our lives and to be willing to carry whatever burdens in life that are weighing us down. But the only way Jesus can complete his desire, is for us to allow him to march in and take over without having to fight us all along the way. Have you ever told God, ”you can march over there, but don’t come this way because I’m not yet ready to surrender.” Where ever Jesus is not fully welcome in our lives, is where the real battle is taking place for our attitudes. We’re doing all kinds of things hoping to find some peace, but God is saying, until you get your attitude together right here, you shall not have peace as you seek for it.  Rick Gillespie-Mobley in Choose Your Attitude.

Jesus knew that the religious leaders were out to get him and yet instead of slinking into the city under the cover of darkness he rides triumphantly in a manner that is bound to reveal him as messiah. Denn Guptill in Making A Messiah, Palm Sunday.

In times of war conquerors would ride in chariots or upon prancing stallions. But in times of peace, the king would ride a colt to symbolize that peace prevailed. So, for Jesus to ride into Jerusalem upon a colt is to declare that He is a King proclaiming peace. Melvin Newland in Palm Sunday – Jesus Was Weeping!

The Christian church was born in the very city where Jesus was publicly killed and buried. The belief in a resurrected Jesus had to be authentic to take root in Jerusalem and grow to encompass the whole world. The Christian church is now the largest institution that exists or has ever existed in the history of humanity. Clearly, this would have been impossible if the resurrection was a story.  Don Hawks in Who Is Jesus? — A Palm Sunday Lesson.

Their cry of “Hosanna” is a transliteration from Hebrew into Greek (into English). It comes from Psalm 118:25, and seems to mean, “Save now, please.” Although the people might not understand it yet, this is what Jesus had come to do (cf. Luke 19:10). Christopher Holdsworth in The First Palm Sunday

Palm branches were to the Jews of that day what the stars and stripes of our flag means to us today. Don Hawks in Who Is Jesus? — A Palm Sunday Lesson

The tragedy of this event was the fickleness of the people. At this point they are acclaiming the Lord Jesus as the long expected Messiah – within a few days they were crying for His death! Colin Coombs in Palm Sunday – What Is It All About?

Now when Jesus approached and saw the city, he wept over it…Clearly, there is this sense of purpose that drives Jesus toward Jerusalem. But don’t misunderstand this clear, resolute purpose for being defeated. Joey Nelson in Palm Sunday – Luke’s Journey Notes.

One of the scariest questions in the Palm Sunday story…. How will I respond when Jesus comes riding humbly into my life? Will I recognize the time of God’s coming to me?  Will I recognize and welcome God’s personal visit?  Marty Boller in Palm Sunday: How Will You Respond?

But Jesus didn’t even make it through the gates of Jerusalem unscathed. In that holy city he was beaten and then taken outside to be crucified as if he was some kind of criminal. But this wasn’t a tragic mistake. This had been God’s plan. Just as squeezing a tube of whitening gel will produce the thing your teeth needs to get rid of the yellow stains, squeezing blood from Jesus was the one thing we sinners needed to whiten our sin-blackened record! Daniel Habban in Psalm 118: A Palm Sunday Preview.

Have you heard that crowd of noise in your life? What has your answer been? Do we join the crowd, or step out of the crowd and take a stand for what we know is true?  Because a day will come when we aren’t part of any crowd anymore. A day will come when we are one on one with the Creator of us all, God the Father. And we will be judged, not on what we did as a crowd, but what we did as individuals with His Son, Jesus Christ.  Stephen Buhr in Who Is This? A Message For Palm Sunday.

For more great Holy Week quotes, check out these articles:

51 Easter Quotes Every Christian Should Read