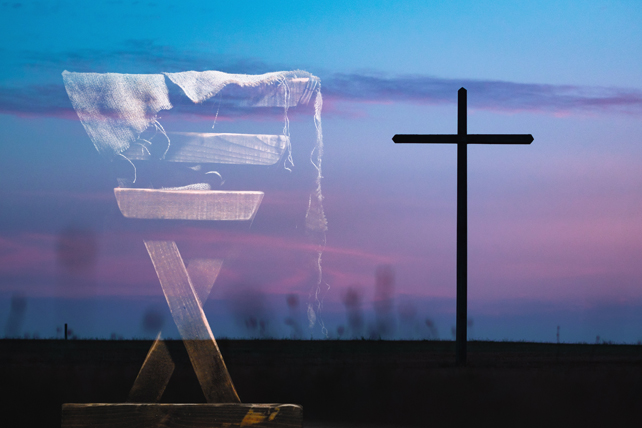 The image of Christmas is perhaps the image of the manger—tattered blankets and tufts of hay nestled in a quaint, wooden trough, now a makeshift crib.

It would no doubt fail modern standards of baby cribbing, not to mention sanitation inspections given its prior use. Yet it was fit for the Bethlehem baby and was more than a useful convenience or a necessary stopgap. It was the God-ordained sign signifying a Savior.

Like bookends facing opposite directions, yet an undeniable pair, consider the relationship between the manger and the cross.

The Manger and the Cross of Christ: Symbols of Celebration

The manger and the cross are unlikely symbols of celebration. To give them places of honor would have been beyond odd for first-century tastes.

…and not the aesthetically pleasing, carefully repurposed pallet designs we see on display today. They were likely not even wood, but roughly hewn stone boxes whose design focused on function—holding animal fodder. In that function, the manger found itself surrounded not by well-dressed wise men, but by the waste of animals.

Crosses were not fashionable jewelry or signifiers of church buildings. They were machines of execution. Imagine modern equivalents.

What would the world make of a group of worshipers intent on revering a hangman’s noose?

How might we ridicule those who held a special place in their heart for the gas chamber?

Why is it that the electric chair hasn’t caught on as a gold pendant hung around the neck?

With these images we can begin to see why Paul wrote:

For the word of the cross is foolishness to those who are perishing, but to us who are being saved it is the power of God. … For indeed some ask for signs and many search for wisdom; but we preach Christ crucified, to some a stumbling block and to many foolishness, but to others…the power and wisdom of God. (1 Corinthians 1:18, 22–24)

It is fitting that we should celebrate such common items, such crude objects, for they preach to us this message: That which Christ touches is redeemed from its reputation, trades shame for honor, and gains godliness where there was none.

That is a message, of course, not about mangers and crosses, mere objects of stone and wood, but a message for people. Christ has come to redeem mankind. And if objects designed for ignoble use can be transformed into objects of veneration through their connection with Jesus, how much more so can we, who were designed for a divine relationship with God Himself come to life through a relationship with Jesus.

I invite you to take part in that relationship with God through Christ. If you’ve never trusted Jesus to be your Savior, know that He came to the world to save us each from our sins and to give us life.

Know that the sign to the shepherds was a manger. In many houses, shepherds would have been unwelcome and unwanted, but knowing that they were seeking a place with a manger, a place where people were used to the keeping and keepers of animals, they sought Christ without reservation.

You, too, might think God is unapproachable. Know that He has given us a sign, sending His Son as human, familiar with our weaknesses, and welcoming us to receive Him, to receive His life.

For the baby in the manger and the man on the cross is Jesus the risen Savior who conquers death and gives life to the lowly.