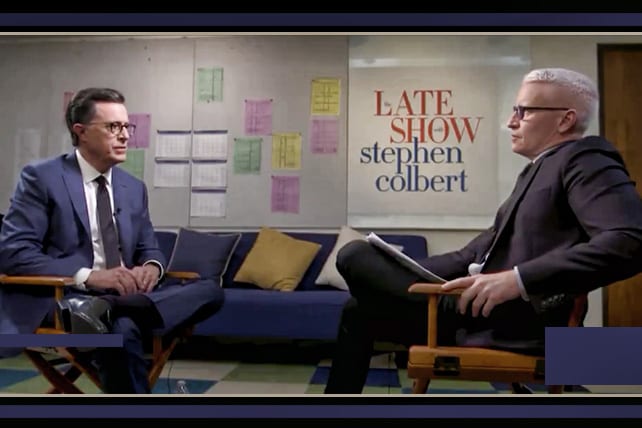 You might have seen the recent conversation between Late Show host Stephen Colbert and CNN anchor Anderson Cooper. They were discussing how to deal with grief and loss, and Cooper was reflecting on Colbert’s words to him on the death of his mother.

Choking back tears, Cooper asked, “You said ‘what punishments of God are not gifts?’ Do you really believe that?”

“Yes,” replied Colbert, “It’s a gift to exist and with existence comes suffering. There’s no escaping that.”

Colbert then went on to say that either we’re grateful for all of life, including the difficult parts, or we’re not grateful for any of it. It was a really beautiful exchange between grieving friends.

What punishments of God are not gifts?

Who thinks like that? Well, Colbert admitted he got the line from British novelist, J.R.R. Tolkien:

“A divine ‘punishment’ is also a divine ‘gift’, if accepted, since its object is ultimate blessing, and the supreme inventiveness of the Creator will make ‘punishments’ (that is changes of design) produce a good not otherwise to be attained” (The Letters of J.R.R. Tolkien, 286)

In context, Tolkien was suggesting that the elves in his stories, although immortal, envy humans who experience grief and loss because of the precious good these “punishments” bestow. What good? Tolkien says loss and grief, as dreadful an experience as it is, can be a gift, if accepted as such because it can bring a blessing we would never have received without it.

While the Colbert-Cooper conversation focused on grief, the same question applies to those other wounds that we often fear to be punishments, things like illness or misfortune. Could it be true that even a chronic illness could be received as gift? Could such suffering reveal a blessing in disguise?

I received a touching email from a reader this week. She told me that she and her husband were missionaries in Africa for 15 years, working initially with AIDS orphans and resourcing medical programs, and then sharing information on trauma-based care.

It was important work and they both loved doing it.

Then her husband was diagnosed with Charcot-Marie-Tooth disease (CMT), a progressive neurological disorder affecting the peripheral nervous system. It’s a muscle-wasting disease that mainly affects the legs and arms. Sufferers experience weakness in their hands and their ability to walk is compromised.

They realised their missionary days were over, so sadly they returned to Michigan permanently.

One day while waiting in line at the DMV to renew their driving licenses, they overheard the interactions of the people around them. Most of them were seasonal migrant workers from Mexico trying to obtain their (legal) driving licenses. With no one offering them assistance to translate the forms, they weren’t having much success.

The former missionaries offered to help and they began chatting with other Mexican workers waiting. Everyone really hit it off and the missionaries ended up inviting the group for a meal. One thing led to another, and before they knew it, there were 40 Mexicans coming over!

It turned into a fiesta!

She wrote, “We had to rent a barn and our kids helped with games and desserts. We hired a wonderful Christian Mexican man who prepared the most delectable authentic Mexican meal with Mexican soda and wonderful music.”

Everyone wanted to do it again. And again.

Now, the missionary couple, along with over 60 volunteers from nine nearby churches host the fiesta, inviting migrant workers to an afternoon of great food, football, volleyball, and basketball.

Her husband’s illness had closed the door on one life, but opened it to a whole new stage. I’m sure they aren’t glad for his CMT. I’m sure they’d hand that gift back in a heartbeat. But it’s theirs now. And it’s through his wound they have found a new life, a life lived among the overlooked and ignored. They’ve discovered what the 13th century Persian poet, Rumi said,

“Suffering is a gift. In it is hidden mercy.”

Recently, I was talking to someone else who has found the hidden mercy in their suffering. David is a graduate of the college where I teach, and he and his wife Christine have been serving as missionaries in Peru. To their shock, Christine was diagnosed with early onset Parkinson’s disease. Often thought of as a disease that affects those over 50, she started showing symptoms in her thirties.

Apparently, in Peru, if someone suffers from a disability or a chronic condition there is shame attached to their family. As a result, the disabled are kept indoors, out of sight. And those people who contract chronic illnesses do their best to hide their condition.

At first David and Christine thought they might need to return home for medical care, but they’ve found ways to manage the illness and have decided to remain overseas. Then, an interesting thing began to happen. Peruvians also suffering with chronic illnesses began to seek Christine out. She has found a whole new avenue for serving others precisely because of her illness, not in spite of it.

In her woundedness, she has become a source of life for others.

I think Henri Nouwen said something like that in his book The Wounded Healer, where he wrote about how our wounds can be a blessing in our lives and the lives of others, if we’re willing to receive them as gifts.

Our wounds, whether grief and loss, or chronic illness, or mental health conditions, provide us with the opportunity to know the suffering of others first-hand. They allow us to see things that those who don’t suffer similarly can’t see. Woundedness from grief and loss fosters empathy and understanding, and binds us together in our shared, broken humanity.

And for those of us with the faith to see it, our wound is a means by which we can access God. Not to blame God for our suffering or loss, nor to relentlessly beg God to remove it from our lives. Rather, when we suffer we draw close to the very character of the God-who-suffers.

Stephen Colbert tells Anderson Cooper, “In my tradition, the great gift of the sacrifice of Christ is that God does it too, that you’re really not alone. God does it too.”

As you examine the wounds in your life, could it be that rather than revealing the absence of God in your life, they are the cracks through which the light of God can shine?

That’s why I’ve used Paige Bradley’s stunning sculpture of the cracked light woman as my cover photo above. Through the fissures in that broken woman’s body creeps the light of hope and healing.

Run your finger metaphorically over your wound. Can you receive it as a gift?