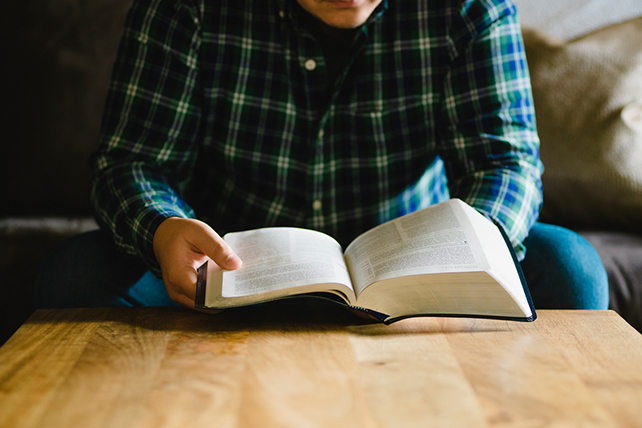 It is idolatry to make the Bible the foundation of your faith. That’s what one Christian leader said in recent history. It’s also a trend in popular apologetics. Is this a good way to talk about the Christian faith?

For starters, I understand, I think, what is the motivation behind this kind of statement. Often Christians are in a position of responding to claims from their unbelieving friends that faith in Jesus is somehow disconnected from evidence. “There’s plenty of really good evidence for the resurrection!” they want to respond.

But why this move to disparage the idea of making the Bible our foundation?

I’ve heard some leaders put it in the context of the very first believers, those who, for example, came to faith at Peter’s preaching at Pentecost. They didn’t have a New Testament, they argue. So, they conclude, the foundation of the faith of the first believers was the resurrection of Jesus, not the New Testament. This seems logical enough, doesn’t it?

The problem is the first believers actually did situate their belief in the resurrection in Scriptures, the Old Testament. For example, consider our oldest Christian creed, which scholars across the spectrum, Christian and skeptic alike, agree was developed within less than three years of the resurrection. Look at the way the Apostle Paul talks about this creed he received and later passed on:

This early creed was on the lips of the first believers after the first Easter Sunday. What was the foundation of their faith? It is the resurrection of Jesus as interpreted by the Scriptures. What Scriptures? This is a reference to the Old Testament. These believers were interpreting the historical event of the resurrection according to the Old Testament. This was their foundation.

Isn’t this merely splitting hairs? No, actually it is not. Experiences and historical evidence are not self-interpreting. This early creed doesn’t discount the historical evidences for the resurrection. Look at all the references to eyewitnesses! It’s almost as if Paul is saying, “Hey, most of these eyewitnesses are still alive. Go talk to them for yourself!”

But don’t miss the important construction of the creed. The event of the resurrection is seen as authoritative because it is interpreted in light of the Messianic promises of the Old Testament. That Christ died . . . according to the Scriptures . . . that he was raised . . . according to the Scriptures. When Christians separate the resurrection from Scriptures they are doing something that the earliest believers did not do.

That’s why when I hear apologists or Christian leaders argue against making the Bible our foundation by referencing the first believers, I’m a little perplexed. What evidence do they have for making evidence the foundation of their faith? The earliest Christian creed is the one found in 1 Corinthians 15. If we want to start looking for evidence for how to think well about these issues, this text should be primary. And what do we find there? We find the foundation of faith is Scripture, God’s revelation of himself—God’s interpretation of himself and his actions.

From Atheist to Deist to Denier of the Resurrection

Consider Habermas’s friend and debate partner, Antony Flew. Flew spent most of his career as an atheist before coming to believe in some sort of deity. In his debate with Habermas, Flew conceded that the evidence for the resurrection is superior in quantity and quality to any other miracle claim from any other religion. Yet he didn’t believe Jesus rose from the dead. He was willing to overturn the body of his academic writings from a lifetime of teaching atheistic philosophy, but he was unwilling to accept the resurrection.

Why? Was he confused? Was he unintelligent? No. The problem was, he was unable to properly interpret the evidences for the resurrection.

That’s because evidence doesn’t interpret itself. Without the work of the Spirit opening our eyes and removing our bias we will not properly interpret the evidence for the resurrection. We will see it as foolishness.

Let me frame this like a catechism to summarize the simple point I’m trying to make:

Question: How do we properly interpret the evidence for the resurrection?

Answer: According to the Scriptures (1 Corinthians 15).

I’m reminded of what one atheist friend told me a few years back. He said even if I could convince him the resurrection happened, which he was impressed with the breadth and depth of evidence, he would be forced to conclude that some really odd event happened that must have a natural explanation since he rejects the supernatural. He would interpret the evidence in light of his larger worldview commitments.

But it should always be remembered that this is an apologetic strategy. Thus, it is not a prescription for how a given text should be approached in the original languages and translated, or how a systematic theology is developed, or how a sermon is written. So it should never be concluded that the use of such methods in an apologetic context indicate a lack of trust in Scripture as a whole, or, say, the Gospels in particular. Nor should it cause others to question or doubt their beliefs. Thus, it should only be understood and utilized in its proper context.

So, a short admonition is in order to conclude. Preach the resurrection. Use all the evidence you can find. Trust me, there’s plenty. But don’t relocate the center of your faith to something other than Scripture. The first disciples didn’t. You shouldn’t either.