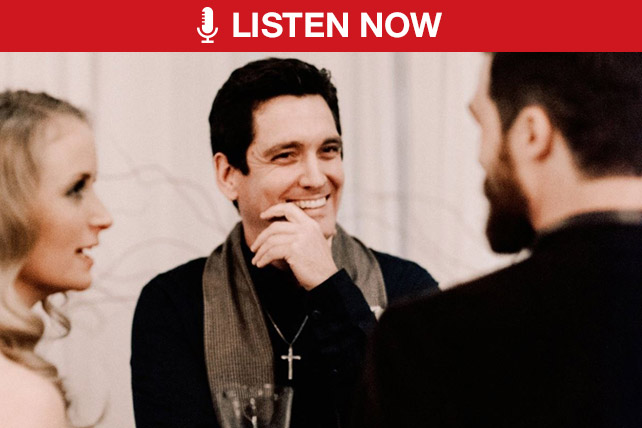 Gavin Rogers serves as an associate pastor of Travis Park United Methodist Church in San Antonio, Texas. Pastor Roger’s ministerial work concerns itself with helping the poor and homeless in San Antonio. Recently, Pastor Rogers traveled to Mexico to join the migrant caravan traveling from Honduras to the U.S. border.

– You spent a handful of days traveling with the migrant caravan in Mexico. What did you see?

– What responsibility do you think pastors have to refute things like misinformation and “fake news”?

– What do you think is the Christian response to immigration?

“Some that are better connected to immigration circles than me have said that a higher percentage than normal of this caravan from Honduras are evangelical Christians or Protestant Christians.”

“The Christian faith follows a Savior that was an immigrant.”

“In Leviticus, it says to welcome those who are foreigners into your land like ‘native-born’ or you can translate that into blood relative.”

“There’s a lot of immigration going on in [the history of] our faith.”

“Martin Luther King said you have a problem when you have poverty, militarization, and racism…all those three things you can associate to this[migrant caravan].”

“Certain groups call this an exodus, not a caravan.”

“Our human condition and our tendency to mistreat the immigrant is a universal problem.”

“People are picking and choosing [which laws of the land to support and obey].”

“As Christians, we don’t worship a kingdom of presidents. We worship a King of Kings and that’s Jesus Christ.”

“I really don’t see a divide between the liberal, moderate and conservative church [concerning how we should treat immigrants].”

“The Christian response to immigration doesn’t change based on what country you live in or what politics you operate under. It’s pretty clear in Scripture how to treat the immigrant, and if we do it that way, even when there’s a perceived lack of resources, even when there’s extreme poverty, political confusion, it can break down walls and relationships to be peaceful even when there’s a lot of stress.”

“If the conservative voice and the liberal voice came together for just a few issues, think how powerful those issues could be. I mean we saw it with the separation of families [at the border].”

Links Mentioned in the Show:

Pastor Wanted to Know the Truth About the Migrant Caravan. So He Joined It