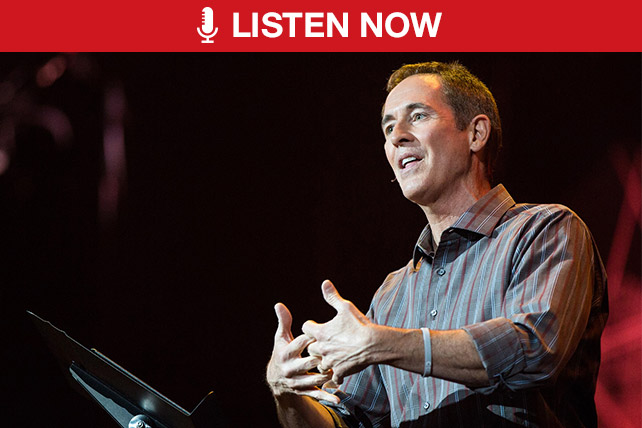 Andy Stanley is the senior pastor of North Point Community Church, Buckhead Church, and Browns Bridge Community Church. Andy received a bachelor’s degree of journalism from Georgia State University and later earned a masters degree from Dallas Theological Seminary. He lives in Alpharetta, Georgia with his wife, Sandra, and his three children: Andrew, Garrett, and Allison.

– Can you explain why you’ve stopped saying certain phrases like “The Bible says” when you preach?
– How has this change in language affected those who listen to your sermons?
– Instead of placing the focus on Scripture’s inerrancy, what should we focus on when evangelizing?

“The time has come for us to step back onto a more sure footing, and I think a firmer foundation, and to build our case for our congregations and for this generation [Millennials] on the event of the Resurrection, and not the authenticity or the infallibility of a text. And it’s not because I don’t think the Scripture’s infallible…”

“The Bible did not create Christianity. Christians created the Bible….What created Christianity was the first Easter morning…”

“I think [some people] put [the Bible] in the place of Jesus.”

“When people hear the story [of the Resurrection], they lean in because it’s undeniable and it’s extraordinary.”

“All the New Testament imperatives that we find after the gospels are simply applications of Jesus’s new covenant command to love as I have loved you. The Apostle Paul wasn’t coming up with new rules and new laws.”

“If ministry is hard, you are doing it correctly.”

Mentioned in the Show