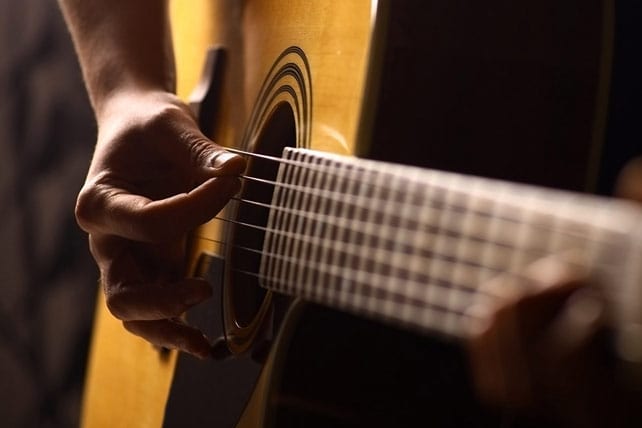 We have choices in how we mix an acoustic guitar but we must know how it sounds before it’s amplified, as the type of wood does affect the sound. As an added note, some woods change the tone with age. For example, as the Koa ages and the guitar is played more and more, it will begin to sound like a mahogany guitar, or as I saw described, “a mahogany on steroids.”

Listen to the tone of the guitar when it’s not amplified — and get ten feet from it so you’re hearing the direct sound. Make note of how the low, mid, and high frequencies are represented.

I’ll dispense with listing out guitar string brands and models except to say that the gauge of the strings (heavy, medium, light) affect the sound as does the material and methods in which the strings are produced. I use DR acoustic strings, not because the company sponsored me (ha ha) but because I love the tone I get when they’re paired with my guitar.

The only other note to add with strings is the age.

The last part of understanding the sound at the source is how the sound is captured.

There might be a built-in on-board pickup located inside the guitar under the bridge. Or, a portable pickup can be placed across the sound hole.  The sound of the same guitar will be different in each scenario because the sound is captured in a different space.

A quick note about guitars with on-board pickups. They’ll have a mini-EQ built into the side of the guitar. If these EQ settings are bad, the guitar will sound terrible.  Flat line the mixer EQ for this guitar and spend an evening with the guitarist and tweaking the guitar’s on-board EQ for the best setting. The other option is to run it flat — all EQ settings at 0. Don’t lower all the EQ controls on the guitar, that applies cuts to all frequencies.

The final method of miking the guitar is with an instrument microphone. In this case, place it around the twelfth fret, a foot away. It means the musician can’t move around much, but it will sound great!

The musician can either plug into the system from here, if not directly miked, and go into a passive DI to convert from their unbalanced instrument cable to a balanced XLR, or go through their choice of acoustic guitar DI boxes or pedals. This can drive you crazy or make you very happy. In short, what they think sounds good and what you think sounds good can be quite different. I’ve experienced both.

At this point, you have two options:

Blending signals can be beneficial because a wet signal can lose frequency distinction. Imagine a strummed guitar with a lot of reverb. Add in some of the original sound and you get both the brightness of the raw guitar as well as the reverbed sound.  How much the two are mixed is up to you. These two channels provide more opportunity for creative mixing to get the intended sound.

Years ago, Jeremy Blasongame told me the bigger the band, the tighter the sound of each instrument. It’s true. Let’s say the only person leading worship is a guitarist. In this case, the guitar should be full, occupying as much of the frequency space as possible. This can be through EQ work and effects.

As the band size grows, the more the core frequencies of the guitar should be emphasized. Better put, minimize what’s not needed and then boost where appropriate. Otherwise, you might have too many instruments fighting over the same frequency space, and that’s not good!

How do you know where to draw the line?

Look at all of the instruments on stage and where their core frequencies are located. For example, the kick drum might be in the 80-200 Hz range and the toms overlap that a little and you move on up through the bass, keyboards, and other instruments. Some overlap is ok. However, you don’t want the low end of the guitar to be heard if you’ve got acoustic drums and a bass guitar. It will only blur the lower part of the mix.

Some of it’s a matter of experimentation. I suggest intentionally cutting too much so you know what doesn’t sound right and then adding it back in until it does.Personally, I roll off to around the 200Hz mark, using my high-pass filter (HPF), but that can vary based on the other instruments in the band. If I find I’m getting a thicker amount of low-mids then I’ll apply a separate narrow cut in the appropriate area.

The HPF channel-level control allows only frequencies above the specified point to pass through the filter. In analog mixers, the HPF has a set frequency point, such as 100 Hz or it has a knob for controlling the range. If you see a label by a button that reads, “/100” then that’s the HPF label indicating a 100 Hz set point. In digital mixers, it’s a flexible point. I usually start at 100 Hz and roll off higher until I get what I need. In a rare instance, a high-end analog mixer might have a flexible HPF.

Analog consoles will have less EQ ability so use the HPF for the low-end cut and then listen for anything else that needs to be cut and use the remaining semi-parametric controls to do the rest of the work. Occasionally, an analog console will have individual Q (bandwidth) controls on the EQ’s which would make it a fully parametric EQ, but that’s rare.

I look at equalization and “mixing” from this point as a multi-step process that starts with cleaning. I listen to the sound I’m getting from the instrument and where it sits in the mix (in relation to the other instruments) and remove what’s either not necessary or sounds bad.

An example of what’s not necessary is rolling off the lows when I’ve got drums and acoustic bass on stage as mentioned above.

When it comes to the problem areas, you might have a tight frequency that’s giving you problems. You can sweep through the frequencies with a deep cut to reduce a tight band of frequencies.

When it comes to working to emphasize frequency areas of the guitar, consider these areas:

The first things to ask yourself when it comes to effects is, is anything else needed?  I find reverb can be helpful but it’s not the only option. I might have an acoustic guitarist who is using on-stage effects to give me a great sound. If that gives me exactly what I need, I don’t add effects, but…

I find the right amount of reverb can bring an acoustic guitar to life, giving it depth in the mix.  However, before talking reverb, let’s look at the other effects.

In general, I don’t compress acoustic guitars. However, there are times it can be beneficial. When the musician is finger-picking a guitar, by adding compression, you can bring out the transient sounds that make up that beautiful richness of a picked guitar — much of which is in the high end.

This one is tricky and assumes the musician strums at close to the same volume every time — the faster they strum the more likely this is the case. Apply a gate to the main attack as the strum comes through but then quickly gate the sound between strums, not eliminating the sound completely but reducing the volume as this method will bring out the rhythmic element of the guitar.

The three common reverb types are room, hall, and plate. The primary difference is in how much the reflection time lasts. The bigger the acoustic space in which the effect is modeled, the longer the time of reflection. The benefit of plate is a heavier amount of reverb upfront but with a fast decay time.

I pick the type of reverb based on the song arrangement and the number of instruments.  The faster and bigger the band, the smaller the reverb time. But a solo musician in a large room might allow me a larger and longer amount of reverb — depending on the song tempo.

My go-to reverb is plate but it’s hard to say that because so many factors come into play. It might be the effect I try first but that’s it.

Distortion, chorus, delay, and the list goes on. Anything is possible but not everything sounds good. I’ve used electric guitar Crunch to add more frequencies to the acoustic guitar so it sat better in the mix. I’ve added delay to make a small band sound big — getting the guitar to sound more like a 12-string guitar. It’s a matter of listening to the whole mix of the song and deciding if the guitar needs something else, and when you know the options you have, you know what you can do.

If you’re an acoustic guitarist and want to improve your tone, check out the two effects boxes below — I use the Para DI.