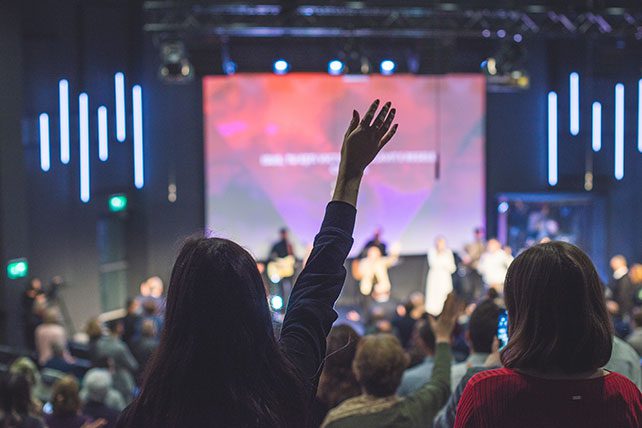 Children have a way of making you see things differently. We were flipping through the channels one Saturday when we came across a Coldplay concert. We were mesmerized. The visual layout was an open-air show, with tens of thousands of people lifting their hands and singing at the top of their lungs. My 5-year-old daughter, Norah, turned to me and asked, “Dad, are they worshipping?”

It’s a good question, isn’t it?

Had my children grown up attending rock concerts instead of church, they may have one day seen the visual layout of a large arena worship event and asked about the worship band, “Dad, are they entertaining?”

The merits and concerns of the many parallels between rock shows and modern worship services have been discussed at length in many other places, so I won’t attempt to tackle the subject as a whole here. For now, I just want to raise a question about the impact of our how our worship services appear. To put it simply:

What Does the Visual Layout of Our Churches Say About Worship?

In both a rock concert and a modern worship service the visual layout shows that a band takes center stage. Away with fancy pulpits (which once were a way of demonstrating the centrality of the Scriptures) and ornate altar tables (which once were a way of making Christ’s body and blood the centerpiece). Now the visual layout of most of our modern worship environments feature a drumset or a stack of amplifiers quite prominently. Nothing “wrong” with this. But let’s think for a moment about what it says:

So far, no inherent problem (debatable, I know!).

Let’s compare this to John’s vision of heavenly worship in the bvook of Revelation. In the Revelation, the “worship leaders”—the ones who cast down their crowns and cry out night and day, “Holy, holy, holy”—surround the throne in a circular fashion. The One who sits on the Throne and the Lamb are the visual center of heavenly worship. The “worship leaders” are the closest circle of many concentric ones to the throne. But they all face inward toward the Father and the Son.

In our modern worship contexts, the eyes of the worshipper are drawn to the worship leader, who does his or her sincere best to deflect the attention away from themselves and to Christ. But our eyes can’t help themselves. We cannot see the Father and the Son, so we look at the worship leaders.

The early Christians understood the need for symbols, images, and icons to direct our worship to Christ. That is why the Bread and the Cup were placed front and center in many Christian places of worship (once they had places of worship!).

If you visit an Eastern Orthodox Church (pictured) or a Roman Catholic Church, your eyes will be drawn to the Altar Table. Yes, there are priests who “lead us in worship.” But, visually, they are not the center. The choir, when there is one, sings from the side “wings” of the church.

In many Protestant liturgical churches, the Gospel reading is done each week from the center of the room, with all the people standing, to symbolize that the words of Christ are the very center of our worship.

I suggest that the following is true:

Whenthe worship leader and the Object of our wroship occupy the same visualk space the worshipper is easily confused – consciously and subconsciously – about who the Center truly is.

I’ll share one small example of something we did at NewLifeSundayNight. Last year, during Lent, we turned all the chairs in the room to face the back wall. The band—and the stage—became effectively the back of the room. A simple wooden cross was placed against the wall that people were now facing. I preached by that cross without a stage. Think of all the things that visual layout communicated (at least, we pray it did!):

– It made the band “musical servants,” leading from behind the people.
– It made the people focus their eyes on the cross, and not the worship leaders.
– It  showed them that they, along with the pastor—the one proclaiming the Word of Christ—stood on level ground before the cross.

Imagine praying that God will speak through the visual layout sacred space, not in spite of it! Many people got tired of it after the first few Sundays, but many more thanked us for challenging the paradigm.

What are some ways we can make even the visual layout of our worship services communicate the centrality of Christ?