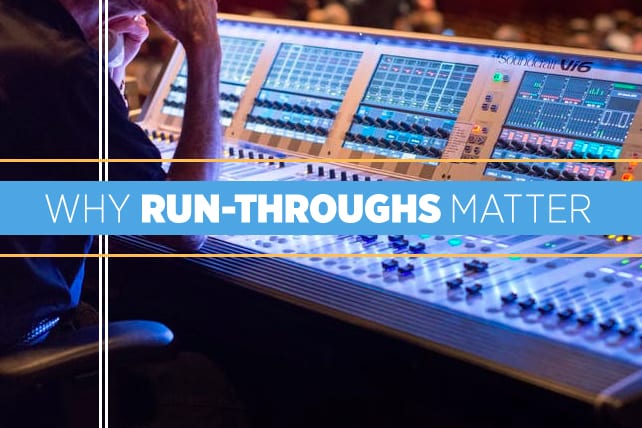 Those of us forging ahead into the 21st century of worship face challenges never before imagined! Gone are the days of throwing together a few hymns mere minutes before the service, then waving our arms as we lead the congregation behind the pulpit.

Those of us involved in contemporary worship (especially worship leaders in smaller churches who end up doing…everything) must coordinate a complex sequence of events—lyrics projection, praise band dynamics, song selection, vocal mix, video, sound and lighting—and we must blend these events into a smooth worship flow. With so much going on each Sunday morning, run-throughs are critical.

This simple rule saved me much pain and sorrow: We must run through our entire praise set at least one time prior to the service.

If we don’t run through every lyrics slide, one will turn up missing or misspelled during the service. The problem is caught in the run-through.

If we don’t run through the entire track, a horrible glitch will erupt in the middle of the performance. (Ever see that old VH1 special where Milli Vanilli’s track got stuck, repeated a phrase over and over, and the embarrassed duo ran off the stage?)

If we don’t run through tricky song transitions we’ll cause a musical train wreck and disrupt worship.

If we don’t run through…you get the idea. I know run throughs are sometimes hard or nearly impossible to squeeze in, but insist upon it.

As I found out later in my worship career as I transitioned from music director at a smaller church to a keyboardist in a larger church, the megachurches had this figured out from the get-go. Any church with a top-notch sound you’d envy doesn’t necessarily have the best players in town—they have the most well-rehearsed. Some megas I’ve played at actually have two complete run-throughs every Sunday morning—they’ll start with a short rehearsal/warm up followed by an informal music-only run-through, then after a short break they’ll have a full run-through with music/sound/tech.

Bottom Line: Complete run-throughs will drastically improve the flow of your service and the emotional well-being of your praise team.