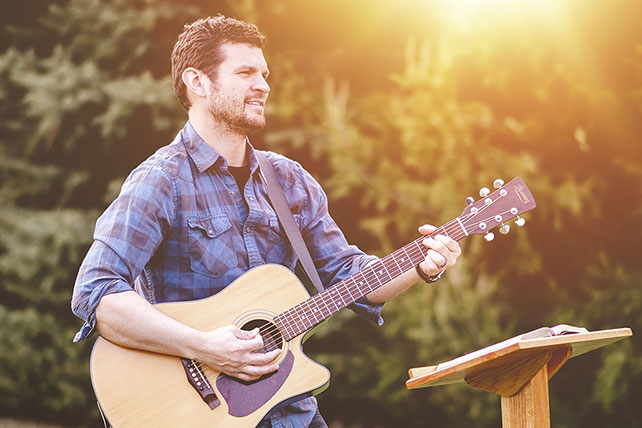 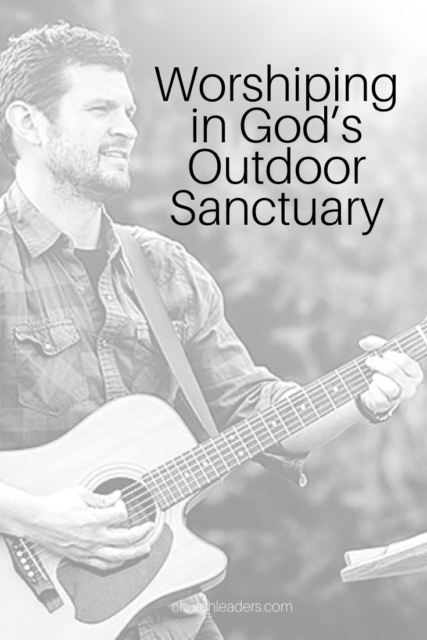 For the past five weeks, one of the locations of our two-sited congregation has hosted services outside to have a safer worship experience during the Corona crisis. As we are located near the campus of Geneva College, they have graciously allowed us to use their grounds to hold the services as long as we practice social distancing. I thought I would share an anecdote or two from these services and then, more to the point, one experiential lesson about worshiping outside from the Lord during these times.

Anecdotally, the first three weeks, falling at the end of March and early June, were each on beautiful mornings. Those first three Lord’s Days here in Western Pennsylvania were uncharacteristically sunny, the temperature in the low 70’s, and occasional breezes and cloud covers made them even more pleasant. Sitting on the aluminum bleachers of the Reeves Field football stadium, many of us did have to don sunglasses because of the glare.

However, the fourth Sabbath the sun was out in full force. The temperature climbed toward the 90’s as we worshiped, with the humidity matching that number. As the service went on, the heat grew unbearable. The shade of umbrellas provided little relief from the radiating heat from the bleachers around us. People began leaving, parents found shade outside for their little ones, and at least two people fainted before we were done. As one participant put it, we were liked baked potatoes covered in aluminum foil sitting on those bleachers!

So yesterday we met earlier in the morning and worshiped on the grass underneath large sycamore and oak trees on Geneva’s campus. Sitting on blankets and lawn chairs in little groups, being able to hear more clearly the service and others singing around us, and listening to God’s Word preached outside – like Jesus so often did! – made for a peaceful, pleasant service. Witnessing one of my grandson’s baptism on the lawn of the school his mother and father attended, and then chasing another grandson around that lawn after the service, made the day extra special for Miriam and me.

But it is a lesson the Lord is impressing anew upon me through these experiences that I wanted to share with you. The last song in the Psalter begins,

Praise the Lord!
Praise God in His sanctuary;
Praise Him in His mighty expanse.

We are to praise God in the sanctuary of a dedicated church building. But there are times for praising him outside under heaven’s mighty expanse. Many Christians around the world have to meet outside. In a visit to the Philippines, one of the churches where I worshiped met outside a hut with chickens and dogs running around. The denomination I serve in has its roots in Scotland where our forefathers in the faith were driven out of the established church and forced to worship out in the moors and hills. Worshiping outside, away from the formality of a church building, has gripped me again with this significant truth. In worship, we should always remember that God is our Creator.

As the Apostle John sees heaven opened up in his recorded vision in Revelation 4, the heavenly host give praise to the Lord in this manner:

Worthy are You, our Lord and our God, to receive glory and honor and power; for You created all things, and because of Your will they existed, and were created. (Rev. 4:11)

One foundational reason for worshiping on the Sabbath Day is to remember that the Lord made the heavens and the earth in six days, then rested on the seventh day. Our worship on the Lord’s Day should be filled with such remembrances.

Looking out at the rolling, tree-covered hills behind our pastor, hearing the calls of the cardinals and chickadees overhead, and feeling the breeze the Lord sent to cool us reminded me simply yet profoundly of Biblical truth. God made me. We never outgrow that first Sunday school lesson. But we need for it to grow out into a fuller, more mature understanding and experience.

Worshiping outside, I have experienced anew how dependent I am. The thermometer going up and down, or the winds rising or falling, can impact me so greatly. The Lord has used worshiping outside to remind me, as the heavenly host declare, that he has created all things. He made the three toads captured in a window well that my grandson and his friend giggled at afterward. But he also made the virus that no one can see but is wreaking havoc on the world we look at every day. Both teach me that I am so fragile and, as I sit under that mighty expanse, so very small and insignificant.

Yet the Lord is also reminding me that he delights to care for his people, and to use us in this world. The psalms we read and sing are filled with images of his providential care that are reinforced as we gather outside. After speaking of how the Lord provides for various animals and then man, Psalm 104 says, “O Lord, how manifold are your works! In wisdom have you made them all; the earth is full of your creatures…These all look to you, to give them their food in due season.” Psalm 42 pictures the discouraged believer as a chased deer panting for water, his problems as waves rolling over him, and the Lord as the rock on which he can stand. Psalm 8 speaks of the glory of the heavenly bodies above us, then marvels over how the Lord has set man to exercise dominion over all the creatures of the earth.

Seeing the graceful swallows swooping above us for bugs on the wing as we met in the stadium, or those lowly toads in the window well eating the bugs on foot coming their way, remind us of what Jesus said as he preached a sermon outside on a mountain:

Look at the birds of the air: they neither sow nor reap nor gather into barns, and yet your heavenly Father feeds them. Are you not of more value than they? And which of you by being anxious can add a single hour to his span of life? (Matt. 6:26-27)

We are to look at this creation and see how dependent on our Creator we truly are, knowing our life and indeed eternity is completely in his hands.

As I have sat under his mighty expanse in worship, it has caused the hope of the gospel to ring ever more true. This creation, groaning now under disease, decay, and death, will be redeemed fully one day. Those heavens above us will roll back at the voice of the archangel and trumpet of God, and Christ will return in his complete victory. He will raise and restore the bodies of His people, destroying every ugly disease, every spot of decay, and even death itself. No wonder Psalm 96 ends with this exclamation:

Let the heavens be glad, and let the earth rejoice; let the sea roar, and all that fills it; let the field exult, and everything in it! Then shall all the trees of the forest sing for joy before the Lord, for he comes, for he comes to judge the earth. He will judge the world in righteousness, and the peoples in his faithfulness. (Ps. 96:11-13)

Worshiping outside, especially during this time of havoc, has made me long all the more for that glorious day, when the created order shouts and sings because its Creator has returned. Come, Lord Jesus, come.

This article about worshiping outside originally appeared here.