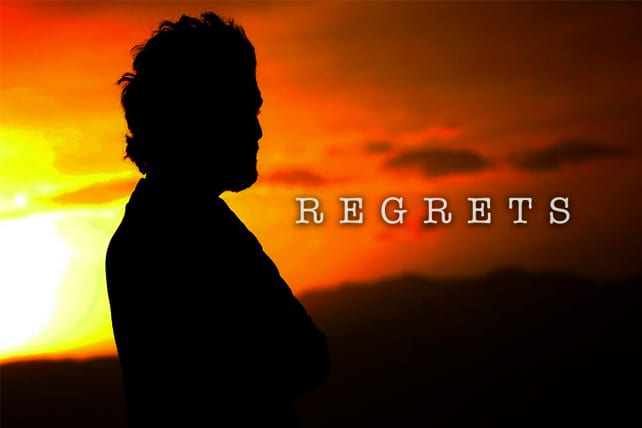 It’s that time of year when we look back at the year that has passed and wonder. Did we accomplish what we wanted? Did we read the books on our to-read list? Exercised as much as we had planned? Lost the weight we had gained the Christmas before? Spent as much time with God as we wanted to?

It’s that time of year where we may feel regret because we didn’t do what we had planned to do, because we tried but didn’t even come close, because well, we failed. Big time.

When we are confronted with our failings, our mistakes, our shortcomings, experiencing regret is natural. It’s those coulda/woulda/shoulda thoughts that keep you awake at night.

Yet spending too much time on regrets is useless, because regrets are a big waste of time. It won’t help you to regret the things that you didn’t do or the stupid things that you did, because you can’t change the past. I know that sounds like the biggest cliché ever, but that doesn’t change the fact that it’s also true. You can’t change the past, so regretting the past won’t help you. Here’s what will help you as you look back and are confronted with where you fell short:

Regret won’t help you, but remorse will. Confess your sins and shortcomings to God and where necessary to others. Make amends wherever possible with people you may have hurt. If you had planned to spend more time with your family for instance but failed to actually do so, admit your failure in this area to your spouse and kids. It will go a long way in mending things.

Don’t ever forget that God is a God of second, third and even hundred-and-thirty-fourth chances… No matter how many times you have failed, He will always welcome you with open arms!

Regret won’t help you, but analyzing what went wrong will. If you had planned to prepare your sermons way more in advance but found yourself writing them the day before, what was the cause? Did you forget to put it on your to do list? Did you set the wrong priorities? Did you let yourself get distracted by other seemingly important activities?

Analyzing what went wrong in the execution of your plans will help you improve your methods to increase chances of succeeding the next time.

After you’ve spent some time analyzing what went wrong, now make a plan to help you succeed next time. Often, this will have to do with changing your habits, something we will go into more detail on in tomorrow’s post.

There’s a famous French singer called Edith Piaf whose biggest hit was called ‘Non, je ne regrette rien’ (no, I don’t regret anything). The song is about having peace with your past and not spending time having regrets. If you’re making New Year’s Resolutions anyway, why not decide to make this your motto for the new year? Non, je ne regrette rien…