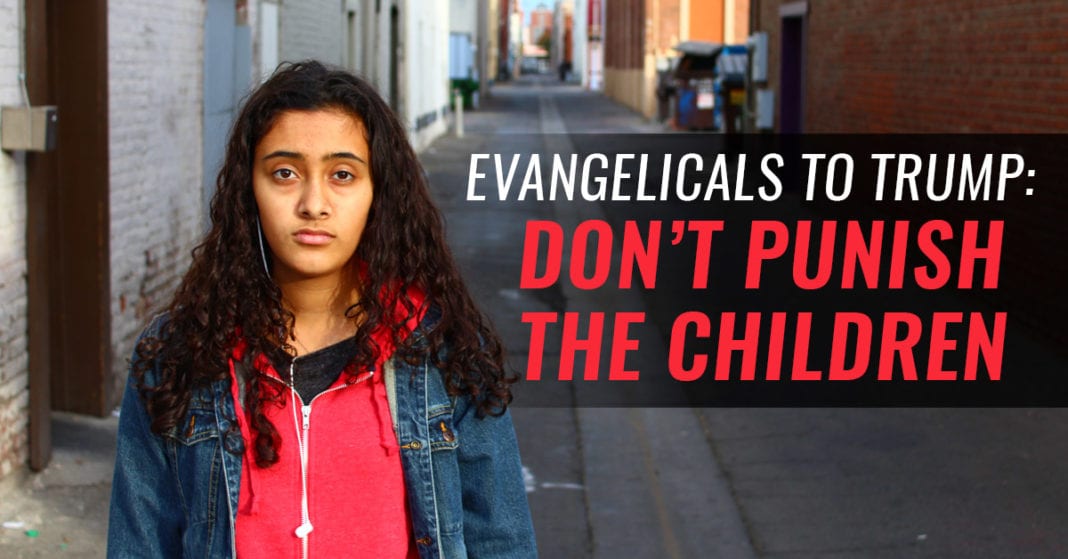 Dear President Trump:
We are writing to support your efforts to find a workable solution for Dreamers, those young undocumented immigrants in our country who were brought here by their parents and who contribute great things to our society.

So begins the letter to President Trump written and signed by a handful of evangelical leaders on August 30, 2017.

The President faces an uncomfortable decision of what to do with DACA (Deferred Action for Childhood Arrivals)—the Obama administration’s executive order protecting the children of undocumented immigrants. DACA allows these people—also known as Dreamers—to live and work in the United States with government licenses.

The reason the pressure is on President Trump, who promised to put an “immediate” end to the “illegal” DACA executive order during his campaign, to end the program now is several attorneys general from various states have given him until September 5 before they will proceed with legal action. While there are legitimate questions about the efficacy of this ultimatum, it has an approximate 800,000 Dreamers concerned for their future and has prompted this letter from evangelicals and another one from immigrant members of congress.

President Trump’s position is certainly not enviable at this moment. As someone known for speaking his mind readily—and some would say almost callously—this decision seems to have the president ruminating. In a February press briefing, he admitted “the DACA situation is a very, very…difficult thing for me.”

In their letter, leaders such as Russell Moore and Samuel Rodriguez argue that the Dreamers have a lot to offer America. “We have seen immigrants strengthen our great nation throughout its history, including their positive impact on our churches, our communities and our economy.”

Additionally, the letter argues those who have signed up for DACA have voluntarily undergone “screening for criminal activity and potential threats to national security.” They are also “leading in our churches and our communities,” studying, creating jobs and paying taxes.

It’s Not Their Fault

Essentially, the evangelical writers argue that the children should not be punished for the decisions of their parents. “They were brought here without their consent, and in most cases the United States is the only home they have known.” The immigration system is also culpable and the onus is on us as a country to “focus on real solutions for our broken immigration system.”

Eugene Cho of Quest Church in Seattle, Washington, says preventing Dreamers from reaching their full potential in the U.S. would be akin to placing a stumbling block in front of them. “To prevent individuals who were brought to this country as kids, through no decision of their own, from working, pursuing education and contributing to the full extent of their God-given potential is not only short-sighted, it’s also unjust,” Cho says.

Allowing Dreamers to Stay Is the Biblical Thing to Do

The letter also cites biblical heroes “from Abraham to Paul” who were immigrants. Even Jesus was an immigrant when he parents took him to Egypt to escape persecution. “As Americans, we are proud that our country has affirmed this biblical principle of valuing and protecting immigrants while also protecting national security,” the letter states.

Dave Gibbons, founder of Newsong Church in California, says throughout Scripture God “lovingly focuses on those who are vulnerable, the hurting and the immigrants. Symbiotic with our love for God is our love for the outsider.”

While it is direct, the letter is gracious and sympathetic to the difficult decision ahead of Trump. More than anything, it is calling on him to encourage Congress and other policy-makers in Washington to craft a long-term, workable solution for the Dreamers.

The long story short is that there is a reason God instructed us to welcome the foreigner and sojourner. We want what is best for them and our country. Now the question is: How, practically, do we make this work in our society?