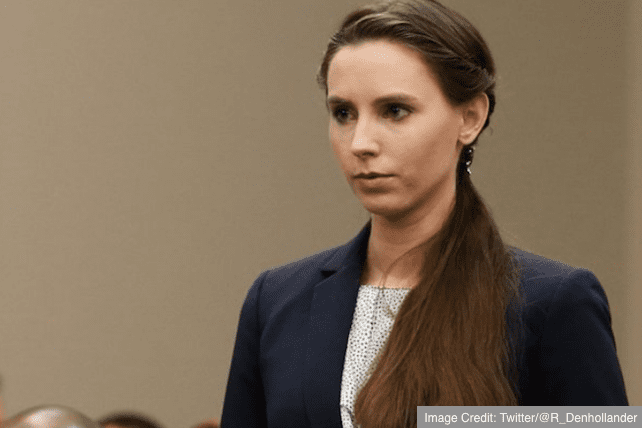 Rachael Denhollander, the first woman to file a report against USA Gymnastics doctor Larry Nassar, spoke to Martha MacCallum on Fox News on Friday, March 16, 2018. After playing a significant role in taking Nassar out of his predatory position and the enabling practices of Michigan State University, Denhollander is attempting to shed light on another institution that she believes enables abuse: the evangelical church.

This is not the first time Denhollander has spoken out against the policies that enable abusers in the church, previously she had spoken to Christianity Today about her concerns with Sovereign Grace Churches (SGC) in particular. She’s also made several lengthy statements on her personal Facebook page. However, the interview on Fox News is arguably the most visible platform from which she has articulated her concerns.

In this interview, Rachael Denhollander doesn’t just focus on SGC, though. She mentions a “systematic burying of reports of sexual assault” within the evangelical community. Although she doesn’t mention any other churches by name besides SGC, Denhollander says if one looks at the insurance claims that are filed against churches, evangelical ones have the most reports of sexual assault filed against them.

This is something Basyle Tchvidjian, a grandson of Billy Graham, has mentioned before. Tchvidjian shares the insurance claim numbers Denhollander refers to in her Fox interview. According to Tchvidjian, cases involving sexual assault in Catholic churches number approximately 228 a year, whereas there are approximately 260 a year in evangelical churches.

Tchvidjian’s organization, GRACE (Godly Response to Abuse in the Christian Environment), investigates sexual abuse allegations in high-profile Christian institutions. It was GRACE that Denhollander recommended SGC employ to clear the air of controversy surrounding the sexual abuse cases of several of their members. SGC refused the advice, stating, among other reasons, they did not feel Tchvidjian’s organization would conduct an investigation free of bias after Tchvidjian made negative comments about the church.

In the Fox News interview, there are four things, specifically, Denhollander believes churches do to bury sexual assault claims:

“The way the Evangelical church handles the issue of sexual assault and domestic violence is very much in opposition to Christ’s teaching. It’s in opposition to the Gospel,” Denhollander states.

Despite apparently losing the support of her church in the process of bringing her concerns over SGC to light, Dehollander still calls herself a conservative Evangelical. In the interview with Christianity Today, Denhollander admonished those afraid to speak the truth about sexual abuse and the church’s mishandling of abuse to not feel the need to protect the Gospel in some way.

You can see the full interview with Rachael Denhollander here.