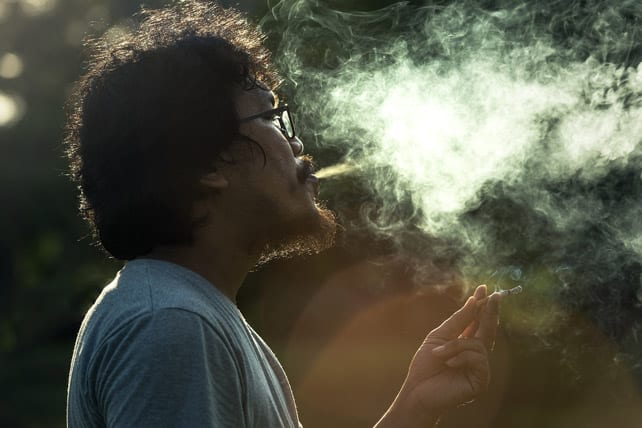 A poll by Gallup, released earlier this month, found nearly two-thirds of Americans say that smoking marijuana is “morally acceptable,” while 31 percent disapprove of pot on moral grounds.

That’s a sharp increase from a similar study by the Public Religion Research Institute five years ago that found fewer than half of Americans thought it was morally acceptable to smoke marijuana.

According to Gallup, Americans now rate marijuana use similarly to gay and lesbian relations, stem cell research and having a baby outside marriage. It’s seen as significantly more acceptable than medical testing on animals, abortion and pornography. But it’s viewed as less acceptable than alcohol use.

The results were dramatically different among weekly churchgoers, according to Gallup, as the moral acceptance of marijuana use dropped sharply to 41 percent.

Likewise, many evangelical leaders have concerns about marijuana use. Trent Hunter, writing for Desiring God, urged Christians to consider five questions before partaking of cannabis:

In an article for National Review, David French did not answer the question about the moral acceptance of marijuana directly but used Jesus turning water into wine from the second chapter of John to suggest a moral principle should guide use; whatever you ingest, you must maintain control.

“I’m always uncomfortable with “how far can I go” conversations,” French writes. “We live in freedom but also against the backdrop of a call to holiness, where “should” trumps “can,” and our lives are ultimately to be lived to the glory of God. Here, however, was my paraphrased answer: To lose control means being unable to fulfill my moral responsibilities. As a husband, father, attorney and officer, I have certain enduring, nondelegable duties. I can’t fail to be available to my kids because I’m drunk or stoned. I can’t dishonor my employer or the uniform because I’m “letting off steam.” If you can’t fulfill your responsibilities, then you’re out of control.

Moral Acceptance of Marijuana an Issue in Oklahoma Vote

Meanwhile in Oklahoma, where voters this week approved the medicinal use of marijuana, a pro-cannabis group used the Bible in it’s campaign.

Yes on 788 quoted a Bible verse to support its cause in a campaign flyer that asked: “How would Jesus Vote?”

The verse used was Genesis 1:29: “I give you every seed-bearing plant on the face of the whole earth and every tree that has fruit with seed in it. They will be yours for food.”

Fifty-six percent of Oklahoma voters supported medical marijuana. Not far from Gallup’s findings on the issue.