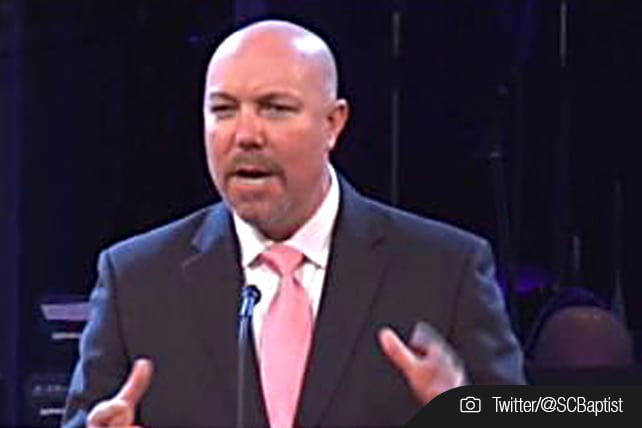 A former employee of the South Carolina Baptist Convention and International Mission Board has been charged in Texas with sexually assaulting a teenager 21 years ago. Mark Aderholt was charged with the sexual assault of a child under 17, according to the Fort Worth Star-Telegram. He was arrested on July 3 and released on bond on July 9.

Southwestern Baptist Theological Seminary confirmed to Baptist Press that Aderholt was a student at the seminary when the crime allegedly was committed. He graduated in 2000 with a master of divinity degree.

Sgt. Karen Standback, an Arlington police spokeswoman, told the Star-Telegram that she could not release information about the case.

Aderholt resigned as the associate executive director and chief strategist for the South Carolina Baptist Convention (SCBC) on June 19. The SCBC released a statement announcing Aderholt had resigned after a year and a half and that SCBC executive director Gary Hollingsworth received the resignation with “a heavy heart.” The initial statement did not, however, give a reason for the resignation.

He previously served several months as interim pastor for the Lakeside Fellowship Church in Roanoke, Virginia, now known as Freedom Fellowship of Roanoke, according to the church’s website. During that time, his wife, Kristi, served as children’s minister for the same church.

Aderholt also formerly served as the missionary to Eastern Europe for the International Mission Board (IMB), an organization affiliated with the Southern Baptist Convention. He’s cited as having served in Bulgaria and Slovakia, among others. In 2000, Aderholt and his wife were appointed as missionaries to the Central and Eastern Europe region.

Baptist Press reported that the IMB learned about the charges against him from the Star-Telegram’s July 9 report. IMB spokesperson Julie McGowan told BP, “It is our policy to cooperate with criminal investigations.”

McGowan said in written comments to BP that “IMB has a zero-tolerance policy against sexual misconduct that is shared with all personnel. If anyone has knowledge of a case involving sexual misconduct, we strongly encourage them to come forward, and we provide multiple avenues for them to report. When we are informed of possible cases of sexual misconduct of any kind, we investigate those situations immediately and, if warranted, take the appropriate action to report it to local authorities and remove individuals from IMB employment.”