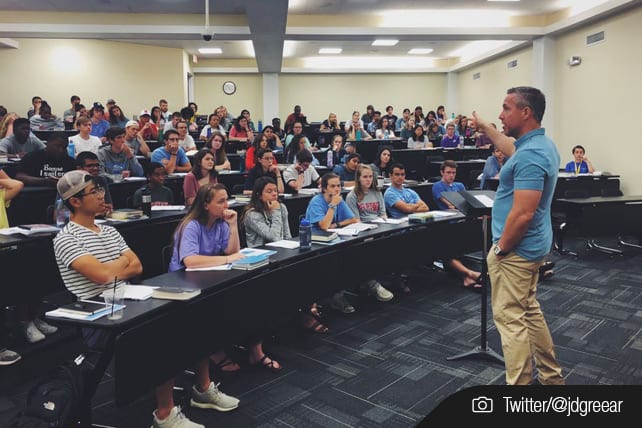 After his election win to take the role of President of the Southern Baptist Convention, all eyes have been on J.D. Greear. Greear, the pastor of The Summit church in North Carolina, will have to make weighty decisions on behalf of the largest Protestant organization in the United States over the next year. One group in particular is asking how he will respond to the growing #ChurchToo movement that has knocked on the SBC’s collective door of late.

A Meeting With Summit Church Leadership

Outside this year’s annual convention in June, a group of determined advocates gathered to draw attention to the problem of abuse being swept under the rug in the church. Ashley Easter of the #ForSuchATimeAsThis Rally says next year the group would like to be offered a seat at the SBC’s table instead of having to gather outside its doors.

This is precisely why Easter, along with Pastor Ian McPherson, traveled to Greear’s office at the Summit Church in Raleigh, North Carolina, on July 11, 2018. Hoping to speak directly to Greear, the pair were instead met by Greear’s associate pastor and right hand, Todd Unzicker. When ChurchLeaders spoke to Easter after the meeting, she did not indicate she took Unzicker’s presence as a slight from Greear. Rather, Easter felt the tone of the meeting was “favorable” and felt as if Unzicker understood the issue of abuse in the church is a problem that needs to be addressed. He also indicated collaboration between the organizers of the rally and the leadership of the SBC may be possible.

What Was on the Agenda of the Meeting?

Goal #1 – Women to be respected and honored within the churches of the SBC.
Goal #2 – Establishment of a clergy abuse offender database for the SBC.
Goal #3 – Best practices training of all pastors and seminarians on the issues of handling domestic abuse or sexual assault disclosure or incidents.

The rest of the meeting was spent discussing how the organizers and the SBC might work together to accomplish these goals, including a timeline for seeing them accomplished. Easter had two specific asks of Greear’s staff at this initial meeting. The first was asking Greear to create an Abuse Task Force whose assignment will be to present a curriculum for churches to use in training leadership “for the eventual domestic abuse or sexual abuse disclosures that will occur.” Secondly, Easter requested a follow up meeting in a month or two, at which time she would like to present a suggested task force, project plan, and schedule and agenda for meetings.

At that follow up meeting, Easter will be suggesting some people to man the task force. She is currently in conversation with a handful of people with experience helping victims of abuse about the prospect.

How Will Greear and the SBC Respond?

While Easter sounds cautiously hopeful about the start of what could be a collaborative relationship with the SBC, she’s not sounding the victory bell just yet. She’s seen leaders agree with her during a meeting but fail to follow up on the necessary steps. For his part, Unzicker did mention the obstacles the group would face in implementing these changes in the SBC.

It remains to be seen how Greear and his staff will respond to these requests. We do know, however, that the issues of abuses of power and sexual sin that have come to light recently in the SBC have been on Greear’s mind. In May, Greear posted a video to his Facebook page expressing his belief that judgment had come to the Lord’s house—namely the SBC.

The bigger the ship, the harder it is to turn, as the saying goes. The SBC may have a particular challenge in adjusting the way they view and treat women. This change would likely become easier if they equipped more women to lead and make decisions on behalf of the denomination, as leaders such as Dwight McKissic have suggested.