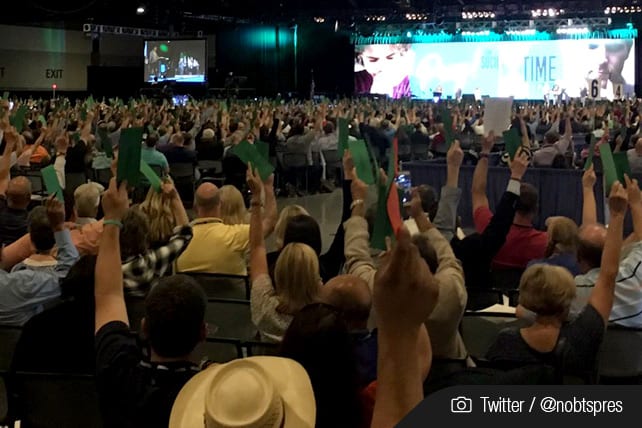 You can find plenty of blues down on Bourbon Street in the French Quarter of New Orleans. Now you can also find the blues across town at the New Orleans Baptist Theological Seminary.

NOBTS president Dr. Chuck Kelly told students and faculty during a chapel address on August 21 that “Southern Baptists have the blues” and “the future is unclear” for the largest Protestant denomination in the United States.

“The tone after Dallas in 2018 was very, very different. As different as different could be. There was not triumph and excitement. There was not anger or frustration. There was a bewildering confusion over Southern Baptists behaving differently,” he said, reading from his personal journal.

The “Baptist blues,” he said, stem from “unprecedented circumstances” including moral indiscretion and the termination of Dr. Paige Patterson, the former president of Southwestern Baptist Theological Seminary, after he failed to investigate and report two separate rape allegations by female students.

But he also senses uneasiness between older, traditionalist Southern Baptists and the rising young and theologically Reformed.

“One final ingredient I should mention has been mixed into the jumble of all these unprecedented actions. Completely different, completely unrelated. And that is the increasing tensions over the advance of Calvinism in the SBC, bubbled over a bit in the SBC presidential election at that Dallas Convention,” Kelley said.

“Although neither nominee promoted the election as such, the election became in the eyes of many a choice between younger, Reformed leadership or older, traditional Baptist leadership. The younger, reformed candidate won, adding to the concern of many on the future of the traditional convention emphasis on evangelism and missions and the traditional theological focus on the Bible as the centerpiece of theological conversation and discussion,” he added.

17 Years of Decline for Southern Baptists

And perhaps most depressing of all is the steady decline in membership and baptisms.

Kelley explained that since 2009 the SBC planted 871 new churches. But since 2009, 772 Southern Baptist-affiliated churches either closed their doors or disassociated from the convention. “Where is the fruitfulness in evangelism that Southern Baptists became so accustomed to?” he asked.

He added, “It would have been one thing if our only decline was in that single area of baptisms. But it’s worse than that. For most of the last decade, the SBC has been declining year after year in membership, worship attendance, and Sunday school, Bible study, small group…the typical common churches of the SBC are struggling on an unprecedented scale.”

There are some silver linings among the dark clouds.

Many SBC church plants in urban areas are doing well. The North American Mission Board reported to the 2018 Dallas convention that SBC church plants baptize at a 67 percent better attendee-to-baptism ratio when compared to traditionally established churches.

And Baptist Press also reported that nearly twice as many representatives, called messengers, attended the 2018 convention than the previous year. Of the demographics gathered, 35 percent reported being first-time attendees and an encouraging increased number of messengers, 25.2 percent, were between 18 and 39 years of age.