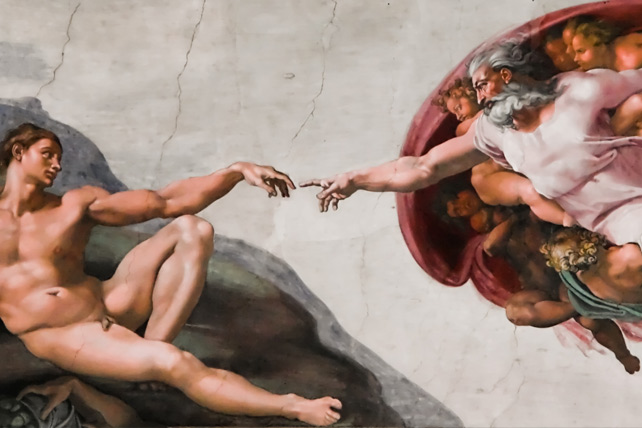 After a U.K. survey found that only 1 percent of British Christians consider God to be female, some Church of England leaders are urging clergy to consider their word usage. According to research conducted by YouGov, younger Christians are now more likely than older Christians to view God as male.

The survey is a reminder that it’s important to be “mindful of our language” in worship settings, says the Rt. Rev. Rachel Treweek, the first female diocesan bishop in the Church of England. “I don’t want young girls or young boys to hear us constantly refer to God as he,” she tells the Telegraph.

Describing God with only male-focused language might alienate some people—including non-Christians—from the church, Treweek warns. For her, it’s a matter of context: “Whether…you go to a website and you see pictures of all white people, or whether you go to a website and see the use of ‘he’ when we could use ‘god,’ all of those things are giving subconscious messages to people.”

Is God Male? Or Female? Or Neither?

Language used in churches should mirror the more gender-balanced language now used throughout society, says the Rt. Rev. Dr. Jo Bailey Wells. Her solution is to use “both male and female imagery” and to “[avoid] the need to say ‘his’ or ‘him’ too often”—while not completely abandoning male pronouns.

Rev. Sally Hitchener, Anglican chaplain at Brunel University, goes further, calling it “heretical” to label God as male only. “No academic theologian in the U.K. would objectively say that God is male,” she says, “and yet that is the common parlance in a lot of the church and definitely the message that is coming across in lots of the media communications that we’re sending.”

The survey results reflect a culture in which “sex identity is ever-present,” says the Rev. Dr. Ian Paul, a member of the Archbishops’ Council. “It makes it increasingly hard for young people to think of personal being without thinking of sex identity, and so if God is the ultimate ‘person,’ then God must be…male or female,” he said. “This view contradicts orthodox Christian teaching, but many young people don’t have enough contact with the church for actual Christian teaching to counter the thinking they pick up from culture.”

Last year, the Church of Sweden took flak for suggesting in a handbook that clergy refrain from calling God “He” or “the Lord.” Church officials insisted they were merely offering alternative phrasing, including the gender-neutral “In the name of the triune God.” Archbishop Antje Jackelen said, “Theologically, for instance, we know that God is beyond our gender determinations. God is not human.” But theology professor Christer Pahlmblad harshly criticized the guidelines, calling them an effort to “replace 2,000 years of theology.”

In July, the Episcopal Church started exploring ways to revise the Book of Common Prayer, making the language more gender neutral. Some clergy believe that male-only language for God makes it difficult to reach young people with the Gospel. Kathleen Moore, a seminarian in Vermont, says gender-focused language is an obstacle—and that we should “let God be God.” Revising the prayer book is tied to the Episcopal Church’s constitution, so any revisions wouldn’t be approved until the year 2030.

In America, the terms “gender inclusive,” “gender neutral,” and “gender accurate” often obscure debates about how pronouns are used in Bibles. At Duke and Vanderbilt Universities, divinity school professors have been asked to “mitigate sexism” by using more inclusive language.

The Limits of Human Wording

As a human construct, language falls far short in its ability to describe the Deity, the great I AM.