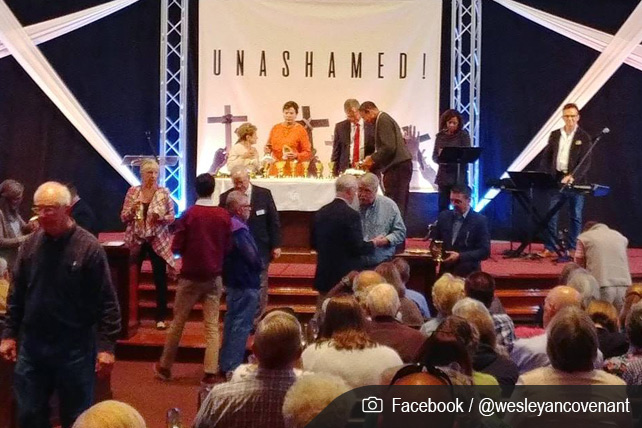 The charismatic arm of the United Methodist Church, the Wesleyan Covenant Association, is making a plan to continue to operate out from under the UMC. Whether the WCA will end up using this contingency plan depends on how the vote will go in February concerning the denomination’s position on homosexuality.

“The adoption of the One Church Plan, with the changing of the definition of marriage and the changing of ordination standards, would be untenable and would force us to lead in the formation of a new expression of connectional Methodism,” a statement from the WCA reads. In other words, if the UMC adopts a plan that will significantly alter its historical stance on homosexuality, the WCA will leave.

A group of 2,500 WCA members met at Mt. Bethel United Methodist Church in Marietta, Georgia on November 2nd and 3rd and passed four resolutions. Delegates representing 125,000 people in 1,500 churches convened at the WCA’s first global legislative assembly. Those in the WCA appear to be of one mind concerning the UMC’s ongoing debate on how to handle homosexuality in the church.

Under The One Church Plan, the statement that says homosexuality “is incompatible with Christian teaching” would be removed from the United Methodist Book of Discipline. Additionally, the plan would place the decision to perform same-sex weddings up to individual churches and the decision of gay ordination up to annual conferences. The One Church Plan is the plan, among a few options, that the UMC’s Council of Bishops recommends.

What the Wesleyan Covenant Association Wants for the UMC

In contrast to the Council of Bishops’ consensus, the WCA is in favor of The Traditional Plan with some modifications submitted by Dr. Maxie Dunnam. “The Traditional Plan with modifications is in accord with the teachings of Scripture, tradition, reason, and experience. It alone provides measures to uphold the UM Church’s discipline and polity, supports the perspective of the majority of the global church, and is generous in its provision towards individuals, local churches, and annual conferences that can no longer abide by it,” a statement from the WCA reads. The group is encouraging UMC delegates to vote for this plan come February at the General Conference.

The WCA is also pushing for a “gracious exit” option to be extended to congregations that wish to exit the UMC following whatever decision is made at the General Conference in February. The WCA advocates such congregations should be allowed to keep their property and assets while funding its “proportionate share of unfunded pension liabilities within its annual conference” and continuing to pay off any outstanding loans it may have with the UMC. In other words, dissenting congregations should be given every opportunity to “thrive in a new ministry reality.” Additionally, with Dr. Dunnam’s modifications, an annual conference wishing to exit the denomination would also be given a $200,000 grant to help pay for transitional expenses.

The Plan Most International Methodists Embrace

The Traditional Plan is arguably the one most United Methodists across the globe endorse. Delegates from African nations, Korea, and Russia were present at the WCA meeting. South Congo Area Bishop Kasap Owan said “Africa will not walk away from Christ. If you bring us another teaching on marriage, our churches will be empty. But if you are faithful to the word of God, the church will grow.”

“Jesus was protected in Africa,” Owan said. “Africa will remain the place to protect the Gospel.”

On its website, the WCA says it “connects Spirit-filled, orthodox churches of Wesleyan theology and their members.” At the meeting this weekend, the Rev. Madeline Carassco-Henners said the DNA of the Wesleyan movement encompassed the “charismatic nature of revival that even shocked Wesley.”

Whatever the outcome of the vote in February, the WCA is gearing up for changes. Whether they will remain in the denomination or begin the work to gracefully exit, they are determined to practice Christianity as they believe God would have them. Even if they have to form a new denomination, they will continue to follow the principles of Wesleyanism and traditional marriage.

The WCA’s announcement comes on the heels of a large UMC congregation announcing it will leave the UMC, regardless of how the vote in February goes.