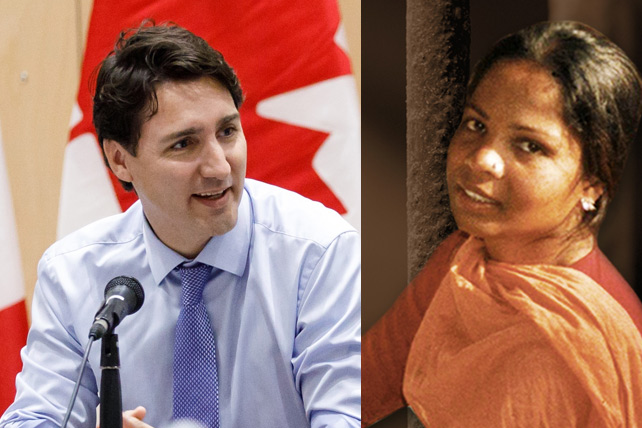 Asia Bibi, the Christian Pakistani mother recently acquitted of a death sentence for blasphemy charges, remains in protective custody after an extremist Muslim group struck a deal with the Pakistani government to appeal the acquittal decision. Bibi has been moved to an undisclosed location, but she is not permitted to leave the country. Now, Canada’s Prime Minister Justin Trudeau has indicated the country he represents is trying to work out an offer of asylum for Bibi with the Pakistani government.

“There is a delicate domestic context that we respect which is why I don’t want to say any more about that, but I will remind people Canada is a welcoming country,” Trudeau told Agence France-Presse while in France on Monday, November 12, 2018.

It’s clear the Pakistani government wishes to let Bibi go, but they fear the uprising of extremist Muslims who wish Bibi to be killed for her alleged blasphemy. According to this extremist group, Bibi insulted the prophet Muhammad, which is a crime punishable by death in Pakistan. This group has called for the deaths of the judges involved in Bibi’s case, as well as anyone who has sided with the mother of five. Two government officials have already been killed following their support of Bibi. The lawyer who represented (and is still representing her) has fled the country.

Writing in Daily Pakistan, journalist Ahmed Quraishi described the situation with the extremists this way:

The extremists are more emboldened today than at any other time since 9/11. They refuse to accept the possibility that someone can be acquitted after being charged with blasphemy, and feel executing Asia Bibi is the only option. Either this or someone kills her extrajudicially like the 60 other Pakistanis accused of blasphemy and murdered before trial in recent years. At the heart of this debate is paranoia among Pakistani extremists that Islam is under threat and the misperception that foreign pressure protects those who commit blasphemy.

Quraishi is confident the appeal will not overturn Bibi’s acquittal, calling the Supreme Court’s decision “irrevocable, based on facts.” The journalist goes on to note that the extremists’ view that is paranoid about blasphemy is not the predominant view among Pakistani Muslims. He also notes thus far that Bibi’s case has not stirred up other Muslims outside of Pakistan.

However, some countries, like Great Britain, are not offering Bibi asylum precisely because they fear potential retribution from some within their borders. “Britain was concerned about potential unrest in the country, attacks on embassies and civilians,” Wilson Chowdhry of the British Pakistani Christian Association said. Chowdhry said, “It does seem to me that Britain is now a country that is unsafe for those who may be tarred with an allegation of blasphemy. We are very aware that there are extremist elements in this country.”

According to the BBC, Bibi’s husband, Ashiq Masih, has appealed to Great Britain, the United States and Canada to offer his family asylum. Masih recorded a video of himself appealing to U.S. President Donald Trump and Great Britain’s Prime Minister Theresa May for help.

Speaking to Deutsche Welle, Masih said he is in constant fear for the safety of his family. “The current situation is very dangerous for us. We have no security and are hiding here and there, frequently changing our location. I think that the clerics will encircle the Supreme Court on the day of the hearing. I really feel very afraid of going on that day. But I think God has been protecting us and he will also continue to protect us. I place all my trust in God,” he said.