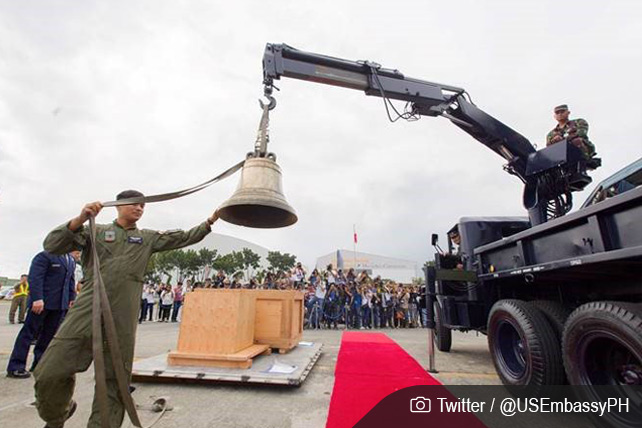 More than 100 years after the United States confiscated three bells from a church in the town of Balangiga in the Philippines, the U.S. has finally returned them.

Defense Secretary James Mattis said, “By returning the bells of Balangiga to our ally and our friend, the Philippines, we pick up our generation’s responsibility to deepen the respect between our people.”

Spain was the colonial ruler of the Philippines before handing over rule to the U.S. in 1898 following the Spanish-American War. Filipino nationalists rebelled against the United States, beginning the Philippine-American War. This war occurred from 1899-1902 and took a heavy toll on soldiers on both sides of the conflict, as well as on civilians.

In 1901, fighters from the town of Balangiga surprised a company of American soldiers while they were eating breakfast. The natives signaled the beginning of their attack by ringing the bells of St. Lawrence the Martyr Church. Forty-eight Americans (two-thirds of the company) died.

The American response was brutal. Gen. Jacob Smith ordered American troops to kill any weapon-bearing Filipino male over the age of 10. While it’s uncertain whether Americans followed through on these orders to kill civilians and children, what does appear clear is that the soldiers destroyed the village of Balangiga, including crops and animals. The result was the “massive devastation of the rural economic base” in Balangiga. And Americans confiscated three of the church’s bells as war trophies.

While some U.S. veterans have resisted returning the bells to the Philippines, retired U.S. Navy Capt. Dennis Wright argues that returning them is the right thing to do. He sees no compelling reason to continue holding the bells, plus there is a precedent for the U.S. returning bells to other countries, such as Japan and Russia. The U.S. has already returned the San Pedro bell, another bell Americans took from the Philippines during the Philippine-American War.

Says Wright, “[The Balangiga bells] are about the only bells that people didn’t want to relinquish. But church bells belong in churches calling the faithful to worship. They don’t commemorate military deeds.”

“They Represent Our Faith”

The United States has already delivered the bells to Manila on an Air Force plane called the The Spirit of MacArthur. This was a deliberate nod to the fact that during WWII, Gen. MacArthur set the Philippines free from Japanese occupation.

Because the belfry of the church cannot currently accommodate the bells, those handling their return will temporarily place them in the garden area of the church. The diocese taking care of the bells said, “Please be assured that we will return the bells to their original religious purpose—and care and cherish them as a precious legacy of the profound faith, heroism and courage of our forebears.”

The formal turnover of the bells will take place in Balangiga on Dec. 15th.