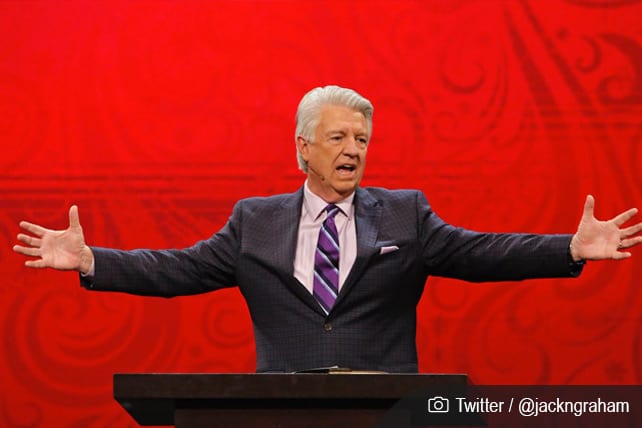 Jack Graham, pastor of a Baptist megachurch and former president of the Southern Baptist Convention, spoke out against a controversial Texas bill that would have allowed abortion-seekers to be charged with homicide.

Graham, a member of President Trump’s religious advisory board, is pastor of the 42,000-member Prestonwood Baptist Church in Plano, Texas. One of his church members, Texas Republican House Chairman Jeff Leach, recently rejected House Bill 896, which could have subjected women to the death penalty for having abortions. Leach, who’s pro-life, says he remains committed to the cause but that this legislation would have moved Texas “and the pro-life cause in the wrong direction.”

After Leach killed the legislation, Graham tweeted: “I support @leachfortexas 1000 percent. He is a caring and courageous congressman who is leading Texas citizens with grace and truth.”

In response, Leach tweeted: “Thank you, pastor. Blessed to have your support and to follow in your footsteps boldly fighting for life and serving & meeting women at the point of their need. God is doing great things and the tide is turning!”

In a May 11 Dallas Morning News column, Graham admits his support for Leach’s decision “did not sit well with everyone.” But he says as much as he’d “love to see the day when Roe v. Wade is overturned,” the so-called Abolish Abortion in Texas Act had implications that were “a far cry from pro-life.”

“As Christians we need to remember we are called to not only protect the unborn but also to walk with women through their struggle,” Graham writes. “In fact, we fail if we do not care for the mother and meet her at her point of need.”

A pregnancy center at Graham’s church has “prevented tens of thousands of abortions” since 1991, the pastor says, and during those years “we have never met a woman…who deserved to be criminally convicted of homicide.” Instead, he says, the women are often “alone, distressed and confused,” considering abortion only because “they don’t have resources or they feel pressured to do it.”

Other pro-life groups, however, had urged Leach not to kill the bill. During hearing testimony, Jim Baxa, president of West Texans for Life, said, “A woman who has committed murder should be charged with murder.”

As part of a trend of stricter state abortion legislation, Georgia recently made it illegal to have an abortion after a fetal heartbeat is detected, at about six weeks gestation. “Georgia is a state that values life,” said Governor Brian Kemp at the bill-signing. “We protect the innocent. We champion the vulnerable. We stand up and speak for those who are unable to speak for themselves.” The entertainment industry is now threatening to boycott Georgia as a result.