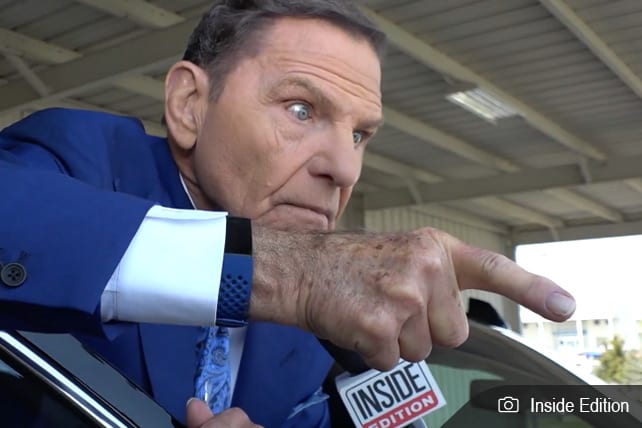 Televangelists of the prosperity persuasion are hard for your average church-goer to understand. Most of us can’t reconcile a preacher wearing $2,000 shoes while preaching, let alone a preacher who needs his own private jet. Yet, Kenneth Copeland continues to be completely unapologetic for his lavish lifestyle. In a recent interview, Copeland gleefully told a reporter he’s a “very wealthy man” and that Scripture defends his lifestyle.

“It takes a lot of money to do what we do,” televangelist Kenneth Copeland told a reporter who caught him getting into a vehicle in Branson, Missouri.

Copeland claims his ministry has brought 122 million people to believe in the Lord Jesus Christ. He made sure Lisa Guerrero with Inside Edition heard this number.

All this soul-winning would not be possible without the ability to travel using private jets, he explains. Besides, Tyler Perry “made that airplane so cheap for me, I couldn’t help but buy it,” Copeland says with a smile, referring to the Gulfstream 5 jet that he recently bought.

“No, I do not. And don’t you ever say I did,” he said, pointing his finger rather menacingly in Guerrero’s face. “It’s a biblical thing, a spiritual thing. It doesn’t have anything to do with people.” Copeland then paraphrased Ephesians 6:12, which talks about wrestling with “principalities, powers, and the rulers of darkness and not against “flesh and blood.”

Some people are alcoholics, who fly commercial he explained. “Do you think that’s a good place for a preacher to be and prepare to go preach to a lot of people?”

“So you don’t want to be around a bunch of sinful people, is that what you’re saying?” Guerrero asked.

Have Fancy Clothes, Will Preach?

Copeland’s ministry owns two airplanes that they “use all the time.” And one other small one, he said as an aside. Inside Edition reports Copeland also has an airport next to his mansion in Newark, Texas.

“I could no longer do what I’m called to do and be on the airlines. Besides that, I need my clothes when I get there.”

“You have some very fancy clothes,” Guerrero says. Copeland did not deny it. In fact, he looked gleeful as he said “Yes I do. I’m a very wealthy man.” He also admitted to using his private jets to visit his vacation homes, one of which is located in Steamboat Springs, Colorado.

But, he argues, his wealth doesn’t come from offerings alone. He sells books and resources to his followers. Plus “I have a lot of natural gas on my property,” he says with a wide grin.