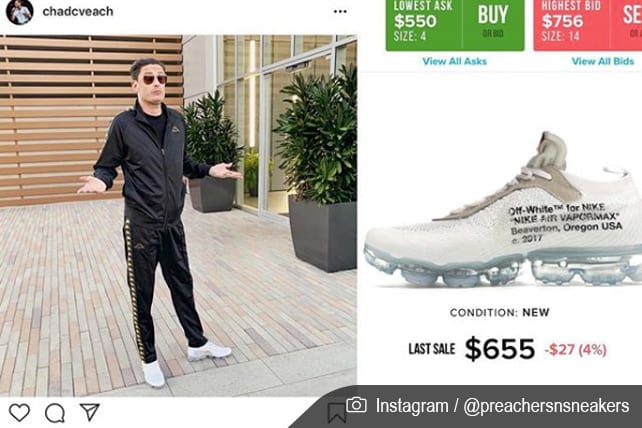 A new Instagram account is generating a lot of discussion about pastors, finances and stewardship. The account, PreachersNSneakers, started as a joke and was created by an anonymous self-described evangelical Christian who also dabbles in buying and reselling sneakers. Joke or not, the account featuring images of high profile pastors wearing expensive name brand shoes and other accessories has a lot of Christians talking.

“I’m not trying to cause a division…I just think that if you’re in church you should know how your pastor is spending the money,” the creator of the account told Fashionista.com.

What Prompted All This Attention on Pastors’ Footwear?

The creator, who Fashionista refers to by the pseudonym Tyler Jones, claims he started the account a few weeks ago mainly as a joke. While looking up a song by Elevation Worship, Jones noticed the worship leader was wearing a pair of Yeezy 750s, which Jones says resell for around $800. Familiar with the average church-workers salary (Jones’ wife works at a church), he was shocked by what he was seeing. A little more digging led him to Elevation’s lead pastor, Steven Furtick, who has also been known to don flashy shoes.

A post shared by PreachersNSneakers (@preachersnsneakers) on Mar 25, 2019 at 1:20pm PDT

Jones says he isn’t necessarily trying to call particular pastors out on their clothing choices or spending habits. “All I do is find pictures, look up the things that they’re wearing and then put out the current market price and let you decide what you feel about that, you know?” Jones says. Jones uses a site called StockX which tracks what the market is willing to pay for a new pair of particular shoes.

The response to Jones’ account has been impressive. In just about three weeks, he’s garnered over 111,000 followers and scores of comments which range from vitriolic to praise for his efforts.

I’ve had hundreds of pastors and people in ministry message me like, ‘Thank you, keep doing what you’re doing. It’s prompting a discussion around what leadership and stewardship look like within the church.’ I also have this whole other component of the secular, questioning or atheist community that are messaging me like, ‘Dude, this is hilarious. It’s crazy the money that these preachers make.’

Somebody called me a hypocrite today and said that I was causing disunity within the church. But I’ve been pretty intentional to leave it relatively open-ended. It can be read passive-aggressively or it can be read like, ‘Oh this dude’s just gassing this pastor up for having a sweet outfit.’ I had a Dallas-based pastor reach out to me and ask to be featured on the page yesterday.

Who Has Been Featured on PreachersNSneakers?

Pictures of Chad Veach, pastor of Zoe Church in Los Angeles, show up on PreachersNSneakers more than pictures of any other pastor. One of Jones’ early posts featuring Veach actually caused a stir that led to Veach changing his Instagram handle. Jones had tagged Veach in the post, who commented: “Wanna know what’s crazy? I legit did not pay for one thing i am wearing. Is that wild to you? that’s wild to me… Thanks for the shout out tho. You’re a blessing.” Shortly afterward, Veach deleted his comment and changed his account handle.

Celebrating my 500th “hey man what’s the purpose of this account?” DM with the brotein shake himself, @chadcveach in quite possibly the coldest workday fit of em all

A post shared by PreachersNSneakers (@preachersnsneakers) on Apr 2, 2019 at 9:59am PDT

This post prompted the comment “There’s a lot of money in the God business.” Another comment on a similar post featuring Veach reads “Chad taught me how to read the Bible when I was 14. Your account in [sic] attention hungry – sad vibes.”

The wives of famous pastors show up too, including Chelsea Smith, Natalie Todd and Julia Veach.

As much as he defers judgment on these pastors, in the phone interview with Fashionista, Jones does indicate he believes these pastors have some explaining to do. Personally, he says he would “be a little irritated” if his pastor wore expensive shoes. On the other hand, he doesn’t think one should base a decision on where to attend church solely on what the pastor is wearing.