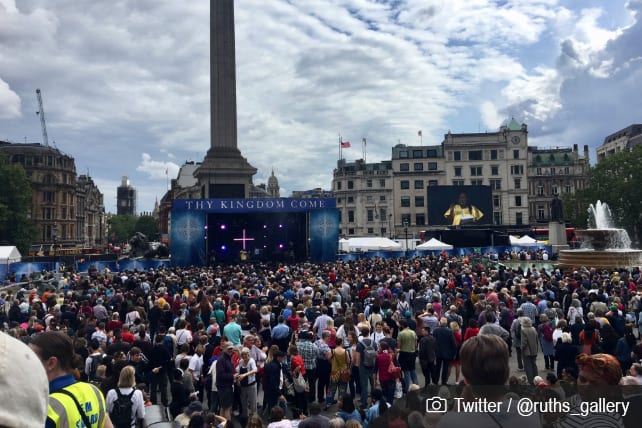 Trafalgar Square in London was transformed into a sanctuary this Sunday as an estimated 7,000 to 10,000 people gathered for a special Pentecost event. The ecumenical gathering, which featured messages from top leaders of the Christian community in England, music by popular Christian artists, and a time of prayer, was the culmination of a concerted prayer event called Thy Kingdom Come. A major emphasis of the event was on evangelism.

“For those who say the Church is dead, Trafalgar Square was amazing. If this was a business strategy, we could not do anything close to what [Thy Kingdom Come] has done over the last three years.” Reverend Barry Hill, Team Rector of the Harborough Team Ministry and a Thy Kingdom Come board member, told reporters.

Only in its third year, people in 114 countries and 65 denominations indicated they would participate in the event. Thy Kingdom Come is a global prayer movement which encourages believers to come together and pray during the 10 days between Ascension and Pentecost. The idea takes its cue from the book of Acts, where we are told the disciples gathered after Jesus ascended into heaven to pray for the Holy Spirit to come.

A strong emphasis on evangelism marks Thy Kingdom Come. Organizers encourage participants to pray for five friends “who have not responded with their ‘Yes’ to God’s call.” The Archbishop of Canterbury and head of the Church of England, Justin Welby, reminded those in attendance at the Trafalgar Square event on Sunday to think of five people and commit to pray for them “that they may know who Jesus is.” Welby also encouraged the group to be ready to evangelize, without using “religious jargon.” He admonished them: “Be able to explain in less than one minute, because people get bored, why you are a Christian.”

Another distinct marker of Thy Kingdom Come is its ecumenical nature. In addition to Welby, other heads of churches in the United Kingdom were present. Archbishop Angaelos, the Coptic Orthodox Archbishop of London, joined Welby, Cardinal Vincent Nichols of the Catholic Bishops Conference, Hugh Osgood of Churches Together England, and Agu Irukwu of Redeemed Christian Church of God UK, to lead the crowd in prayer. Rev. Hill explained the effect of so many different denominational leaders kneeling and praying together was unique. “The service wasn’t part of some imperialistic church project: it was about Christians working with society and the community,” Rev. Hill said.

At the end of Archbishop Welby’s address to the crowd, he invited those who would like to know Jesus or have met Jesus but have “begun to walk at a distance” from him, to come to speak with him. Rev. Hill said watching people come forward at the event was “not something you see every day.”

The Right Reverend Sarah Mullally, the Church of England’s Bishop of London, took some time to speak about those who serve as police officers. Mullally interviewed the Metropolitan Police Commissioner, Cressida Dick, and asked her what believers could do to help the officers who are facing rising problems such as knife crime. Dick indicated a rising division in the city was contributing to crime, especially among young people. The Commissioner said she has seen escalating division lead to things like terrorism, hate crimes, angry protests, and “sheer nastiness between people on the street.”

“Police people need inspiration, and we do need support. My officers and staff are out there now doing incredible things on the streets of London, and every now and then if someone says thank you, it makes a good difference. I would love it if people could pray for the people of the Metropolitan Police,” Dick said.

Welby also alluded to a need for a greater sense of unity among people in British society. He articulated the fact that although there was great diversity present in the crowd, “in Jesus, we’re bought to be one.” Because of the unity given by Jesus, Welby said: “We will see our society transform. We will see the despairing given hope; we will see the weak given strength; we will see those we’ve neglected and turned from loved and embraced; and we will see a change in our future. And it’s all because of Jesus.”

In addition to remarks by church leaders, the event included music from popular Christian musicians. Matt Redman graced the stage, along with the Kingdom Choir (this group performed at Prince Harry and Meghan Markle’s wedding last year), Lou Fellingham, and the band Sounds of New Wine.

While London’s event (dubbed #TrafalgarPrayer) was remarkable for the crowd it drew, it wasn’t the only city to see large crowds gather to pray. In Worcester, believers wrote prayers on pieces of paper and folded them into paper airplanes.

In Hampshire, thousands met on the grounds of Portchester Castle.

It’s truly remarkable to see prayer gatherings of such a large size, and Thy Kingdom Come is no different. Rev. Hill believes there is more to come from the movement. “There is a real desire: people have caught the vision, and God wants to call people to him,” he says.