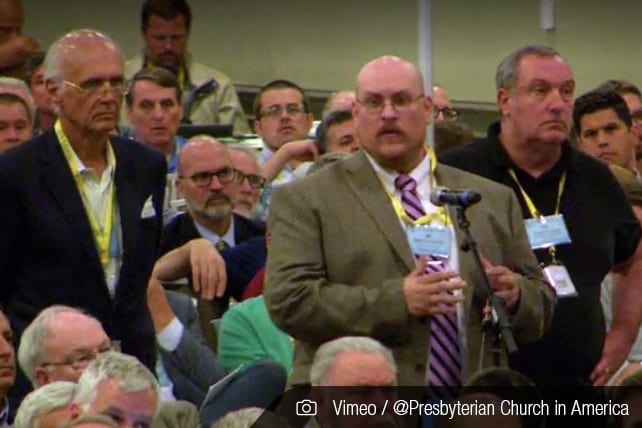 The Presbyterian Church in America (PCA) voted at its general assembly yesterday to endorse the Council of Biblical Manhood and Womanhood’s (CBMW) Nashville Statement. Overture 4 was approved by a vote of 803 to 541.

“‘The Nashville Statement,’ carefully worked out by the Council on Biblical Manhood and Womanhood in 2017, is a timely statement that speaks into the current confusion surrounding gender and sexuality within the evangelical church (including the PCA) and the broader culture,” read the overture. “Signed by many leaders within the Reformed and evangelical world, it is a balanced and biblically faithful attempt to ‘speak the truth in love’ (Eph. 4:15) on one of the most pivotal and controversial issues facing the church today.”

The document goes on to say that the Nashville Statement is biblically sound, aligns with the PCA’s “confessional understanding of marriage, gender, and sexual ethics,” and points those struggling with sexual sin to the gospel. The overture concludes, “The PCA would do well to commend ‘The Nashville Statement’ and prepare it for distribution through Committee on Discipleship Ministries.”

Christianity Today (CT) reports that there was extensive debate regarding the overture and that the voting went past midnight. You can watch the proceedings here. Notably, the PCA has recently dealt with controversy due to some of its leaders participating in the Revoice conference. Revoice, which held its first meeting in the summer of 2018, holds to a traditional view of marriage, but has generated debate through its endorsement of terms such as “gay Christian” and “sexual minority.”

The Revoice website states, “Whether individuals choose ‘gay’ or ‘same-sex-attracted’ to describe their orientation and experience is a matter of wisdom and liberty, and should not divide believers who otherwise share a commitment to historic Christian teaching about marriage and sexuality.” Critics of this viewpoint are concerned that those who use such terminology are normalizing sinful sexual desires. In contrast to Revoice’s approach, Article 7 of the Nashville Statement says, “We deny that adopting a homosexual or transgender self-conception is consistent with God’s holy purposes in creation and redemption.”

The Nashville Statement has been controversial since it came out, but The Washington Post observes the most surprising criticism has come from conservative Christians who fear that, among other things, the statement’s tone will unnecessarily alienate people. In a blog post prior to this week’s general assembly, Pastor Scott Sauls acknowledged that while the terms “gay Christian” or “sexual minority” could be used to endorse same-sex attraction, he believes they should be allowed when used to acknowledge someone’s experience of temptation.

He also questioned whether Christians are being consistent in how they describe sin: “If it’s always wrong for same-sex attracted, chaste and celibate Christians to use the word ‘gay’ to describe their experience of temptation (versus using the word as an identity marker, which would not be right), is it also wrong for others to use words like ‘alcoholic’ or ‘addict’ or ‘anxious’ or ‘insomniac’ or ‘sinner’ to describe THEIR unique feelings and the unique temptations that flow from them?”

On the other hand, many prominent Christians have endorsed the Nashville Statement, including Sam Allberry, who is same-sex attracted and has a ministry called Living Out. In a tweet, Allberry said the statement brought “much needed clarity.”

The Nashville Statement brings much needed clarity to issues where there is often silence, pain and confusion.https://t.co/MYrZOb5QAo

Rosaria Butterfield, who lived a lesbian lifestyle before accepting Christ, also signed the Nashville Statement, even though she has said that when she committed her life to Christ, she “was not converted out of homosexuality,” but “was converted out of unbelief.” Butterfield has said she signed the statement because of the importance of rejecting false teaching within the church.

Still others have said they are concerned, not with what the document says, but with how it says it. According to The Christian Post, one pastor who agrees with the Nashville Statement believes that pastors, not “Christian academics” should have written it. His reasoning is that “orthodoxy divorced from relationships can many times lead to rhetoric that hinders (not helps) us achieve our overall mission, to lead all people to Jesus.”