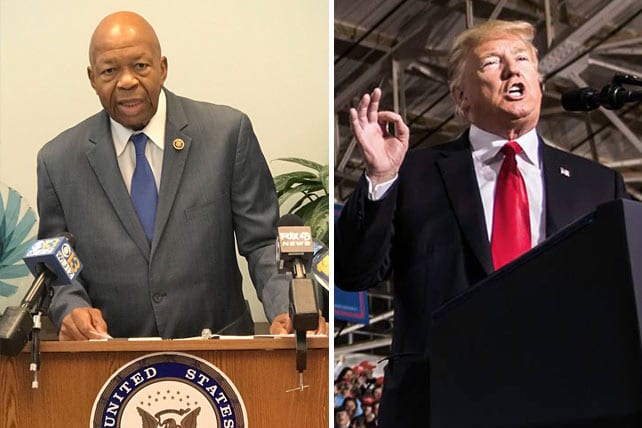 After President Donald Trump tweeted over the weekend that the Baltimore district of Rep. Elijah Cummings is a “disgusting, rat and rodent infested mess” and “no human being would want to live there,” the city’s religious and civic leaders have rallied to its defense.

Cummings, who represents Maryland’s 7th Congressional District, tweeted in response: “Mr. President, I go home to my district daily. Each morning, I wake up, and I go and fight for my neighbors.” The African-American Democrat, 68, is chairman of the House Oversight Committee.

The hashtag #WeAreBaltimore has been trending on Twitter, and the Baltimore Sun penned an editorial titled “Better to have a few rats than to be one.”

On Sunday, Rep. Cummings attended Baltimore’s New Psalmist Baptist Church, where Bishop Walter S. Thomas Sr. preached about St. Paul helping the Macedonians. “When the Holy Spirit lives in you, you see need,” he said. “You don’t tweet it.” The congregation reportedly responded with applause.

After worship, a church spokeswoman said the comment wasn’t about the Trump-Cummings Twitter controversy but that Scripture applies to everyday life. “The mark of a good sermon is that it’s relevant to a situation, even if it’s not about that situation,” she says.

Some worshipers at New Psalmist expressed dismay at Trump’s characterization of their city. Although some neighborhoods may be considered “not so nice,” says Trace Stafford, he finds a strong sense of community there. “We can’t wait for the government to change the problem,” he adds. “Just like the sermon says, we are the provision.”

On Saturday, Bishop Thomas had tweeted: “We salute repcummings for being a leader and powerful influencer in our times!! Proud of your work and your record!!! Keep it up….”

President Trump, who denies charges of racism, tweeted that he was meeting with inner-city pastors Monday afternoon. The Rev. Donte Hickman, a Baltimore pastor who’d previously invited Trump to visit the city, said he was invited to Monday’s gathering but was unavailable. His offer still stands, Hickman says: “I think it’s important for the president to engage with and really see the community of which he talks about and has talked about giving support to.”

The Rev. Dr. William J. Barber II, co-chair of Unite the Poor, tweeted: “Trump & his enablers attack Rep Cummings & Baltimore, using racism to divide & distract the nation. But look at poverty & low wealth in states w/ Senators & Representatives who support him. Poverty is the worst there & they do nothing to change it!”

Saturday evening, the Rev. Harold A. Carter Jr., pastor of Baltimore’s New Shiloh Baptist Church, tweeted: Today, the tweet(s) went too far. Growing up, we had it instilled in us that ‘you don’t mess w/ family.’ No, can’t really do anything, but ‘them’s fighting words.’”

The Rev. Jamal Bryant, who recently moved from Baltimore to Atlanta, has been retweeting news stories about the weekend spat. On Monday, as Trump’s attacks turned to the Rev. Al Sharpton, Bryant tweeted: “Dear Lord today, vindicate the victims of character assassination, rescue the redeemed from the rumor mill & compensate the courageous for being criticized.”

Bishop Talbot Swan, a pastor and fierce Trump critic, responded to threats of being reported for engaging in political activity online. He tweeted: “Tell the [IRS] that, as a racist white person, you’re mad their pastor speaks against white supremacy, racism, and anti-black bigotry and you’re dumb enough to think he’s not allowed to do so because he’s a preacher.”

Ironically, Trump stated he wished to “totally destroy” the Johnson Amendment shortly after being sworn in as President, which is the regulation that Bishop Swan alludes to in his tweet. The President has not been successful in his attempt to get rid of the amendment, which places limits on what pastors and preachers can say about political candidates from the pulpit or in official church capacities.