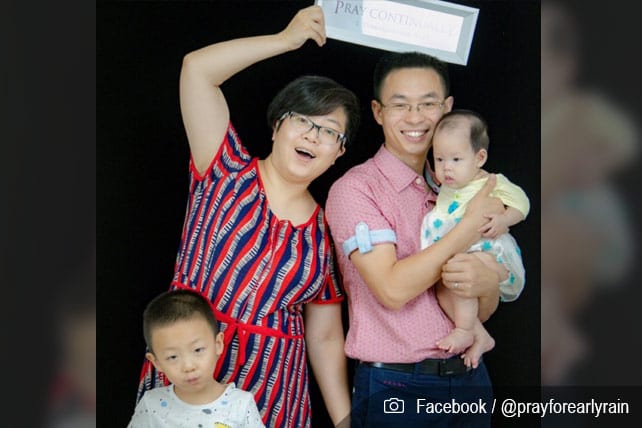 Qin Derfu, an elder with Early Rain Covenant Church (ERCC) in China, has been sentenced to four years in prison, a decision that contradicts what officials previously told his family.

“Dad and I returned home accompanied by the police,” wrote Qin’s wife, Xiao Hongliu, in a message on social media following Qin’s trial on November 25. “The prosecutor accused Qin Derfu of running an illegal business, and the lawyer defended for his innocence. Qin Derfu also testified [for himself] that it is not a crime to have [Christian] faith. We pray and look up to God for the result—justice is in His hand.”

Xiao and her father were the only two people allowed to support Qin by attending the trial early last week. According to ChinaAid, officials had told Qin that if he were willing to accept a state-assigned attorney, he would be released. Instead, as of November 29, the elder received a jail term as a consequence for conducting “illegal business operations.” This is how authorities described ERCC’s use of 20,000 Christian books, which included gospel tracts and hymnals.

ERCC pastor Wang Yi is still awaiting trial. State officials recently prohibited his lawyer, Zhang Peihong, from defending him, ostensibly because of his close connections with Wang and the church. Authorities have appointed two new, government-approved attorneys in Zhang’s place. Even though Qin has been sentenced because of ERCC’s use of Christian books, Zhang has said that Pastor Wang has taken most of the responsibility for those books. The lawyer therefore expects the pastor to receive no fewer than 10 years in prison when he is finally sentenced.

What Happened to ERCC?

It has been almost one year since December 9, 2018, when Chinese officials arrested Pastor Wang Yi and around 100 members of Early Rain Covenant Church, a house church in Chengdu, Sichuan. Some people were released at that time, but other members of the church, including Qin and Wang, remained under arrest. Pastor Wang Yi’s wife, Jiang Rong, was detained for about six months before being released in June on bail pending trial. Jiang and her son are currently under house arrest. According to ChinaAid, “They are allowed occasional contact with family, but they are not allowed to see them and even prohibited from sharing updates with others.” ChinaAid also reports that while ERCC members were detained, they experienced “forced confessions, unknown medication, and brainwashing.”

Since the initial arrests, church members who are not imprisoned have faced ongoing harassment and intimidation from authorities. These tactics include taking people’s children from them, interrogating ERCC members without warning, and repeatedly evicting them. In one church member’s account of being harassed by police, he says,

I was taken to the police station by a large number of police officers at the end of February this year for holding a gathering at my home to worship God on the Lord’s Day. My wife and I were each detained for half a month. Don’t our laws say that we have freedom of religion? Since then, we have been followed and have lost our freedom. They have even been trying to force us to move. I cannot remember how many times they (police, community monitors, and subdistrict officers) have filled the lock on our front door with glue.

These are just some of the many human rights abuses the Chinese government is increasingly committing. Officials in Zhejiang province are now prohibiting churches from baptizing people, collecting offerings, and having their own bank accounts. Churches must also report to the government about their locations, meeting times and number of attendees. What’s more, Chinese authorities are using facial recognition technology to gather information about people in China, including tracking their church attendance. The government is even requiring phone companies to collect facial scans when people buy new cell phones. Some Christians have taken to wrapping their phones in aluminum foil to prevent authorities from monitoring them.

These are compelling reminders for us to pray for the members of ERCC and all persecuted believers throughout the world. In a farewell letter, Pastor Wang Yi wrote, “In this war, in Xinjiang, in Shanghai, in Beijing, in Chengdu, the rulers have chosen an enemy that can never be imprisoned—the soul of man. Therefore they are doomed to lose this war.”