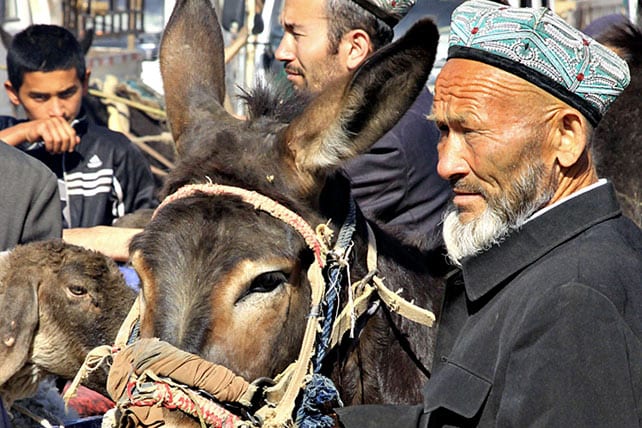 If you think the modern-day police state faded with the demise of the Soviet Union, think again—political brainwashing and torture like that depicted in Orwell’s 1984 are alive and well in China. The state is oppressing ethnic minorities who reside in China’s Xinjiang Uighur Autonomous Region (XUAR), detaining people for offenses that include having “extremist thoughts.”

“My father is an ordinary citizen,” said one Kazakh student whose father has gone missing in the region. She told Amnesty International, “We were a happy family before he was detained. We laughed together. We can’t laugh any more, and we can’t sleep at night. We live in fear every day.”

Thoughtcrime and the Uighur Population

In May, NPR published an article called “Reporter’s Notebook: Uighurs Held For ‘Extremist Thoughts’ They Didn’t Know They Had.” The article describes a government-sponsored media tour of a facility where 24 Uighurs are being detained and “re-educated.” Authorities presented this so-called re-education to journalists as positively as possible, saying they are treating the detainees well and giving them freedom to see their families on the weekends. One official said, “People here have been infected…The government wants to save and educate them, converting them here at this center.”

There is compelling evidence, however, that the estimated million people who have been detained in the region are being brainwashed, and in some cases, tortured. One woman detained at the center told NPR, “I have serious extremist thoughts. I made my children participate in religious activities from a young age. And I didn’t let them sing and dance in a cultural entertainment activity. I interfered with their personal freedom.” She has been held for 10 months and does not know when she will be able to leave.

The woman’s regret over her “extremist thoughts” was a sentiment expressed by almost every Uighur detainee NPR interviewed. Those held at the camp were arrested for a variety of offenses that include allegedly viewing videos of Osama bin Laden training members of al-Qaida, returning welfare checks to the government, and not letting their children watch cartoons. None of them realized before being detained that their actions were illegal.

When asked why it is fair to arrest people for “extremist thoughts” prior to them understanding what that means, one Chinese official explained the government’s actions are justified because the goal is to prevent many people from dying as the result of terrorism.

According to NPR, a Kazakh human rights group called Atajurt has been gathering stories from family members of the people who have been arrested. Atajurt has accumulated over 1,000 testimonies, and the group’s director says, “These so-called study centers are prisons. They’re hell.” Rights groups are calling the government’s actions a “campaign of cultural genocide.”

NPR interviewed a man named Kayrat Samarkand, whom police detained when he returned to China after working in Kazakhstan for eight years. Samarkand was interrogated and then transferred to a camp, where he remained for months. He and other detainees say that at the camps, they were required to memorize so-called “lies” of religion and sing patriotic songs before being allowed to eat meals. What happened to Samarkand is like something lifted directly out of 1984. Frustrated that a guard was repeatedly messing up his bed and ordering him to remake it, he threw his mattress at the guard. Authorities then tortured him by making him wear a suit of metal that weighed more than 50 pounds and compelled him to stand in an unbearably painful position. Samarkand said, “After 12 hours, I became so soft, quiet and lawful.” From then on, he complied with everything they asked him to do.

How Did This Begin?

The director of the Uighur language service at Radio Free Asia in Washington, D.C. told NPR that the government’s persecution of the Uighars “came out of the blue.” While some think the state is attempting to eliminate ethnic minorities, others believe political leaders are taking extreme measures in order to prevent terrorism, as the previously-mentioned official stated. The crackdown in XUAR started after a series of terrorist attacks in 2016 that were attributed to Uighur separatists. Following the attacks, Xi Jinping installed a new party secretary over the region. The new secretary, says NPR, has “transformed the region into one of the world’s most tightly controlled police states.”

According to Amnesty, 2018 saw a significant rise in the number of Uighur people being detained, surveilled and propagandized. People can be arrested for offenses that include wearing a headscarf, avoiding alcohol, travelling abroad, and having contact with people outside of China. Amnesty says, “The ubiquitous security checks that are now a routine part of daily life for all in the XUAR provide ample opportunity to search mobile phones for suspicious content or check people’s identities using facial recognition software.”

Religious rights advocates recently expressed concern about the role American tech companies are playing in facilitating China’s oppression of the Uighurs. The Coalition to Advance Religious Freedom in China wrote a letter to businesses in Silicon Valley, petitioning them not to be complicit in China’s modern day human rights violations. The letter specifically mentioned the government’s surveillance tactics and use of facial recognition technology.

They ‘have to believe’ It Works

Researcher Adrian Zenz says that indoctrination is a logical step for a government trying to find a way to control people beyond surveillance and brute force. It’s also a logical strategy for a philosophy inherently hostile to religion. He says,

Communism has always tried to create a new person that’s no longer affected by the opium of religion. On some level, therefore, they have to believe that re-education and changing people works, because if they don’t, they basically have to admit the possibility that something like religious belief could be stronger than Communist belief.