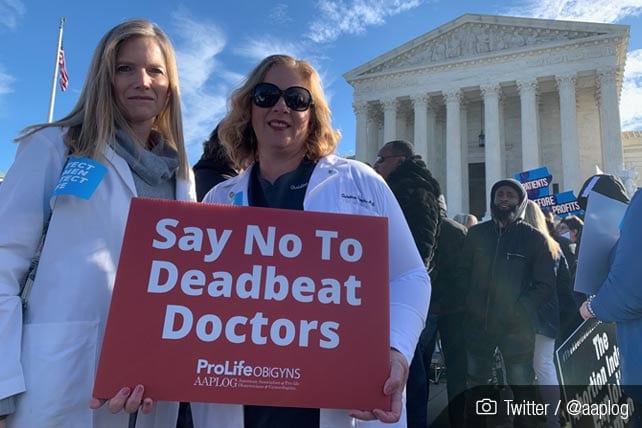 Today, the U.S. Supreme Court heard arguments pertaining to a Louisiana law that would require doctors to have admitting privileges at local hospitals. This is the first significant abortion case the court has considered since the appointments of Justices Brett Kavanaugh and Neil Gorsuch.

“The case is very likely to yield an unusually telling decision,” wrote Adam Liptak with the New York Times, “one that could reshape the constitutional principles governing abortion rights and ripple through the presidential campaign as it enters its final stages.”

In 2014, the state of Louisiana passed a law that said:

The bill stipulates doctors must be physically present when drugs or chemicals inducing abortions are administered. Doctors must also report abortions, as well as any complications that arise from them, to the Department of Health and Hospitals.

The Advocate reports that Louisiana’s bill was approved by “an overwhelming bipartisan majority” and that it was authored by pro-life state Senator Katrina Jackson, who is a Democrat. Said Jackson, “In Louisiana, we’ve come to a point where it doesn’t matter if you are black or white, Democrat or Republican, male or female, we’re going to stand together in many areas—one of those areas is women’s health.” The bill’s opponents, however, argue it actually threatens women’s health. They are concerned that, if the law goes to go into effect, only two doctors in the state of Louisiana will legally be able to perform abortions.

A Federal District Court judge struck down Louisiana’s law in 2017, saying that doctors are often refused admitting privileges for reasons having nothing to do with their capabilities. NPR reports that before the law passed, abortion providers had “transfer privileges,” meaning they could transfer patients to a hospital if necessary.

Last fall, the United States Court of Appeals for the Fifth Circuit reversed the 2017 decision, reinstating the law. The U.S. Supreme Court got involved in early 2019, temporarily blocking the law hours before it was to take effect, according to the Advocate. Justices Kavanaugh and Gorsuch dissented from the decision to block it.

The Louisiana law has been compared to a similar law in Texas, which the Supreme Court struck down in 2016 with a majority of 5-3. That law also required doctors providing abortions to have admitting privileges at hospitals within a 30-mile radius. Chief Justice John Roberts notably was in the dissenting opinion on the Texas case, even though he joined the majority in the 2019 decision to temporarily block Louisiana’s law.

How Will This Court Rule on the Abortion Case?

The Supreme Court’s decision on this abortion case is expected by June of this year. While Justices Kavanaugh and Gorsuch provide a serious chance that Louisiana’s law might be upheld, there are a few points worth keeping in mind.

One is that Justice Kavanaugh did not specify a pro-life motivation for his dissent in 2019. In his explanation for dissenting from blocking the Louisiana law, Kavanaugh (the only justice who explained his reasoning) said that if the law had gone into effect, Louisiana doctors without admitting privileges would have had an opportunity to apply for them. The justice said he believed it would have been better to examine the case after the doctors knew whether or not those privileges would be granted, instead of basing a decision on speculations about the future.

Secondly, even though Chief Justice John Roberts voted for upholding the Texas law and then appeared to support an opposite position by blocking the Louisiana law, the reasoning behind his actions is unclear. As Liptak points out about the latter decision, “Roberts might have meant only to ensure an orderly process in which the Supreme Court, rather than an appellate panel, decides whether to limit or overrule a recent Supreme Court precedent.”

Regardless of the outcome of the case, the decision seems momentous. As the Advocate observes, people on both sides of the abortion debate “see the law as an opening to begin scaling back abortion access in the country.”