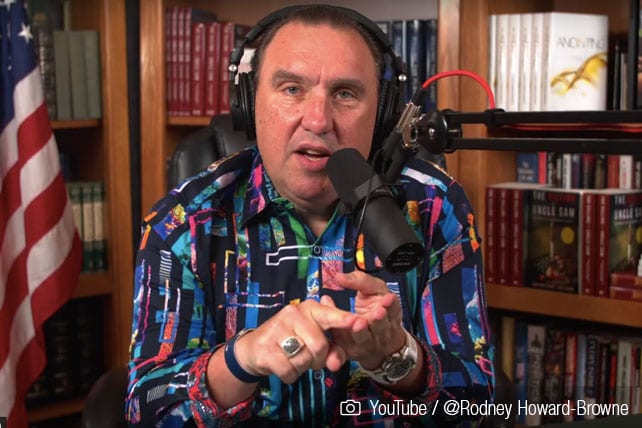 On April 1, Florida Governor Ron DeSantis signed an executive order that states attending churches and other houses of worship falls under “essential activities.” The order (which has caused some confusion) comes days after Pastor Rodney Howard-Browne of The River at Tampa Bay Church was arrested for ignoring a safer-at-home order from Hillsborough County. But despite the governor’s new order, the Florida pastor says The River is now closed and will remain that way.

“No one’s expecting me to make this announcement, but I actually have no choice,” said Howard-Browne in a Facebook video entitled “The Big Announcement.” Even though some people will say that he is caving by closing the church, the pastor counters, “No I’m not and let me tell you why I have to do this. I have to do this to protect the congregation, not from the virus, but from a tyrannical government because all the charges against me are totally bogus.”

Florida Pastor: This Is Like a Western Gone Wrong

The River at Tampa Bay Church will now be broadcasting services instead of holding them in person, and Howard-Browne says how long it will remain closed is up to Hillsborough County Sheriff Chad Chronister. The pastor said he made the decision to shut the church down on Monday, which was the day Sheriff Chronister arrested him.

The sheriff arrested Howard-Browne for choosing to hold two church services on Sunday, March 29, even though national guidance states that people should not meet in groups of more than 10. Howard-Browne was also violating a safer-at-home order from Hillsborough County issued March 27 that instructs people not to venture out of their homes except for essential needs, which did not include church services.

Arguing that the right to congregate falls under religious freedom and that the church is an essential service, The River held services Sunday anyway. These were attended by hundreds of people, some of whom the church even bused in. At a press conference addressing the pastor’s arrest, Chronister said that after learning the church planned to hold services despite the county directive, his office had met with church leaders and attorneys that Friday and Sunday.

The sheriff’s hope was to educate them on why they should not move forward with their services. When the church did so anyway, Chronister worked with Hillsborough County State Attorney Andrew Warren to secure a warrant for Howard-Browne’s arrest. The Florida pastor was charged with two misdemeanors: unlawful assembly and violation of public health emergency rules.

On Facebook, Howard-Browne said he was not going to get into the details of the case and that he has forgiven the sheriff. But, he said, “It did not happen the way they say. I’ve got all the documentation, I tell you, I know exactly what happened step by step.” He is not closing the church because of fears about the coronavirus, but out of concern about what the sheriff’s office might do if it remained open and because of other outside threats.

Blaming the media for blowing the story out of proportion, the Florida pastor said, “All our church people are getting threats, death threats. We’ve had people fire on the building at night from the highway. And this is crazy. It’s like, gone nuts.” Howard-Browne is concerned about “crazy people” showing up to the gatherings and causing problems. The pastor also said he didn’t want to risk law enforcement showing up at future church services and arresting other pastors and members of the congregation. The sheriff’s office has said it has no record of people firing gunshots at the church.

During Monday’s press conference, Chronister said that when members of his command team arrived at the church last Sunday, Howard-Browne was not available to talk to them. But the pastor has a different account of what happened. He said, “There was no communication between me or the sheriff. The sheriff has my phone number. That’s all I’m going to say about that. And we’ve been talking for weeks. So I’m just going to leave it at that….I’m getting threats all the time from the sheriff. For whatever reason, he’s after me.”

According to Howard-Browne, “The shut down of the church is not on me now. It’s on [the sheriff].” The Florida pastor said he holds Chronister responsible for shutting down “the body of Christ,” as well as the church’s food ministry. Elsewhere in the video, the pastor said the food ministry would remain active with a handful of people running it.

Howard-Browne maintained that he did not make his decision to close the church because of Sheriff Chronister. “I make decisions based on what the Lord tells me to do,” he said, “and the Lord told me on Monday, ‘If you don’t do this, there’s going to be a showdown at the O.K. Corral and it’s not going to be good.” The whole situation, said the pastor, reminds him of “some kind of Western movie gone wrong.”

To the point that since the pastor’s arrest, Governor DeSantis has said that churches do in fact provide an essential service, Howard-Browne responded, “It doesn’t matter what the governor does. It matters what the sheriff does.” Elsewhere in his video, the Florida pastor stated that the sheriff has more authority than the governor.