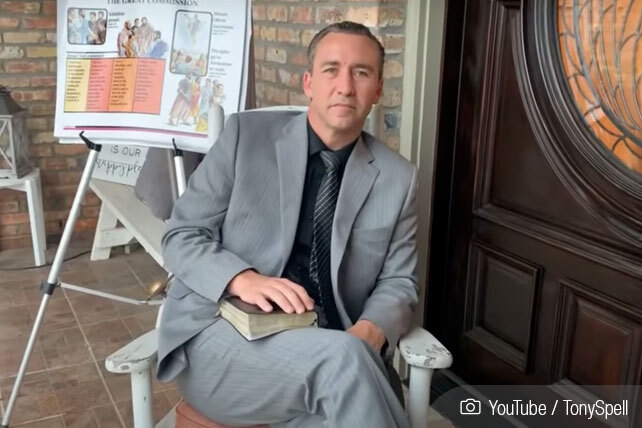 Pastor Tony Spell of Life Tabernacle Church in East Baton Rouge, Louisiana is still defying state government orders concerning church gatherings. Drawing more than 1,000 people at his services during the pandemic, Spell has already been charged with a misdemeanor and arrested for other aggressive actions. However, the embattled minister doesn’t seem to be slowing down, even as Louisiana Governor John Bel Edwards has loosened restrictions to allow churches to reopen at 25 percent of their normal capacity. Doubling down on his defiance, Spell announced he would open his church this weekend to 125 percent of its capacity and welcome guests from other states, including New York.

“We will comply with the Governor’s orders, whenever they sell popsicles in hell and set up an ice skating rink in the lake of fire and sell tickets for admission,” Spell said in a video posted to his YouTube account. “We will never comply with any anti-God, anti-church, anti-free-American Christian order that says ‘do not have church,’” the pastor emphasized.

The title of the video update is “Change of heart” because Spell says he has changed his position after telling reporters earlier that day that the church plans to comply with the Governor’s orders when hell freezes over, essentially. Instead of simply defying the Governor’s orders, Spell explained, the church plans to “become more vile yet and thus” by operating at 125 percent of the capacity specified for its building. Additionally, Spell said he is expecting visitors from Illinois, Indiana, California, Georgia, and New York (a new state for the church).

The pastor promised to “preach the unadulterated word of God from an unfettered tool kit with boldness that will cause Satan and his imps to cower back into the lake of fire where they belong.”

Louisiana Governor Moves State Into Phase One of Reopening

Louisiana Governor Edwards moved the state into phase one of its reopening strategy starting today, May 15, 2020. Under the Governor’s order for phase one, churches are allowed to operate at the aforementioned 25 percent of capacity so long as they follow strict social distancing guidelines. The order also stipulates churches may hold outdoor services.

However, Spell says the idea of holding church outside isn’t a good one, pointing in the video to the thunderstorms currently enveloping the “liquid sunshine” south. Spell noted the storms are forecasted to last until Monday. “This is why we will never comply with the Governor’s orders to move church services outside,” Spell said, raising his voice.

The pastor also drew attention to the ankle monitor he has to wear during his house arrest. He is currently in a legal battle on a few fronts. One being a misdemeanor charge for holding services despite Edwards’ orders. The second is an aggravated assault charge for backing a bus near a protestor who was demonstrating outside his church. Finally, Spell is suing Louisiana Governor Edwards and other local officials for the ban on gatherings, which he attests unfairly targets churches. In the video, Spell mentioned he had attended a federal trial earlier that day with his lawyers that lasted an hour and 44 minutes. At the moment, it is not known what the outcome of that trial might be.

For now, Spell says, “we continue to do what we do with a change of heart that says ‘Let’s do more of it’ in Jesus’ name.”