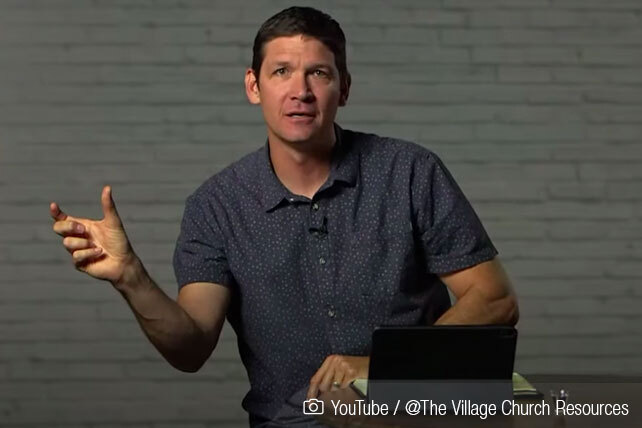 In a sermon he gave on June 7, Pastor Matt Chandler of the Village Church preached from Ephesians 1:15-23 on the theme of growth, highlighting the importance of believers growing in their knowledge of and hope in God, as well as their experience of his power. Toward the end of his sermon, Chandler spent some time unpacking the phrase “his glorious inheritance in his holy people” in light of the current racial unrest in our country.

“Our inheritance and what we are being robbed of as believers in Jesus Christ right now, in this moment,” said Chandler, “is the unity of spirit between all ethnicities born of the gospel of Jesus Christ.”

Pastor Matt Chandler: We Have Given Up Our Inheritance

We know that through his blood, Jesus has purchased us a spiritual family from every “nation, tribe, people and language.” If, said Pastor Matt Chandler, you study the civil rights movement in the 60s, you will notice something interesting—namely that the church played a crucial role in that movement. In fact, Dr. Martin Luther King, Jr., established a pattern of meeting at churches, praying, and then marching.

Chandler said that when it comes to the present racial unrest in our country, “one of the things that has happened is the church by and large has refused to participate, which means that we have turned over, God help us, we have turned over what is our inheritance to dark ideologies.”

The pastor believes we have no business critiquing what is happening in our country when we have given up our inheritance of fighting injustice on behalf of the vulnerable. “You cannot point out all the flaws in this current movement when you have abandoned the place that we were meant to play,” said Chandler, adding that neither can people “ignore the sorrow and lament of 12 to 13 million image bearers in our country. You can’t do that! We mourn with those who mourn.”

The pastor did not downplay the problems that exist in some of the current movements, although he did not name any specifically. He said, “Yes, there are demonic and evil ideologies at play, but that’s where the people of God are meant to run with light and the good news of the gospel of Jesus Christ, not to sit back and snipe via social media.”

Chandler’s comments fit within his overall message of the importance of growing in our hope in God as Paul encourages us to do in Ephesians. Paul would not pray this for us if it were impossible, said the pastor. We must grow in hope that God can and will heal racism and the turmoil we see unfolding around us. In Ephesians 1:19, right after he mentions our “glorious inheritance,” Paul refers to God’s “incomparably great power for us who believe.” Some translations call God’s power “immeasurable.”

“Can we just talk about how powerful that is?” asked Chandler. As Paul goes on to explain, that power is so great that it raised Jesus from the dead. And it is this power that all followers of Jesus take with them into every area of their lives.

No matter how well we understand what God has given us, we can always internalize it even more. In verse 15, Paul says he has heard about the Ephesian believers’ faith in God and love for one another. That is a lot to be thankful for and you might think the apostle would be satisfied with it, said Chandler. But Paul’s response to hearing of the Ephesians’ faith and love is to want them to have even more of both. Said Chandler, “He wants them to grow in knowledge.”

“This growth in knowledge is both experiential and believing by faith,” said the pastor, emphasizing that we need to believe in God when we don’t feel like it and to yearn for an experience of God, as Moses did when he asked God to reveal to his glory. “Don’t either/or when you should both/and,” he said.

Chandler believes the Western church has a tendency to overly focus on believing the gospel to the neglect of experiencing God and that “this is why so many Christians are bored.” No matter where we are in our spiritual journeys, we can always seek a deeper knowledge of God that will lead to greater unity in the church and love for our neighbors.

“The triune God of the universe is an inexhaustible well,” said Pastor Matt Chandler. “There’s more for you right now.”