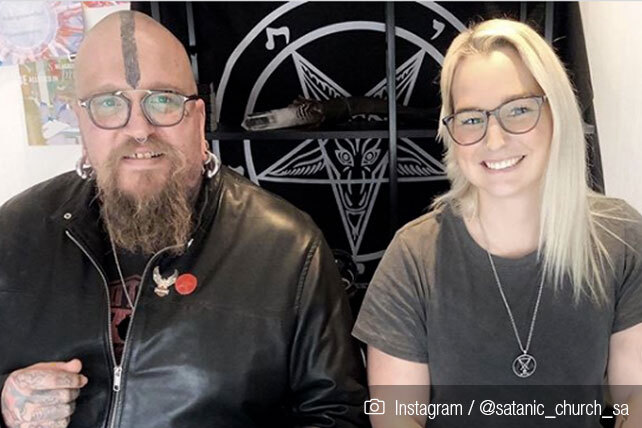 In February 2020, Adri Norton and Riaan Swiegelaar co-founded the South African Satanic Church, which is the first satanic church in the country of South Africa. Despite what some people think, Swiegelaar says the church is not anti-Christian and its members have no interest in converting people to Satanism—he does not even believe it is possible to do so.

“I completely understand where you guys are coming from,” said Swiegelaar in a video addressed specifically to Christians. “I myself come from an extreme Christian background, and I have been involved in Christian ministry in the past.”

Saying there’s been social media “hysteria” surrounding the new church, Swiegelaar wanted to clarify that “our mission at the South African Satanic Church is certainly not to convert Christians to Satanism or, as a matter of fact, other people to Satanism as well.” He added, “Satanists are born Satanists.”

Why Start a Church for Satanism?

Swiegelaar, who is 39, told IOL News that he got involved with Satanism four years ago when he read Anton LaVey’s Satanic bible and resonated with what it said. He started connecting online with others who felt the same, which is how he met Norton, who is 32. She was also drawn to Satanism when she read LaVey’s bible and felt that it validated her experience and identity. This, say the two, is how people know whether or not they truly are Satanists. They wander through different belief systems until they realize that Satanism is what they have been looking for all along.

Together, Swiegelaar and Norton decided to open a satanic church in Century City in Cape Town with Swiegelaar as the presiding reverend and Norton as the church’s spokesperson. Their church is not affiliated with the Church of Satan or its offshoot, the Satanic Temple. The leaders say that one of the main reasons why they decided to open a church at all is because of how they see Satanism being misrepresented in the media and in culture.

In a video explaining the origins of their church, Norton said, “Learning about Satanism was one thing, realizing ‘I am a Satanist’ was one thing. The biggest moment for me was when I realized that Satanism is being used as an excuse for people to blame their own behavior and their criminal behavior on Satan or Satanism in that sense. And there wasn’t a body or a federation or some form to represent Satanism in that way.” Since she and Swiegelaar started the church, Norton has been struck by how many people have reached out, thanking the founders for making it easier for them to be themselves.

Norton and Swiegelaar explained to IOL that contrary to what some might think, they do not perform sacrifices, nor do they believe that Satan is an actual demonic being whom they should worship. “As it clearly states in the Satanic bible, which is our doctrine, we do not practise or condone human or animal sacrifice,” said Swiegelaar. Rather, the focus of their religion is on personal freedom, autonomy and self-expression. Their website states, “Satan to us is a symbol of Pride, Freedom and Individualism, and it serves as a projection of our highest potential.”

The key difference between Satanism and other religions, said Norton, is “there is no external being that you are worshipping…everything comes back to you and your center and who you are and expressing the best version of yourself, the highest potential of yourself.” According to the website, “We don’t spend our lives living in guilt, or waiting for someone to punish us for who we are. We accept all consequences of our actions. We are the only ones whose forgiveness we need. Hail Yourself! Hail Satan!”

The two leaders were reluctant to say how many people were currently members of their church, but did say that in the month of June alone they had over 300 new applications. When reviewing applicants, Swiegelaar and Norton do not accept anyone who talks about Satan as though he were a real being. They also do not accept people who are hostile to Christianity and are seeking to join the satanic church because they have been wounded by Christianity. Swiegelaar did, however, ask Christians who are concerned about the satanic church to instead consider praying for all of the people who have been hurt by Christianity, such as women and children who have been subjected to ongoing abuse in God’s name.