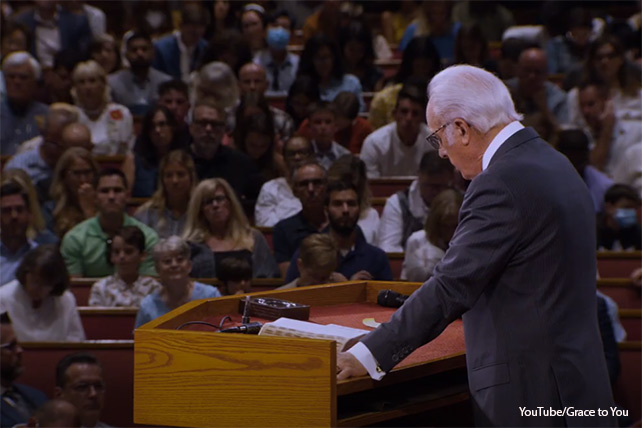 Last week, John MacArthur and Grace Community Church, which is located in Sun Valley California, announced they would not be adhering to California Governor Gavin Newsom’s second round of closure orders. In his announcement, “Christ, not Caesar, Is Head of the Church”, MacArthur informed civic leaders that they had exceeded their legitimate jurisdiction, and that “faithfulness to Christ prohibits us from the restrictions they want to impose on our corporate worship services.”

On Sunday, July 26, 2020 Grace Community Church had its doors open for worship. The pews were filled with people, most of whom were not wearing masks. They sang songs (which is currently banned in indoor spaces in most of California) , and listened to their Pastor John MacArthur preach a sermon that reiterated statements he made previously that week in the announcement.

MacArthur started the message entitled “We Must Obey God Rather Than Man” by saying that many people don’t understand why the church is choosing to gather. The world does not understand the importance of the church, he explained. “The World doesn’t understand that it’s not just essential, it’s the only hope for eternal life, for doomed sinners. People have been very concerned to make sure people’s physical lives are protected, in the process shut down places where there is hope for their spiritual lives.”

“We are the light of the world and we need to be set on a hill,” MacArthur said as he preached out of Matthew 5:13-16. “That’s why we’re here today. This is our hill and the light will shine. This is our calling.”

MacArthur gave Biblical examples of civil leaders that through history have abused their power, and tried to take authority in God’s kingdom. “Pharaoh abused his authority of Israel, and he was drowned.” He cited, “Saul overstepped the limits of his God-given sphere and lost his throne.” Continuing on he said, “Solomon corrupted his reign with gross immorality and destroyed the kingdom. Subsequently, all the kings in the north (Israel) were evil, and there were nineteen in a row that came under the judgement of God.” Likewise explaining, “Fourteen of the twenty kings in the southern kingdom of Judah were evil. Overstepped their bounds, and came under the wrath of God along with the people who were their subjects.” He then cited two more Old Testament rulers, “Nebuchadnezzar exalted himself above God and became a mad-man. Belshazzar exalted himself above God and suffered the consequences.” In the New Testament, “Herod became proud, overstepped his limits, and was instantaneously eaten by worms.”

We Must Obey God Rather Than Men

Pastor MacArthur then went on to explain from the book of Acts what Peter and the apostles came up against while preaching in Jerusalem. The rulers of that day told them they could “not speak or teach at all in the name of Jesus,” and Peter and John told the rulers (vs. 19, 20) they could not stay silent about what they had seen and heard in the person of Jesus. Later in chapter five they were arrested and put in prison (vs. 17-20) for continuing to preach and spread the name of Jesus. That night an angel from the Lord opened the prison doors and told them to ‘Go and stand in the temple and speak to the people all the world of this Life.’‘ So they went to the temple at daybreak and began to teach. MacArthur then emphasized what the angel of the Lord told them to do although they were told by the rulers not to do so, “Go right back to the most public place and start preaching again. Orders from heaven.” When Peter and the apostles were brought before the ruling council and asked why they defied their orders not to teach in Christ’s name they all responded, “We must obey God rather than men.”

We Have The Responsibility to Obey Our Leaders

“God has ordained human government for the peace and well-being of temporal society.” MacArthur said, citing Romans 13. “We are to submit to them in the sphere as to which God has designed them to operate. We are to honor them. Show them respect…and pray for their salvation.” Explaining that when orders from our government contradict our King’s orders, MacArthur says, “We have to obey God, rather than men.”

MacArthur addressed a question the church leadership has been asked a lot: “Why didn’t you do this at the beginning?” (IE: Defy the first stay-at-home order). He said, “We didn’t know the extent of the disease. We were told millions were going to die.” They were being protective because that was the sensible and rational thing to do given what everyone was being told about the coronavirus. “As time went on we found out that the virus wasn’t as deadly as predicted, and the commands not to assemble didn’t apply to protesters and riots.”

“Little by little. Sunday by Sunday. You kept coming back.”

Grace Community Church didn’t send out an order telling people to come back to church. The congregation laughed as MacArthur humorously said, “You just kept showing up. The first two weeks I preached to no one. I preached to Patricia [his wife]…which is pretty routine for me.” By the third week there were people that started to just come, and each week continued to grow more until the church was full again. “Why did you come back?…You came back because your heart cries out to be here. This is where you live, and move, and have your being. You came because you’re not afraid, because God takes care of all us…The unanimous will of the people has expressed itself,” he said.

Phil Johnson, who is the executive director for Grace To You and has edited many of John MacArthur’s books, also explained via Twitter why Grace Community Church doesn’t meet outdoors to comply with the orders given by California’s government: